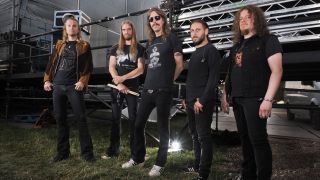 Mikael Åkerfeldt [vocals/guitar]: “It’s an intro. It’s a lovely intro! I wanted a Spanish or Mexican feel to it. Mendez (Opeth bassist, Martin Mendez) had a name for it… he called it Pepé! (laughs) It has some spoken word going on, so it needed something that would fit with that. It has the most simple melody you can think of.”

Fredrik Åkesson [guitar]: “It has a definite Ennio Morricone vibe, I think.”

Mikael: “The title came when I read up on Persephone and checked out who she was… there’s a love story between her and Hades, at least from his point of view, and it just worked with the mood of the album. I guess she’s a sorceress too.”

Mikael: “I started this song with the little fusion-esque introduction, two riffs and there’s no guitar. I wondered ‘What happens now?’ I tuned down, so I had two A strings, effectively, and I was just fooling around and I came up with the opening heavy riff. It’s a trick, really. I hope someone will hear the start of the song and think ‘Oh, not another fusion song!’ and then the riff comes in…it’s really heavy. It’s a catchy song but it doesn’t have a chorus. It’s very heavy, almost stupid meat and potatoes. I think it sounds like you’re about to be beaten up [laughs]. The song ends with a melodic part which was very influenced by Abba. And then it ends with the biggest chord ever!”

Mikael: “This was the first song I wrote for this album. It’s kind of an Opeth standard, in a way, like from the last two albums. It’s very dynamic. It has a chorus, I guess. Then there’s a big Queen-sounding bit in the middle just before this massive solo… oh, and harps! They’re hidden in the mix but they’re there. The title comes from the band Caravan – they were originally called Wilde Flowers. I always liked those weird spellings.”

Will O The Wisp

Mikael: “It’s a song inspired by Dun Ringill by Jethro Tull (from the album Stormwatch, 1979). I wanted to do a song with my capo really high, so it’s up on the fifth fret. It makes the guitar sound really glittery. I just wanted to go for a simple, catchy vocal melody. It has a slightly positive vibe to it, but the lyrics are really, really dark. It’s a beautiful song, I think. I’m really happy with that one.”

Mikael: “This one had the working title Shuffle. It’s a meat and potatoes heavy rock song. I call it the sausage! When you looked on the computer grid, the song looked like a big solid, sound sausage! (laughs) So it’s really not dynamic. It’s a hard rock or metal song. It’s got some interesting twists and turns in terms of the chord progressions, which make the vocal melody go where you don’t expect it to go. Then we phased the drums at the end so it’s swirling around. There’s a great solo duel between Fredrik on guitar and Joakim (Svalberg, Opeth keyboard player) on the organ. I really love that part.”

Mikael: “It’s another early one, the third song I wrote for the album. It has a lot of falsetto singing and harmonies. The singing is all me. The lyrics go ‘Are you gonna love me when I die?’ …you know, that sort of thing! (laughs) It’s beautiful. There’s not much to say about it, really. I wanted the end to sound a bit like Black Mountain Side (from Led Zeppelin’s 1970 debut), if that makes sense.”

Mikael: “That was inspired by the band Family. They have a song on their Entertainment record called Summer ’67, and it has Middle Eastern scales, which I love, so I wanted to do something like that, with strings. It’s almost entirely instrumental until the very end. The strings were done by Will Malone, who produced the first Iron Maiden record. He also did strings for Sabbath and he’s done things like Joss Stone and The Verve too. He put out some great solo records, including one I paid about £1,900 for! I got in touch with him to see if he had any more copies of the record, and also as a way in (laughs). He asked me to send him the track and he loved it. He kept my original arrangement, too. He wouldn’t take credit for the string arrangement. It was a pleasure to have him on there – it sounds really great.”

Mikael: “That’s one where Fredrik came up with the theme that repeats. It had a completely different arrangement.”

Fredrik: “Yeah, I recorded a completely different version of it. It was a more evil version of Dazed And Confused by Led Zeppelin, but it turned into something totally different.”

Mikael: “When Fred plays me something, I look for what we can turn into a song and what’s going to happen next, and that theme was perfect. We rearranged it and then I added the middle section, which is a crazy Mahavishnu Orchestra-style thing… and then it changes into a really bluesy part. That was inspired by Cream, which explains the title. I was listening to Disraeli Gears a lot. I even tried to get that guitar tone.”

Fredrik: “I always really enjoy it when me and Mikael do trade-off solos. We do these long bluesy solos – Mikael does the first one. That’s really fun.”

Mikael: “It’s very British sounding. It reminds me of Queen and Porcupine Tree and Pink Floyd. It’s one of my favourite songs we’ve done. It’s a very light-sounding song but the lyrics are very dark. It has a big ending and a nice build-up. The middle section has a heavy riff that makes me think of Toto! I’m particularly happy with that. And we have harpsichord on this song, which is a first for us. We weren’t sure if we wanted it at first, but once we tried it out it sounded great. It definitely has that feel of British psychedelic music.”

Fredrik: “I remember when we recorded the guitar rhythms for that, because it goes on for such a long time! I had this blister on my finger and it was going to explode at any moment. I just kept going and it never exploded! (laughs)

Mikael: “People are either going to hate that song or absolutely love it. It’s a contender for a single. The first single will be Sorceress, the second will be Will O The Wisp and then, I think, Era.”

Mikael: “It’s not really a song, just the last part of Era, really. The ‘slight return’ bit in the title is a tribute to Hendrix, of course. Once the album has done, the sorceress has calmed down and stopped being vicious and that’s what the outro is about!”

Digital pre-orders of Sorceress are available via iTunes, Amazon and lovely vinyl and bundles from http://store.moderbolagetrecords.com/