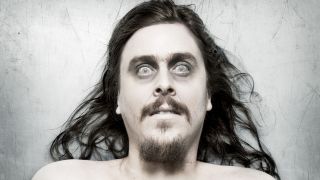 The Swedish progressive metal titans are this month’s cover artist. So, for those of you less versed in the art of the Åkerfeldt, we got Features Editor Amit Sharma to make you a beginner’s guide to Opeth.

As you’re no doubt aware, Opeth are the cover stars on our latest issue where we talk to Mikael Åkerfeldt about being the rebellion to metal. Pick up your copy here.

In case you’ve been living in a cave somewhere on the outskirts of Mordor with very limited wi-fi, Opeth are a band from Stockholm that formed in 1990. And for those that haven’t heard the band’s music before, Heir Apparent would be a great starting point: a thrilling nine-minute masterpiece that showcases their ability to craft labyrinthine structures that venture through the blackened pits of death metal to more mellifluous folk and prog-driven sounds.

In Mist She Was Standing

Back to the beginning. If the 14-minute opening track on Opeth’s recording debut served as anything of a mission statement, it demonstrated fearless musicianship unafraid to embrace the unorthodox and venture beyond usual confines. Mikael was still in his teens when this was written and recorded. The word genius certainly comes to mind.

Opeth’s fourth studio album marked a turning point in their sonic evolution, as the band spread their wings in search of more complex and ethereal musical philosophies.

The title track from Opeth’s fifth record is undoubtedly one of the greatest creations to come from Mikael Åkerfeldt’s mind. It’s a brooding masterclass in modern death metal, bursting with earth-trembling paradoxes that threaten spin the universe off axis.

The sister album to the much heavier Deliverance, which came out the previous year, Damnation was defiantly experimental – eschewing the death metal growls and blastbeats in favour of 70s prog worship, inspired by bands such as Camel and Pink Floyd. It remains a fan favourite to this day, especially for the sheer sonic majesty of songs like Hope Leaves: ridden with heartache, vulnerability and dysphoria.

Having just inked a deal with Roadrunner, Ghost Reveries saw the band with plenty of wind in their creative sails as they continued to blur the lines between death metal and prog, aided by keyboardist Per Wiberg joining the band full-time. Reverie/Harlequin Forest is a perfect example of just how expansive their sound had become.

The Lines In My Hand

In quite possibly the boldest move of his career, a frustrated Mikael Åkerfeldt deleted his new demos and decided to start again, this time pushing his art to its very limits and experimenting with more jazz-rock and fusion-based ideals. It was a move that angered a small yet vocal minority of fans into raising the question of whether Opeth were still indeed a metal band. Experimental band goes experimental… the rage!

Opeth’s new album, due for release on August 25, feels heavier and more cohesive than its predecessor, though with little indication of a band backtracking. It could easily have been an apology record – a crowd-pleasing return to more extreme roots – but the Swedish prog metal kings have unveiled yet another kaleidoscopic masterpiece for us to unravel.

We also asked Mikael to review a One Direction gig for us. Read it here.