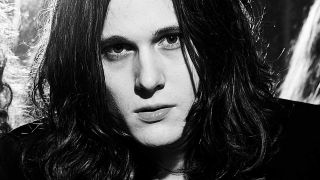 "It's a bitch of a task…” grins Tyler Bryant as he earnestly whittles down an enormous list of records, wincing slightly at the ones he has to cut.

We’re speaking to Bryant at Snakefarms’s offices in Kings Cross. The label released his latest album with The Shakedown, Truth And Lies, in June, and it's a heavier, gnarlier monster than their previous records. But it’s also a profound reflection of Bryant’s full musical palette, where the likes of Tom Waits, Nick Cave and Chris Cornell sit alongside classic rock and blues.

Let's see what he picked.

Truth And Lies is out now.

"The first record I heard by Chris Whitley was Din Of Ecstasy, and it took me a couple of years to understand it. But then I got into his Living the Law record, and then this Dirt Floor album. It was just recorded in a day, in a barn, with one microphone. Just him and a guitar. I love it."

The Black Crowes - By Your Side

"That was one Audley Freed played on. I saw the Black Crowes when I was 15 when they opened with HorseHead, and when we started the Shakedown that was our walk-on song for the longest time. I loved it.

"They showed what can be done with the blues; I tell people that when I saw the Crowes it was like the blues with long hair and more distortion, and louder. The Black Crowes inspired me to play rock’n’roll, hands-down."

"I heard this record on one of the crew buses on the first tour I did with Jeff Beck. The Shakedown were together but we didn’t have a name yet, and I was doing an acoustic tour. The Shakedown was rehearsing at SIR Nashville when I got the call, and my manager pulled me up into the hallway and was like, ‘we got a tour with Jeff Beck but it’s just you.’ So I had to go into the room and  say ‘sorry guys, it’s just me’...

"But his front of house guy at the time was this guy called Ben Findlay, and he started playing some Tom Waits songs, including House Where Nobody Lives, which was off Mule. And that song is still to this day one of my favourite songs. Can hardly listen to it without weeping. It just floors me. And that record has so many good songs on it – Hold On, Get Behind The Mule..."

"That’s got Be Careful With A Fool and the live recording of It’s My Own Fault. These were crucial recordings for me as a kid - I used to listen to them every day before school. I learned to play slide guitar from a lot of the Johnny Winter stuff too, so he was a very important guy for me."

"It’s so hard to pick one by him, but that’s the one that I’m choosing today. And whenever Nashville flooded - was it 2011 I think? - the water was rising in my house so I was putting guitars in the attic, and our band trailer floated away… and so I’m kinda putting stuff in a bag and going ‘ok, well if this house ends up under water what will I wanna keep?’

"Wildflowers was the record I took. So that would literally be the desert island record! It’s got all of the vibes, it’s got the chill-out vibes, it’s got Honey Bee for when you wanna rock."

"It’s got Boogie Man on there, Help Me Through the Day, some of that stuffs so amazing. And I’ll just go on record saying that to narrow this down to ten I did have to eliminate Albert King’s Blues Power, and BB King’s Live at The Regal. But today I chose to stick with Freddie King. And also the Albert King with Stevie Ray Vaughan In Session record, because I’m a huge Stevie fan and to hear them playing off each other… I’m sorry, I’m trying to make this a 15 list!"

Soundgarden - Down On The Upside

"Obviously I love Soundgarden. I’m really into the Chris Cornell solo stuff too, like Euphoria Morning. We actually got to play with him, and it was probably the coolest thing that ever happened, like ever.

"So Graham and I got invited to play at this private party for Jimmy Page, where we got to play a Led Zeppelin/Yardbirds medley for Jimmy Page and a lot of his friends, and Chris Cornell is one of Jimmy Page’s friends… and he was doing a two-song performance for a film premiere.

"It was originally just one song, and we got asked to learn this song and we did, and then the day before we got to fly to Dallas to rehearse with him, and they were like ‘will you guys do Hunger Strike by Temple Of the Dog too? And Tyler can you sing the Eddie Vedder parts?’ And I was like ‘yes I can! [rolls eyes in mock nonchalance, but can’t stop grinning...] oh well, if I have to!’"

Muddy Waters - The Best Of

"I don’t actually know the exact name of the album, but when I was a kid I got it at Walmart. It was one of those $5 front-of-the-rack blues albums, and I believe it was just a best of collection, but it had Can’t Be Satisfied and Walking Blues. And Mojo Workin’, which we’ve covered - that’s kind of a staple in our set now.

"I’m a huge Muddy Waters fan, and I learned to play slide from him. I got hip to Muddy Waters through my love for Johnny Winter, because Johnny Winter produced that record Hard Again for Muddy Waters, and you can hear them playing off each other in the studio and kind of egging each other on. It was so cool."

"That was one of the first ones I heard. I had the album cover hanging up, which is still there in my childhood bedroom in Texas. Jeff was one of the people who inspired me to play a strat. He’s a hero of mine, and I feel so lucky that I got to play with him and have remained good friends with him through the years."