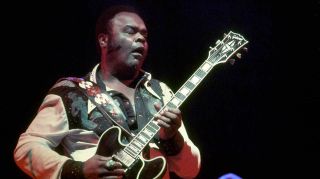 “Freddie King is an absolute monster in the blues world,” says Black Stone Cherry mainman Chris Robertson. “From his first playing to his powerhouse voice he was the total package. It’s no wonder the music Mr. King left us with continues to influence all genres of guitars players and — and singers — whether they know it or not!”

It’s perhaps appropriate then, that Black Stone Cherry’s new Black To Blues EP pays features a cover of King’s Palace Of The King. Written by Leon Russell and two Stax Records legends — Mar-Keys saxophonist Don Nix and Booker T. and the MGs bassist Donald ‘Duck’ Dunn — the song was first released in 1971, and has since been covered by artists including John Mayall, Leslie West. Kenny Wayne Shepherd and Stone The Crows.

Black To Blues not only pays tribute to King, but features covers of songs by Howlin’ Wolf, Muddy Waters and Albert King. It’s available now.

This is one of Freddie’s most famous works in the rock’n’roll world, and has been covered by many artists. The drive in this song is absolutely crushing!

Woman Across The River

This song starts out with a nice backbeat groove, and Freddie delivers his signature sounds, both vocally and with the guitar! The kicker to this one is the way the change happens for the chorus, where the entire groove changes flawlessly!

Palace Of The King

This song has a groove like a freight train! It chugs along, never letting up. And the breaks are so impactful. The song has a great guitar lick for the backbone of the song. We slightly manipulated this on our version to make it a tad more like what we would do!

In this song Freddie was feeding off of the funk! This song has that infectious phased-out guitar lick that you either move to or you don’t move at all! Ha! His vocal performance on this song is as good as anyone could have ever sang it! And the guitar solo is on fire!

Have You Ever Loved A Woman

This……this song alone would be a good enough reason for me to give Freddie the title, “King of the Kings”! Vocally, guitar, it’s all there, as is the case with all of Freddie’s material (in my opinion!). But this song is just something special.