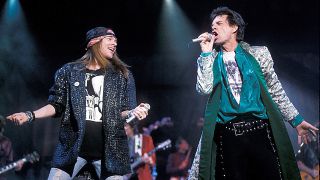 Axl Rose has done more than guest with AC/DC for a tour, he’s stepped up to the mic to guest with some of rock’s most iconic performers! Here are ten collaborations that show Axl at his best.

Although Guns N’ Roses didn’t feature in director Penelope Spheeris’ The Decline of Western Civilization Part II: The Metal Years documentary, being a little busy taking over the world while she filmed in their adopted LA hometown, Axl, Slash and Izzy lent their talents to the soundtrack’s opening track, a revamped version of Under My Wheels from Alice Cooper’s 1971 album Killer.

Cooper later returned the favour by trading vocals with Rose on The Garden, from Use Your Illusion I.

With Tom Petty, at the MTV Video Music Awards, 1989

For Guns N’ Roses, the 1989 MTV Video Music Awards were less significant for the fact that they picked up the Best Heavy Metal Video for Sweet Child O’ Mine than for the post-Awards punch-up between Motley Crue frontman Vince Neil and Izzy Stradlin (“I decked him good…he fell to the ground like a tipped cow,” wrote Neil memorably in The Dirt) which led to much cock-waving posturing between the two camps for years.

Before such macho shenanigans though, Gn’R’s vocalist showed his more sensitive side, with a striking two song cameo with Tom Petty, which doubtless further endeared him to America’s heartland.

Guns N’ Roses made no secret of the debt they owed to Finnish glam-punks Hanoi Rocks: “If Hanoi Rocks had reached the success they should have,” Axl Rose once said, “no-one would ever have heard of Guns N’ Roses.”

In addition to encouraging Geffen (via their UZI Suicide imprint) to re-issue the Finns’ out-of-print albums, Axl offered payback of sorts with his cameo in the video for frontman Mike Monroe’s 1989 single Dead, Jail Or Rock N’ Roll, helping push Monroe’s second solo album, Not Fakin’ It, into the Billboard 2000, even though he didn’t actually sing on the album.

When the British rock legends rounded off the first leg of their hugely successful Steel Wheels tour with a pay-pre-view cable TV special, promoted by one Donald Trump, they roped in a few pals for the occasion, old pals Eric Clapton and John Lee Hooker and young guns Axl Rose and Izzy Stradlin.

Watching Rose and Mick Jagger trade vocals and swivel-hipped stage moves is genuinely compelling, the young buck arguably outshining the old master in a fascinating face-off which emphasised that a major new talent had arrived.

Trading on his legendary status with the hard rock community, the Sex Pistol’s guitarist roped in celebrity pals Nikki Sixx (Motley Crue), Ian Astbury and Billy Duffy (the Cult) and Axl to help out on his gleefully thuggish 1989 solo album Fire And Gasoline.

Jones is no singer, so Axl’s contributions to Did U No Wrong make this one of the album highlights.

Axl once identified Eagles man Henley as one of his favourite singers from the 1970s, so when his Geffen Records labelmate asked him to chip in backing vocals on his third solo album, the Guns’ man turned in a respectful, understated performance.

That Rose was clearly not over-awed by his hero was evident just weeks after the recording session, when the singer called Henley to ask him to sit in on drums with his band for the American Music Awards, as Steven Adler was in rehab. “Getting that hot that fast can be hard on your head,” Henley noted sagely. “Selling eight million copies of your debut album will mess you up.” Wise words.

Guns N’ Roses ascendancy into rock’s premier league was confirmed with their appearance on this all-star bill saluting the memory of Queen’s iconic frontman, who passed away six months previously. After leading the LA band through their own brief (two song) set, Axl joined one of his life-long heroes, Elton John, to lend his vocals to a memorable performance of Mercury’s definitive composition. Rose also fronted Queen for a version of We Will Rock You later in the show, but this was the moment which proved the Gn’R frontman could stand toe-to-toe with the big boys.

With Bruce Springsteen, at the Rock And Roll Hall of Fame, January 1994

Days before the 1994 Rock And Roll Hall Of Fame Awards ceremony a massive earthquake hit host city Los Angeles, meaning a host of guests had to miss out on the celebrations. Nothing, however, could stop Axl and ‘The Boss’ paying tribute to inductee John Lennon with a curious reggae-fied version of The Beatles Come Together. ‘Interesting’ rather than ‘essential’, we might suggest.

With Gilby Clarke, on Dead Flowers, 1994

When Guns N’ Roses man Gilby Clarke was offered a solo deal by Virgin in 1994, his bandmates rallied to his side, turning up on no fewer than eight tracks on his debut album Pawnshop Guitars. The pick of the bunch was Axl’s cameo on Jagger/Richards standard Dead Flowers, which would have fitted in neatly alongside Izzy Stradlin’s contributions to the Use Your Illusion double-set. Somewhat ironically though, Clarke would never record an original song with Gn’R.

With Sebastian Bach, on Back In The Saddle, 2007

Back in 1990 a proposed collaboration between Axl Rose and Skid Row heart-throb Seb Bach would have broken the yet-to-be-invented internet, but by 2007 the two artists’ stock was rather reduced: the duo’s cover of Aerosmith’s Back In The Saddle on Bach’s 2007 solo album Angel Down limped into the Billboard charts at number 191. It did however, cement the friendship between the two singers, to the point where Rose dragged his old pal around the world for regular cameos on the Chinese Democracy tour.

Angus Young: Having Axl Rose in AC/DC means we can change the set