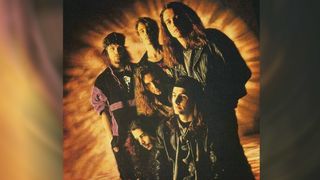 Temple Of The Dog

This year marks the 25th anniversary of grunge breaking through from the backstreets of Seattle to become a worldwide youth movement, making stars of Nirvana, Pearl Jam, Soundgarden, Mudhoney and others, and ensuring an entire generation decked themselves out in ripped jeans and plaid shirts.

One of the scene’s less famous but most enduring records is the sole release from Temple Of The Dog, a project put together by Soundgarden’s Chris Cornell and members of a nascent Pearl Jam in response to the death of Andrew Wood. Wood – the vocalist in Mother Love Bone with Jeff Ament and Stone Gossard – died of a heroin overdose on March 19, 1990, and Cornell began writing songs in tribute to his friend, the band completed by Pearl Jam’s bassist Ament, guitarists Gossard and Mike McCready and drummer Matt Cameron. But when their future frontman Eddie Vedder joined them on impromptu backing vocals, leading to a spine-tingling duet with Cornell on Hunger Strike, an already special record was elevated to something truly remarkable.

The band have played the occasional shows here and there, with Cornell joining Pearl Jam onstage a handful of times to perform Temple songs, but they never took it on the road properly, choosing to concentrate on the higher-profile Pearl Jam and Soundgarden instead – until now. As the self-titled album reaches its quarter-century milestone – having become more and more revered as the years have passed – Temple Of The Dog have announced their first ever tour.

Here Mike McCready looks back on the making of the record that gave him his start, and considers what the future might hold for TOTD…

Temple Of The Dog was your personal starting point in terms of things starting to take off. How do you feel about it looking back now?

Temple Of The Dog was the first time I was on a full-length record or was asked to be involved in one, and certainly one as poignant and as personal as this one. I was living in Los Angeles with my band Shadow and I got sick with Crohn’s Disease, so I moved back and I quit playing music altogether. After a couple of years I was wanting to get back in a little bit, and things just slowly started coming from there. Stone called me after Andy had died, and I had known him for many, many years. But when I was invited to actually do the Temple Of The Dog record – I think because Chris trusted Stone’s opinion of me – it was a mind-blower, especially hearing his demoes. I felt like I had jumped into the big league with the big boys.

It sounded so different to everything else that was going on at the time.

In terms of how Soundgarden sounded or the beginnings of Pearl Jam, or Mudhoney or Nirvana, it was more melodic, and more personal in terms of [Chris’s] relationship with Andy. It was very melodic and very interesting and introspective.

Was it a hard record to make given the circumstances that lead to it?

I think it was the most relaxed that I have ever been in terms of recording. It came out of a dark episode of Andy dying. I kind of got a career out of that, so that’s a weird paradox for me. I had seen Love Bone a bunch of times. I didn’t really know Andy but he was a very charismatic guy who put on great shows. Chris’s demoes were so good. Reach Down and Say Hello 2 Heaven, I just wanted to play them exactly how he did it. And I wanted to make sure I was being respectful to this record, because it was such a personal thing for Chris and for Jeff and Stone, I wanted to make sure that I played the best I could. There wasn’t any kind of like ‘we’re going to put this out and it’s going to be huge’, because nobody knew that. Seattle was just starting to get a buzz around it at that time. It was very beautiful how it was done.

You were all so young at the time, what was it like to to process those kind of big subjects?

You see your friends come and go over the years, and some die and some don’t. I was 24 years old when all that was going on, and I had been playing in bands since I was 11. I remember the day Andy died, we were all hanging out drinking beer with some friends of mine, and it was just a dark moment around Seattle. Which is dark anyways, but unfortunately he was one of many that had od’d that weekend because there was a bad batch of heroin apparently. You know, there’s no good batch of heroin but it was going around from what I had heard. But I was a young man and all of a sudden I was at the precipice of maybe my dreams coming true – getting to play on a major-label record.

What effect did it have when Eddie came in to do vocals?

We were just starting to play with Eddie and it was the second time that he had come up, and we were rehearsing the Temple record and Pearl Jam songs at the same time. Eddie was staying at the studio, so when we had practice one day we were going over the Hunger Strike song, and Ed just stepped up and started singing the lower part. It sounded really great, and Chris was like “hey, you take that part and go for it”. I think Eddie felt a little bit intimidated from being in Seattle, about how would he be received by the locals. I loved his voice and felt amazed to be playing with a singer that was that good – and not only one, but two! Chris invited Eddie into the scene in terms of taking him out to dinner and saying “hey, relax, you’re one of us”.

What was the the reaction to the songs from the public at the time?

It was kind of a slow burner. We had put it out and Soundgarden was busy working on Badmotorfinger, and we had our first record, Ten, we were working on that at the same time. There wasn’t any expectations [with Temple]. Chris was writing a few songs for Andy, and it turned into a couple more, and then Stone brought in some riffs for Pushin’ Forward Back and In Times Of Trouble. They had complemented Chris’s songs, so our mindset was just to put it out and there was no talk of touring or anything like that because we were all busy working on our careers. And then after we blew up they re-released the record and they edited Ed more into the video. The song was a slow burner and then it blew up when everything else blew up.

Was there ever talk of this being the main band, or was it always a one-off?

It was more organic than a band. Certainly in my mind I thought “wow, this would be a cool band to be in”. But at the same time I was also very excited to be playing with Jeff and Stone. Ed had just come up, and I felt like our unit, our five-piece was the best thing I’d ever been a part of, I felt very excited to be a part of our band. So the Temple thing was like “wow, that would be cool, but we both have our separate careers to do”. Temple was so organic, and it was from Chris’s heart, it didn’t come from trying to get radio airplay or trying to go on tour or sell merchandise or anything like that.

It’s grown in stature since its original release to become this sort of mythical record.

Over the years I’ve heard hundreds of people come up to me to say how much this record means to them, and it has grown into this mythical thing. That’s why we’re going to go out and tour and try to play these songs for the first time properly. We’ve only done a handful of shows in the beginning and then we’ve done a couple here and there with Chris since. We did a Mad Season & Seattle Symphony show that I put together two years ago, and Chris was singing some of Layne [Staley]’s old lyrics. And when we did some Temple songs, and Jeff and Stone came out and we did Reach Down and Say Hello 2 Heaven, and the crowd response was immense. We were surprised with how fast the tickets sold [for the Temple shows], but it has turned into something that’s bigger than all of us.

It’s the 25th anniversary of the record in 2016 - was that the thinking behind the re-release?

That’s the record company thing and I imagine that’s the thought process. Jeff had asked Chris at that Mad Season show two years ago if he wanted to take Temple on the road, and Chris had said yes. They may have discussed it before, but that’s the first I heard of it.

Is it daunting to tour it for the first time?

No, I’m totally excited about it. Reach Down, I get to have a big old solo on it. I’ve gotten to be a better guitarist hopefully than I was 25 years ago. I want to do a different take on that. And in terms of doing covers I think it’ll be exciting. I want to play Love Bone songs, I’m hoping that’s going to be part of it. To bring those songs to life, the Love Bone songs from Apple, and having Chris sing Stardog Champion or any of these great songs, will be poignant and, I think, important to people.

Will Eddie be guesting on the tour?

I haven’t heard whether he’s going to be a part of this or not. I would love it if Eddie would do it. It’s kind of up to him and Chris but there hasn’t been any discussion about it so far.

Are there plans for any new music?

I really hope so, I’d love to. If anybody wants to start writing for Temple Of The Dog, I will be there to play guitar if they want me. We haven’t had any discussions about that, but we’re very busy with our band right now and Chris has been on such a long tour, so he’s been very busy. So in terms of timing, who knows, But I hope we can do new songs.

The Grunge Quiz: how well do you know the 90s most subversive genre?