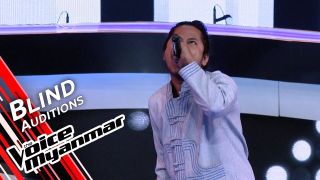 Global reality talent television show series The Voice has been proving to be metal-friendly lately, with a female metalhead taking to the stage and nailing frontman Randy Blythe's vocals in a cover of Lamb of God's Ghost Walking on Germany's edition of the popular show, one Finnish contestant covering Slipknot on the Finnish version a couple of years back and Necrophagist featuing on The Voice Quebec.

Now, metal is being represented once again, this time on The Voice Myanmar. Novem Htoo took to the stage with a rendition of Slipknot's Spit It Out during the "Blind Auditions" phase where contestants sing to gain the tutorship of industry professionals without the potential tutors seeing them until they turn their chairs to indicate they are up for tutoring the amateur – and therefore guaranteeing the contestant is a place at the next level of the competition.

Novem nailed Corey Taylor's vocals and had his pick out of the four coaches, as every single one swung their seat around to fight for the chance to take the young metaller under their wing.