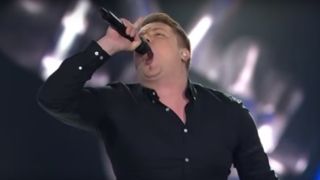 It’s become something of a trend for TV talent show contestants to blast out some heavy metal. From covering Suicide Silence on Romania’s Got Talent to Necrophagist on The Voice Quebec, the faith is being defended on our screens for all to see. And now Finland wants to get in on the act.

On the Finnish version of The Voice, metal fan Jani Korpela blasted out a rendition of Slipknot’s Psychosocial and he actually made it through to the next round! This is down to the inimitable Michael Monroe, who not only hit his buzzer in time with the music, but decided to start jumping around the stage and fist-pumping along with Jani! You wouldn’t get Will.I.Am doing that on The Voice UK… actually you probably would if he was live-streaming it too.