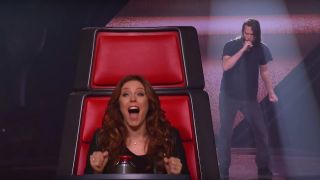 Metal is no stranger to TV competitions. Remember the 82-year-old man who sang Bodies on America’s Got Talent? Or the man who screamed his way through Suicide Silence’s Unanswered on Romania’s Got Talent? Well now it’s time for Canada to get in on the act.

Devout metalhead Louis-Paul Gauvreau comes out an absolutely nails Necrophagist’s Stabwound on The Voice Quebec/La Voix as his (we assume) girlfriend looks on laughing. The judges probably have never heard such a barbaric noise on their tender mainsteam ears, but Isabelle Boulay is loving it. In fact, she loves it so much that she only goes and slams her hand down on the SUPER-TURBO-SWIVEL-CHAIR-BUTTON, granting Gauvreau a chance to perform again in the next round. We’re guessing that’s how it works, anyway.

Also, we should give a special shout-out to The Voice’s in-house band who actually had to learn Necrophagist, rather than just pipe it in over the PA. We’re hoping for some Anaal Nathrakh next time.