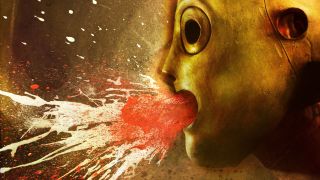 Shawn ‘Clown’ Crahan [percussion]: “We were walking to CBGB’s when the homeless man came up to us. He was just blurting out crap and then he came out with that line. I repeated it over and over in my head so I wouldn’t forget it. Joey [Jordison, former drummer] and I both knew that was a great line.”

Corey Taylor [vocals]: “We recorded Eyeless with all of us in the same room and holding on for dear life. The frenzy that came out of us was amazing. We recorded the songs at, like, twice the speed we’d written them. It was so frenetic and charged with nervous aggression. I threw up so many times. You can hear me retching in the background of this while Ross Robinson [producer] laughs at me. But if anyone was going to capture us at that moment, it was Ross.”

Corey: “The genesis of the song came from Mick [Thomson, guitar] messing around in the practice space. He started playing the now famous crazy line. We were like, ‘That’s cool as shit!’ Joey [Jordison, drummer] grabbed a guitar and started playing the riff underneath it. We jammed it over and over, then Paul [Gray, late bassist and songwriter] came up with the crazy-ass middle bit. We fell in love with it right away because it had the same energy as [Sic] – it was unhinged. We didn’t have a chorus for it for ages, then Joey came to me with the first part of the chorus – he came up with the ‘Fuck it all, fuck this world, fuck everything that you stand for’ which gave me room to do the rest of it.”

Corey: “The first song we wrote as a band was Spit It Out and it was a great moment for us. We’d taken a look at the musical scene and we realised we had such disdain for it that we wanted to raise the bar. There were all these bands using the nu metal name to get away with being, basically, shit. We wanted to take their weapon to use it against them. We wanted to up the ante and make it so crazy and frenetic, so that no-one could keep with us. We surpassed all our expectations with it, too.” Clown: “We were waiting for our original lead singer [Anders Colsefni] to show up for practice but he didn’t arrive. So Corey said, ‘Things are getting a little heavy, so why don’t we just write today’. So we started working on this – and we just knew immediately that it was great. Everyone was fighting really hard to get their part in the song because we all knew how special it was. At one point Joey was screaming at me to play something a certain way, so I had to yell back at him, ‘why don’t you leave me alone and let me write my own part?’ We had an intense working relationship.”

Clown: “Recording [second album] Iowa was like fucking hell. I wanted to kill myself. There was drugs, bitches and rock ‘n’ roll. People expected so much of us then too. People = Shit was a way of saying: ‘Fuck off and leave us alone’.”

Corey: “There was nothing happy about Iowa. All of a sudden we were these metal stars and we weren’t really planning for it. We were expecting to sell a few hundred thousand and just tour. We thought we’d just be one of those genre bands. Then, all of a sudden, everything exploded. I’d had a conversation with Clown about breaking up after the first album as a statement then suddenly the first album went double platinum – we were like, ‘Er, excuse me?’ By the time Iowa came around, we were all pretty gnarly. We’d all got caught up in the lifestyle and the problems that come with that. A darkness set in at the beginning of Iowa that none of us quite recognised. For a good five years, I couldn’t listen back to the album without getting really depressed. People = Shit was a song we wrote on the road when all that was happening, we’d practise it during soundchecks.”

Corey: “This is a very special song to all of us. We were trying to find the right balance of melody and heavy. I wanted to put something together that represented the yin and yang of the human spirit, the light sides and really dark sides or people’s personalities. Sometimes the struggle to balance those two sides really drive you mad. It’s right in that line, ‘I push my fingers into my eyes’. That’s the moment you put your thumb and middle finger against the base of your nose to relieve that pressure. It’s about taking a deep breath and keeping on fighting.”

Clown: “We asked our real fans to be in the video and people came from all over. That meant so much. We weren’t really supposed to destroy everything we destroyed [during the filming in a deserted house] – but we did it anyway. Another plus for that song is that I get to beat the fuck out of my keg. What the fuck else could you want?”

Corey: “I just knew that song was going to be huge. I thought it set so many tones for All Hope Is Gone that I really wanted to go above and beyond, lyrically. When I got the songs that Paul and Joey had been working on, I had notebooks filled with lyrical ideas. I had one sheet of lyrics that I’d been working on when I heard that song, and at the bottom, the chorus for Psychosocial was right there. It was just kismet, it was meant to be. That song has a weird rhythm to it – everything falls where it should, but also where it shouldn’t – then it locks together with that huge chorus.”

Clown: “I had to ask Corey what Psychosocial meant. He wouldn’t tell me.”