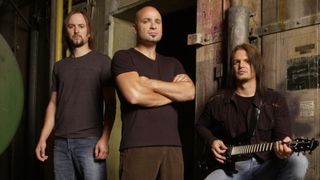 Releasing debut The Sickness in 2000, in the midst of nu-metal catching fire in the mainstream, Disturbed took over US radio stations and UK rock clubs. With his distinctive chin piercing and hard stare, fearless leader David Draiman was a larger-than-life presence who ignored detractors that saw him as a boneheaded assault on metal. Maintaining their popularity by including more hard rock elements and solos in their music, Disturbed went on hiatus in 2011, before returning with sixth album Immortalized last year. Here are their greatest moments.

Rolling along with the steady pace of a military march, and with lyrics referencing God and the end of the world, The Vengeful One contains all the elements of a classic Disturbed single. Released after a four-year hiatus, it saw the band playing safe and playing to their audience.

Written in celebration of their fans, and describing the sea of raised fists the band see when they look into the crowd, the title track of their third album is a straight-up PMA paean to the power of unity through metal. It’s not clever, but it is big.

It does what it says in the name. Opening with a creepy, bell-tolling intro followed by stabbing rhythms, you expect the song to build to an energetic crescendo. Instead, the chorus is all about David’s crooning voice and mournful keys. In the bridge, two vocal tracks overlap, creating an eerie sensation of reverberation.

An anthem to chasing the dragon. Romancing the stone. Getting blazed. David Draiman started smoking weed in high school, and reluctantly gave it up while him and his wife were trying for a baby. This song, with its stupidly catchy distorted guitars and plain stupid subject matter, extolls the virtues of rolling a fat one and kicking back.

One to play on a shit Monday morning or before a session at the gym, Warrior is Disturbed’s ultimate fighting anthem. Laden with the kind of go-get-’em lyrics that bands like Five Finger Death Punch usually trade on, it features David’s rapid-fire delivery, a whispered bridge, and some well-placed double kick.

Disturbed’s cover of Simon & Garfunkel’s The Sound Of Silence might be getting all the attention right now, but it’s their take on Genesis’ Land Of Confusion that best shows their personality. The 80s pop hit gets a bouncy nu-metal update, punctuated neatly by David’s distinctive monkey noises.

A slick, industrial-tinged song, Inside The Fire is about David standing over the body of an ex-girlfriend who took her own life, while the Devil urges him to kill himself. His delivery remains powerfully clipped, while the guitar solo spirals into despair. It’s a shame the video’s schlocky effects cheapen the subject matter and irresponsibly glamorise suicide.

Going deeper than their debut, Believe delved into David’s Jewish heritage, the death of his grandfather and his thoughts on 9⁄11. Lead-off single Prayer was more thoughtful than previous songs, with a massive breakout chorus made for holding arms aloft. Onstage, he became more of a messianic presence, calling the audience, “My brothers, my sisters, my blood”.

Unhinged and full of moshpit-filling melody, Voices was the sound of Disturbed in the first flush of their career. Released right before Down With The Sickness, it showcased David’s pacey, madman delivery and the band’s way with a meaty riff and a sharp hook. A satisfying nu-metal mutation.

The tribal drums. The animal noises. The satisfyingly aggressive chorus. Just when you think David’s worked himself into enough of a frenzy, out comes the expletive-laden monologue about child abuse that he’s described as really being “about the conflict between the mother culture of society, who’s beating down the child yearning for independence”. Either way, it’s still guaranteed to fill dancefloors.