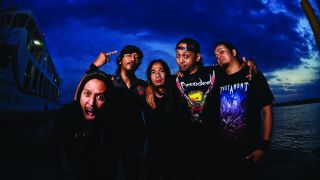 If you’ve ever wondered why Metal Hammer keeps banging on about the Indonesian metal scene, you may find the following list quite informative. The truth is that Indonesia has shitloads of great metal bands, all spawned by a gloriously united and passionate scene that sprung from the very humbles of DIY origins and is now poised to start making an impact on the international stage. Check these bands out and then prepare to dive into one of the most vibrant metal communities on the planet. Anjing edan!

Indonesia’s metal scene boasts countless different sounds and styles, but few of its band sound quite as ready to conquer the rest of the world as Down For Life. Hailing from Solo, Central Java, they are clearly students of US thrash and groove metal, but they use those inspirations to create something that has its own strident personality. Latest album Himne Perang Akhir Pekan is a brutish epic with countless electrifying moments.

The strength of Indonesia’s extreme metal and hardcore scenes is now well documented, but there are a great number of top-notch stoner rock and doom bands knocking about over there too. Seringai are the pick of the bunch, not just because their name means “grin” but also because 2012’s Taring album rocks like an absolute bastard. Smoke ‘em if you got ‘em.

Stalwarts of the Indonesian death metal underground, Siksakubur have clocked up two decades of active service and have become one of their scene’s most respected bands in the process. Masters of epic, technical death metal that packs a fearsome, hellish punch, they are long overdue some international recognition, not least for their raging 2014 self-titled record. Play it loud.

These former Golden God nominees caught our eye with their third album Negeri Naraka in 2013: fast, furious and loaded with Sepultura-style low-end rattle, the Bandung five-piece incorporate thrash, death metal and hardcore with rare skill, but their strongest suit is the sheer ferocity and conviction that underpins their barbarous assaults. Fun for all the heavy metal family.

Wherever a death metal scene exists, a grindcore offshoot lurks nearby. Noxa are arguably Indonesia’s most admired purveyors of flat-out grind and come replete with socio-political and humanitarian lyrics that would make Napalm Death glow with pride. This is the real grinding deal, ladies and gentlemen, but with plenty of that uniquely Indonesian passion and power.

Veterans of their homegrown scene, Forgotten are a great example of the unique perspective that bands from Indonesia bring to familiar metal subgenres like death metal and metalcore. Highly distinctive and imaginative but still more than vicious enough to sate Western tastes, the confrontational Bandung quintet’s third album Laras Perlaya is simply one of the strongest records yet produced by the Indonesian scene.

Active since 1997, Beside are one of Indonesia’s most prominent metal crews, and one of the bands that seem most likely to connect with the international metal mainstream. Listen to last year’s ferocious Eleven Heroes album and you’ll hear the sound of a band with great technical skills, songwriting chops and an abundance of infectious energy: balls-out metalcore played by men that really fucking mean it.

In terms of intensity, few Indonesian bands come close to the explosive, chaotic attack dealt out by Bandung’s Gugat. Dual vocalists Achie and Dicky bring plenty of punk rock fury to the band’s thrash-driven hardcore, but the songs on their 2013 EP Family Values are as precise and devastating as anything from the Western world. Sick Of It All meets Death Angel in a whirlwind of razor-riffs and skull-rattling kicks. Killer, basically.

One of Indonesia’s unofficial Big Four, alongside Burgerkill, Forgotten and Beside, these Bandung death metal diehards have been plugging away in various incarnations since 1990 and have been instrumental in the flourishing of Indonesia’s now vast metal scene. Purveyors of extreme brutality, they went down a storm at both Bloodstock and Obscene Extreme and are bona fide underground legends far beyond their native country.

With a sound that draws from groove metal, metallic hardcore and various strains of underground brutality, Burgerkill have honed their strong identity and huge popularity over two gruelling decades. Indonesia’s biggest metal band by some distance, they won a Golden God in 2013 and hit Europe for the first time in 2015 with performances at Bloodstock and Wacken. They must surely be on course to build on their achievements when they release their long-awaited follow-up to 2011’s magnificent Venomous. Bring it on, chaps.

10 of the best metal bands from Canada

10 of the best metal bands from Norway