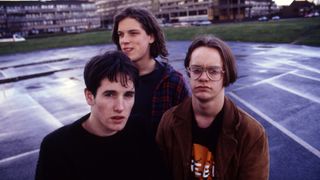 School’s out for the summer of 1993. And for 16-year-old Tim Wheeler, that means two months of sci-fi films, sexual frustration and underage drinking, set against the backdrop of a Northern Ireland torn apart by IRA violence. All are factors that will inform the best song he’s ever written, an impossibly catchy pop-punk sugar-rush about a whirlwind intergalactic romance.

“The girls in Northern Ireland weren’t happening for me,” says Ash frontman Tim Wheeler, “but you can really romanticise someone from outer space, put them on a pedestal. I was into shit like Star Wars and Battlestar Galactica, and as a kid I’d dream that my parents were Princess Leia and Luke Skywalker. That’s why I loved David Bowie and the Pixies’ Trompe Le Monde album, because they had all these sci-fi references. Maybe it’s to do with growing up in such an isolated place. [Downpatrick] is 20 miles from Belfast and a bit of a rough town. The troubles were still going on in 1993 and it was still an edgy kind of place.”

As Wheeler drafted the escapist lyrics for Girl From Mars, he wasn’t picturing tentacles and antennae.

“In my mind, the girl definitely wasn’t green, she looked normal,” he recalls. “The people in Star Wars were just glamorous humans. To me it was more of a metaphor. The main thing behind it – and where the sense of yearning in the song comes from – was that I’d broken up with my first girlfriend. I’d fallen hard-core in love, it had fizzled out that summer, and I was still mourning that. At 16 I started getting depressed. I was a lovesick teenager.”

As for the chorus, in which Wheeler imagined that ‘We’d stay up late playing cards/Henri Winterman cigars’ – the songwriter drew inspiration from a family holiday in France.

“I had made friends with some English kids and we’d smoke cigars and drink beer all night on the beach,” he remembers. “I wasn’t trying to capture that spirit of coming of age, but it’s just in there because that’s exactly what was happening to me.”

All that remained was to chase down the punky chord sequence and add a prodigious guitar solo.

“Some of the melodies were a bit Teenage Fanclub-ish,’ considers Wheeler. “We were very much doing the pop-punk thing, but the solo was a remnant of my early days of being in really bad metal bands. The first rock band I got into was Thin Lizzy, and I’d been trying to copy Brian Robertson since I was 10, so I played this fast wah-wah lead. We’d write pop tunes, but we’d always try to get metal solos in there.”

Ash were gigging a loose version of Girl From Mars around Belfast that same year, at which point it was considered “just another song in our set”, despite the praise Wheeler received from other bands on the circuit. But for now its recording would be delayed by one frustrating fact: Wheeler, bassist Mark Hamilton and drummer Rick McMurray had A-levels to sit.

“We had this double life,” the singer recalls, “where we’d be normal schoolkids and then we’d play gigs in the back room of pubs. We got signed when we were 17. And our manager knew Girl From Mars was really good so he told us to hold back on it, because we hadn’t been able to promote our [1994] Trailer mini-album as we were still at school. It was Easter 1995 when we went to Rockfield [studio] with Owen Morris, who was producing Oasis and The Verve at the time.”

Despite their tender years, Ash would be held to Gallagher standards of hellraising. “That was mad,” Wheeler remembers. “Owen was a complete maniac, introducing us to drugs for the first time. He’d get us playing in drag; just get us off our heads. Any idea he had we’d be up for it, because we were young, up-for-it kids. And he got a great sound out of it.”

An even greater sound was the finished Girl From Mars pumping out of Wheeler’s stereo. “It started getting played on the radio when I was doing my A-levels,” he recalls. “And what made it even harder to concentrate was that we’d signed with Warner Brothers in the States, and they’d given me their CD catalogue to choose from. I did my last exam, and two days later we played Glastonbury, and two weeks after that Girl From Mars went into the chart at number 11. Then my life got turned on its head and everything went completely ballistic. I guess it was just great timing. All the Britpop stuff was happening and guitar music was in the charts. When I wrote it, it wouldn’t have been a hit.”

Perhaps not, but over the summer of 1995 Girl From Mars was everywhere. “There was even a time when it was switchboard hold music for NASA,” Wheeler says, grinning.

“It was a mixture of excitement – all our dreams coming true – and also the insanity of the way we were partying, and the pressure that gets put on you when everyone wants a piece of you. It was confusing because I was thinking: ‘I should really enjoy this,’ but also ‘This is hard to deal with.’ We were drinking and partying, not looking after ourselves. It all caught up with us a couple of years later, when we had to write our second album, and we were completely burnt out.”

Spin forward to 2016. While Ash are veterans of the indie scene, their seven albums and countless singles enabling them to sell out venues across Britain. Yet there remains one constant. “I’ve never, ever had a moment – like, say, Radiohead with Creep – where I didn’t want to play Girl From Mars,” says Wheeler. “People still love it, and I think they’d be disappointed if we didn’t play it. You just know people are gonna throw their beer in the air. I’ll start the song and you’ll see the pints go flying.”

Ash will be on tour throughout November and December.