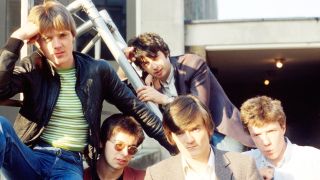 It may be one of the most cherished recordings ever, but the story behind the release of The Undertones’ Teenage Kicks in 1978 is long on happy accidents. Derry’s only punk band didn’t originally plan it to be the lead track on their debut EP (a record that itself was intended solely as an epitaph) and they even had to persuade their singer to rejoin the band just to do the recording. But when DJ John Peel got to hear it, everything went a bit mad. Not that it turned the heads of our heroes. Famously ambivalent to rock-star behaviour and the trappings of fashion – “You wore what your ma bought you back then” – they would be together for a brief but fertile four-album, five-year career.

They weren’t always popular. If you inspect the back cover of Teenage Kicks you’ll find a photo of some arcane Derry graffiti: ‘Undertones – shit, pish, counts, wankers’.

“At the time, punk wasn’t that well known in Derry,” reflects guitarist John O’Neill. “We had a core following of 50 people or so, but apart from that we were treated with a lot of suspicion.”

No one owned up to writing the graffiti either: “I think it’s because they can’t spell ‘cunts’ right,” says bassist Michael Bradley. “Who would own up to that?”

By 1978, after trying to make headway on the local circuit, which pretty much amounted to show band central The Casbah, The Undertones were ready to give up.

“We had been playing for maybe a year,” John says. “And at that age a year is like a lifetime. We had got to the stage where we were just banging our heads against a brick wall. We thought, ‘Well, at least we’ll put a record out to prove there was a punk band that existed in Derry at the time.’”

First, however, they’d have to persuade their singer, Feargal Sharkey, to rejoin. No one seems to remember how the split came about, but Bradley was tasked with resolving it.

“I remember phoning Feargal from the O’Neills’ house, which was the centre of operations,” he says. “I remember saying: ‘Listen, just make the record.‘”

John, the song’s author, says his inspiration was partly the MC5’s Teenage Lust, and, naturally, the Ramones.

“We were huge Ramones fans. You can always hear that in the tunes, and some of the words too.”

But he’s never considered Teenage Kicks to be the best Undertones song – or even the best one on that record.

“I still don’t,” he says. “If you look at all the different cover versions of the song, they’ve never been that great. It’s a great record. I can see why John Peel loved the record. You can hear the energy, and the whole sound of it is fantastic. But if you break the song down, it’s not really that original lyrically or musically. But I thank God every day that I wrote it.”

“What I do remember about Teenage Kicks is Billy’s drum beat at the start,” says Bradley. “I’m nearly sure he borrowed that from somewhere else, another cover we were doing. The Shangri-Las and the Brill Building stuff, I definitely remember that influence as well – that was what we were thinking at the time in terms of what was a good song.”

John O’Neill attributes the spark of the performance to playing Belfast on a combined Good Vibrations bill on the evening prior to the recording.

“I remember thinking that night. I’m not sure how good we are, but we’re at least as good or better than the other Belfast bands. That made us confident going in to record the next day. We called it the Teenage Kicks EP because obviously we were teenagers, and it just had a good ring to it – the True Confessions EP wouldn’t have been as good. But even when we played the song live then, I don’t think it stood out more than any other song. We obviously thought it was one of our best, ‘cos we put it on the EP. But we thought True Confessions was the best song on the record.”

They were all gathered round the radio at O’Neill HQ – “like a youth club,” says O’Neill, “with me, Billy and Feargal always there, like having three extra brothers” – to hear John Peel play it for the first time. In fact he played it twice. Sire Records mogul Seymour Stein was listening too, and he flipped. The Undertones left Good Vibrations with no ill feelings.

“At the time, Terri would have been perfectly within his rights to say: ‘Listen, I own the copyright to Teenage Kicks, so any deal you do with Sire, I should have a percentage of that’,” Bradley says. “He would have been 100 per cent entitled. And he didn’t. ‘Away you go. Good luck to you!’”

A delegation went to London to negotiate the band’s new contract. Sharkey and Bradley were the chosen envoys, although Bradley isn’t sure why: “I was the smartest – in terms of O-Levels.” Feargal was “the most hard-headed”.

“Maybe I was sent to keep an eye on Feargal. I always make comparisons with 1920 and [Irish politician] Michael Collins, when they went over to London to negotiate. Because John, Damian and Billy were back home. They had the veto.”

When Bradley did call home, emboldened by their distance from the front lines, the remaining trio insisted he ask for more than the £8,000 on the table. £60,000 sounded a nicer figure.

“I had to cup my hand over the phone and say to Seymour: ‘We’d like more money. As much as the Rich Kids got.’”

“I think he did give us more money, but he was probably going from a very low base anyway,” says Bradley.

Within a month the Teenage Kicks EP had been reissued by Sire, home of their beloved Ramones and Talking Heads. The song has since become a staple of every punk compilation, and was recently used as the title of an Ade Edmondson sitcom. Does its over-exposure exasperate Bradley?

“I don’t really mind. I can’t mind!” he reasons. “It’s done so well for us, it’s wrong to complain. Not when we play it live and see so many people smiling and loving it.”