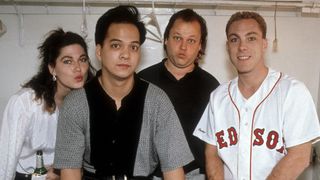 There are few more startling examples of avant-garde cinema than Un Chien Andalou (it translates literally as ‘an Andalusian dog’), the surrealist fancy dreamed up by artist Salvador Dali and director Luis Buñuel un 1929. There’s no discernible plot and no one utters a word. A woman prods at a severed hand, a man drags two grand pianos stuffed with the rotting remains of donkeys, another cycles down a quiet street dressed as a nun, ants emerge from a hole in someone’s palm. It’s infamous for one scene in particular, in which Buñuel’s character is seen gazing at the moon before taking a razor and slicing the left eyeball of his dear wife, who sits implacably on a chair.

In the early 80s, it caught the imagination of a young anthropology student in Massachusetts called Charles Thompson. Later, as Black Francis, his noisy surf-punk four-piece the Pixies worked the idea into Debaser, the opening song from the band’s second album, 1989’s Doolittle. Not that the rest of the Pixies necessarily knew that.

“I’ve no idea what he was singing about,” admits lead guitarist Joey Santiago. “And I didn’t want to know either. It was the same throughout Doolittle. I’d catch a word here and there, but it was almost like I was intruding on his privacy. If I’d asked him what it was all about he’d probably tell me to just shut up and play something.”

Francis, these days trading as Frank Black, took a similarly Buñuel-like approach to the lyrics. “I’d say I probably wrote the lyrics in 10 minutes,” he offers. “And I stand by those lyrics. I’d seen that movie a few times. To me the song is my version of study clip-notes for Un Chien Andalou. It’s all real fast, a case of: ‘Let’s quickly show you what’s going on here – boom-boom-boom.’”

But was he out to say anything pressing in particular? “I guess the only thing I put in the lyric that could be considered an original concept was that I just echoed the sentiment of the filmmakers. Which was: ‘Hey, we’re just doing what we wanna do. It doesn’t make sense and it might be shocking, but to me it’s normal. I am debasing the norm, I am breaking down the societal norm and cutting it up to come up with something surreal and jarring.’ That was the sentiment of the people who were making those films: I am a debaser. Know what I mean? It’s almost an Americanism to change a word that way.” The simple, side-swiping chorus is one of the most treasured of the Pixies’ career. Francis accentuates the ‘chien’, before things subside with: ‘Wanna grow up to be/Be a debaser.’ Deal’s faint backing vocal acts as a nervy echo of Francis’s. Some accounts even claim that, in the first version of Debaser, ‘un chien Andalusia’ was actually ‘Shed, Appolonia!’, an oblique reference to the Amazonian co-star of the 1984 Prince flick Purple Rain. It was all part of the lyrical weirdness that characterised Doolittle itself.

“In psychotherapy sessions, the patient will just blab on about all kinds of stuff,” says Francis, “then it’s left to the therapist to extract the important things. And that’s the Pixies. I don’t really know what I’m talking about, I’m just doing it. There’s no art to it in terms of the meaning of it all. It’s all very slippy-slidey and more surrealist.”

With the lyrics, Francis’s chief interest seemed to lie in the construction and impact of the words themselves. As for the music, Debaser, according to drummer David Lovering, “just kinda clicked. It was a pretty easy song to play for all of us. I don’t think it took that long to do at all.”

Francis and producer Gil Norton were intent on making the structure of the song as unpredictable and abrasive as the lyrics.

“There are three chunks of music in it,” Francis says. “There’s a chorus, verse and pre-chorus. And when you have three chunks of music like that, you don’t necessarily have to put them in a straight order. It’s not just A-B-C, it can be A-C-B-B, whatever. You move things around and work on the transitions. We wanted the most exciting rock’n’roll arrangement.”

Santiago’s frenzied riffage, at full tilt as the song hurtles to its climax, took some working out, but the result is extraordinary.

“I remember having quite a tough time filling those bars at the end,” he recalls. “That was the only part that stressed me out. But when it was done, Gil said: ‘Wow!’”

Listen closely and you can hear Francis’s guitar underneath, chopping away at a rhythm that sounds like a speeded-up precursor to Nirvana’s Smells Like Teen Spirit. Kurt Cobain later acknowledged the debt he owed the Pixies.

Debaser wasn’t released as a single from Doolittle – the band opted instead for Here Comes Your Man and Monkey Gone To Heaven – but it remains one of the most incendiary opening shots of any album before or since. It was finally issued as a seven-inch nearly a decade later, as a taster for the 1997 ‘best of’ Death To The Pixies. It’s a song that continues to inspire debate, not least for Francis’s brand of bastardised Spanish.

“I’d spent six months down in San Juan, Puerto Rico, so I had a lot of Spanish,” he explains. “It wasn’t even good Spanish. But I got a lot of credit for putting it into songs like Debaser. I guess people thought of it as weird or ballsy that we had these songs with bad Spanish in them. People were always trying to make a big point out of all of these things, but I felt like: ‘C’mon. Ever heard of Los Lobos?’”