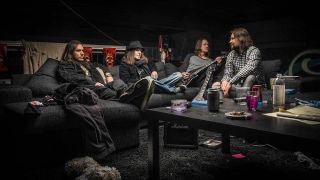 “People were kind of looking for something new,” remembers Children Of Bodom guitarist and singer Alexi Laiho. “They were so used to bands trying to copy Dimmu Borgir or copy In Flames or whatever, and all of a sudden there was Children Of Bodom. And let’s face it, it is a little different. And people dug it.”

The breaking of Children Of Bodom is a curious anomaly in the course of heavy metal history in the 21st century. The pattern of the age has included a fair share of trends: the Massachusetts metalcore sound, the thrash revival, the “epic” thing that peaked with The Blackening, the endless slew of bands trying to sound like Isis or Neurosis and ending up sounding like a poor man’s Cult Of Luna, and so forth. And standing out in the seismic shift of the landscape in the year following nu metal’s collapse is a record that doesn’t fit into a movement, a record that turned a little band from Finland into metal superstars: Hate Crew Deathroll.

In 2003, extreme metal was kicking its way back into the wider metal consciousness again. Decapitated’s Nihility the year before was attracting a group of metalheads too young to have seen Death live. Immortal had revitalised the Norwegian black metal sound with the thoroughly modern yet utterly uncompromising Sons Of Northern Darkness, Dimmu Borgir were about to go from being a big fucking deal to putting black metal on Hollywood’s radar through Death Cult Armageddon (and without needing to stab anyone in the process), and the likes of Blut Aus Nord, Deathspell Omega, Drudkh and Watain were at the forefront of a creative resurgence in the underground. Meanwhile the Boston metalcore bands had reminded the world that At The Gates had been brilliant – and that metal could have melody and extremity, yet be accessible. The groundwork was laid and the mood was ideal for a band that were vicious and snarling, but still catchy as hell. Of course, the band had to be good enough, but thankfully, Children Of Bodom had come into their own at exactly the right time.

“It was definitely the first album where we established our own style,” says Alexi. “We had found our own thing, what we are all about. But there were other factors involved too. It was promoted differently, promoted more in certain countries, so that effects a lot too.”

“And for us, being a small punk band from Finland, that was the first album we got to tour North America with, so that’s huge,” adds keyboard player Janne Wirman. “I would think that even affects you if you’re a fan in Europe. ‘Oh, they’re touring the US now?’ It becomes a huge thing. I think we really found our style on that album. Then things started happening. That was still at the time when albums were selling, and record companies were really pushing things. It just happened at the right time, that we found our style.”

The changes in style that came in with the band’s fourth record – most prominently, the dropping of the little metallic versions of classical compositions that littered their early work – were not intentional. More, it was simply that the songs they were writing did not feature those sections – and on liking the new songs, the band felt no need to crowbar in Beethoven artificially.

“None of us thought we needed to find our style,” remembers Janne. “It just happened. We started writing new music, all of a sudden the classical bits were gone, and we thought, ‘Wow! We really like this.’”

The band were perhaps fortunate that this coalescing of their musical identity not only resulted in catchier, more memorable songs, but coincided with them having sufficient experience to convey their ideas as intended. This was not something that had been a smooth ride in the past.

“I was never very excited about the first album,” Janne says. “There’s a couple of things like not playing to a click-track, and then leaving a 14 bar break and then needing to play 14 bars of keyboards with no idea when the drummer is going to start next. I was like, ‘Fuck my ass!’”

Experience may be the cruellest teacher, but it appears to have been a valuable one. The first two albums had been recorded with Anssi Kippo, himself a very young producer, and almost as inexperienced as the musicians he was recording. Add in the absence of digital recording technology at that point (delightfully bonkers debut Something Wild came out in 1997) meant the band were using tape for the early recordings – something which, along with their cock-ups of the past (not using a click-track, for instance) served them in good stead for Hate Crew Deathroll.

“It was very fucking important,” says Janne. “I thought about this later on. Having had to play all those technical bits on tape for the first albums… if I was a kid that age now, with the hard drive technology existing now, I would be way less of a musician. Because you don’t need to bother practising that much. That’s something I only realised a couple of years ago, when I was recording something; if we hadn’t had to play that on tape for the first three albums, we wouldn’t be as good musicians as we (kind of, think) we are now.”

The band returned to work with Kippo for Hate Crew Deathroll having worked with Peter Tägtgren in Sweden on previous album Follow The Reaper – and found he too had learned from experience.

“By that time he had built a really nice studio building,” remembers Janne. “He had a really professional gig going on. He was excited having us back there, and he really wanted to show how much he had learned in the music business since then [the second album]. Everybody was really cheerful, everybody was, like, ‘we really want to show what we can do.’”

“Everybody really wanted to go out of their way to do better,” Alexi sums it up. “And we did. That was a lot of fun too.”

The album was – and remains – the band’s best. Crunch and crush and breakneck pace mixed with memorable choruses and big gang chants – complete with lashings of keyboard and guitar shredding. Lead single Needled 24⁄7 (complete with a brilliantly terrible video) entered and remained in the knowledge of a far wider metal audience than a band this aggressive would normally expect in the years before Lamb Of God became huge. Success quickly, deservedly followed. A tour of the US opening for Dimmu Borgir opened a number of doors, and the Children Of Bodom had firmly arrived – not that they necessarily realised it at the time.

“It was definitely mind-blowing,” remembers Alexi. “But then again, things happened so fast – and I don’t mean overnight success, because that’s not the case, but when things started to happen, everything just went so fast that we didn’t really have time to sit down and look at the situation, what was going on around us.”

It helped, of course, that this was right at the end of the era of records being able to sell in the large numbers of the pre-downloading era. More, the dilution of attention that came with fans being able to access any and every niche that tickled their fancy was yet to come about. It may well be that the splashes like those Bodom made with Hate Crew may never happen again, with the metal pool that much bigger and the ripples reaching less far and with less impact. But even if they do, it seems unlikely that there will be one quite as unexpected as the band from Espoo that liked to sample Bach and Mozart.

The 10 best Children Of Bodom songs, by Alexi Laiho

Children Of Bodom’s latest album I Worship Chaos is out now, via Nuclear Blast.