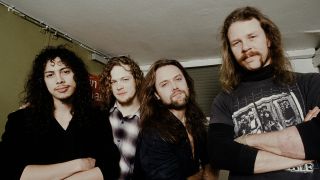 With over 20 million copies sold worldwide, Metallica’s eponymous fifth album, better known as the ‘Black’ album, is one of the biggest-selling metal albums ever. Famously, the San Francisco quartet had sold one million records with 1986’s Master Of Puppets without releasing a single or ever making a promotional video, but five years on, their stated aim was to take over the mainstream, or as their drummer Lars Ulrich would memorably state, to “cram Metallica down everybody’s fucking throat all over the fucking world.” With Metallica, they accomplished just that, but not every song on the album had the same impact…

Metallica albums generally end with a bang, not a whimper, with Damage Inc. and Dyer’s Eve in particular emerging as fan favourites, but despite its dramatic intro (and a more-than-decent gang chorus) The Struggle Within never reaches such heady heights. That Metallica didn’t play the song live until their hand was forced by their decision to play the Black Album in full in 2012 speaks to its place in the album’s pecking order.

It’s almost offensive to list a song this good at the tail end of the album ranking, but on a collection very obviously front-loaded with big hitters, this brooding, mid-tempo bruiser is one of the shorter straws. From Jason Newsted’s neat, hooky bass line, through Hetfield’s catchy, harmonised riffs to its widescreen chorus, this is a hell of a tune mind, but again, its creators didn’t consider it worthy of inclusion in a set-list until 2012, which tells its own story.

Everything about Through The Never – the serrated riff, the shifting time signatures, the dynamic surges and pauses – suggest that it could have fitted snugly on to …And Justice For All alongside Eye Of The Beholder and The Shortest Straw. A ridiculously fine song by anyone else’s standards, on an album of such towering quality it’s rather harshly relegated here to also-ran status.

There will undoubtedly be people – and let’s be honest by ‘people’ here we mean ‘American metal fans’ - who consider the bullish, chest-puffing Don’t Tread On Me as one of the highlights of the Black Album, but its overtly macho, ‘Fuck yeah ‘Murica!’ grandstanding sits rather uneasily for those who’d previously considered Metallica – not least on the evidence offered by the lyric sheet from …And Justice For All – a rather more liberal-minded collective. Meathead lyrics aside, the West Side Story steal makes for a cool intro, but even James Hetfield conceded that the song is “probably not one of my favourite songs musically.”

Given Bob Rock’s finely-tuned commercial instincts, it seems bizarre that the producer initially thought that Holier Than Thou should be the album’s first single, but perhaps Rock heard the thrashy intro, gang vocals and punchy chorus as the perfect bridge from …And Justice For All to Metallica’s more ‘mainstream’ future. That ultimately it wasn’t selected among the five singles cherry-picked from the album says everything about its standing as a solid album track, but nothing more.

‘Off through the new day’s mist I run. Out from the new day’s mist I have come.’ What a fabulously vivid opening couplet. If one is forced, as we are here, to look for flaws in what is another storming track, perhaps the chorus never elevates the song as it might, but a powerful groove and evocative imagery make Of Wolf And Man a long-standing fan favourite.

6. The God That Failed

James Hetfield had addressed his repressed Christian Scientist upbringing previously (most powerfully on Dyer’s Eve on …AJFA) but never with quite the same contempt and scorn as he employs here. Hetfield is on record as describing The God That Failed as “slow, heavy and ugly” and it’s the controlled, brutish power Metallica exhibit here that makes this such a striking, memorable contribution to the album.

Upon hearing Nothing Else Matters for the first time, Kirk Hammett’s initial reaction was ‘James wrote a fucking love song to his girlfriend? That’s just weird.’ A sizeable proportion of Metallica fans felt the same way. In truth, James Hetfield wasn’t at all convinced that his first ever conventional love song should be recorded for Metallica, but both Lars Ulrich and Bob Rock lobbied for its inclusion on the album. Undeniably affecting, this open-hearted, tender ballad is arguably Metallica’s most commercial song ever, meaning those who consider themselves ‘hardcore’ Metallica fans profess to hate it, even while singing along with moist eyes every single time it’s aired live. The band have written better ballads, but only a try-hard idiot would dismiss this perfectly-formed composition as among the Black Album’s highlights.

4. Wherever I May Roam

When producer Bob Rock spoke of the Black Album establishing Metallica as the Led Zeppelin of their generation this was undoubtedly one of the tracks he had in mind. Musicians singing about ‘The Road’ is a terribly hackneyed trope, but few such compositions carry the same dignity, nobility and gravitas with which James Hetfield imbues this muscular anthem. If your pulse doesn’t quicken in time with the accelerating rhythm at the point Hetfield sings “Rover, wanderer, nomad, vagabond” you might be clinically dead already.

The song that battered down the doors to the mainstream for Metallica. Lars Ulrich might attract ridiculous levels of hate from even those who consider Metallica ‘family’, but it was his skill in identifying and re-arranging Kirk Hammett’s intro riff which sets Enter Sandman rolling in such spectacular, impactful fashion and precious few rock songs shift the air with such force and conviction. An all-time metal classic.

If we’re honest, this might only be getting the nod above Enter Sandman because the album’s first single is such a familiar cornerstone of the modern metal landscape, but the sheer might of this down-tuned behemoth is undeniable. Bob Rock’s describes the track’s crushing riff as “this force that you just couldn’t stop”, and it’s here more than perhaps any other track that Metallica stamped their authority as metal’s new global kings.

From the moment that Cliff Burton joined Metallica, the San Francisco band began taking giant creative strides away from their peers, and The Unforgiven stands as another seismic leap forward. Laden with atmosphere and drama, it’s a brooding meditation upon life, love and liberty worthy of long-time influence Ennio Morricone, a beautifully orchestrated, perfectly-paced metallic symphony which dips and soars majestically with not a single note wasted. A true masterpiece.