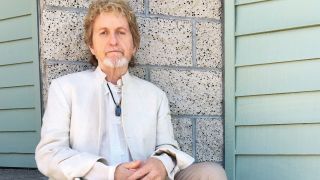 “With The Flower Kings,” says Jon Anderson, “the last thing I heard from them seemed to stem from King Crimson and Yes, but then spread its musical wings outwards, bound for other paths of expression. It was wonderful. I got the feeling I first got from Vanilla Fudge, where they expanded and extended music ’til they changed it and it evolved into something else. Going to work with Roine, I found that feeling came back.”

Invention Of Knowledge sees two emperors of different eras of prog come together to bounce ideas off each other and spring towards entirely original terrain. Jon Anderson and Roine Stolt first collaborated in 2014 in the live context of the Progressive Nation At Sea cruise. After Anderson had agreed to play a 20-minute set with Transatlantic – Stolt’s other baby – he emailed a suggestion that they should also play The Revealing Science Of God, side one of Tales From Topographic Oceans, together. Surely that was quite a stretch for Stolt and the band to learn in a hurry?

“I know – bit of a stretch for me too, to perform!” laughs Anderson. “It was midnight! It was so much fun rehearsing it, then by the time we’d done our own shows, we whispered, ‘Do you think we can really do this now?’ But we were committed. It was exhausting. It’s not an easy work. Like climbing a mountain! But I went through so many ups and downs with Tales… – through a lot of pain and frustration – so all these years later, to perform it with Roine was heaven, was magical. Musically, it still works. We did something in the 70s that still works, 40 years later. And that music taught me never to worry whether something’s a hit – people will find it if they find it.”

So how did the Invention Of Knowledge album come about?

“How did I come to create music with somebody I’d met once – on a cruise? Well, the record company guy [InsideOut’s Thomas Waber] is a big Yes fan. He suggested that we two could record something together, something which could be really important. ‘Okay, let’s try,’ I said. I sent Roine some ideas and lo and behold! He liked what he heard and I liked what he did with it, reorganising, colouring. It had a number of different moods, with a prog rock feel just here and there. Roine has so much taste. It rang true to everything I hold most dear to me.”

“Sure, I still make that every day in my heart and soul, 50 years after I first started on it with Chris [Squire]. Nothing’s changed from then in the sense that I’m always looking for musical adventures. But of course things have changed in other ways. Maybe Roine and I didn’t have to be in the same room all the time because of new technology and emails, but we’re still on the same planet!

“He went on tour with Steve Hackett, and I’ve been touring with AndersonPonty Band, but after that balanced out, we reconvened a couple of years on and reconnected. And got on with it. We both understood from the beginning that this was a journey into long-form music. It’s time for this kind of music again. You can relax into it and really listen.

“The fun thing was we did much of it in sections, looking at each piece very, very clearly. I’d say, ‘This is great, but edit this, or stretch that.’ And I’d sing over his music, I’d relate to it. Just like I did in Yes – I was very much the musical director, overseeing the long‑form structures. Because when things started with Chris and the guys I was listening to ‘popular classics’ – I was never really a raging rock and roller. I studied Sibelius, Stravinsky, Dvorak. I wanted symphonies!”

And that’s what we have here…

“Now I’d dabbled in long‑form music again with Open, two or three years ago, a 20-minute piece. And I realised that’s a part of my life I should continue with: I should exercise that energy, that DNA of mine!

“So Roine is a beautiful guitar player and arranger, and I was concentrating on the structure. When it was almost finished, I hadn’t listened to it all the way through – I’d listened to all the sections repeatedly, zoning in to make sure each area was really working; lyrically too. We were both zoning in, making it connect, to-ing and fro-ing. And then around January or February this year we had the whole thing on a CD. So I went for a drive in my car, putting it on, hearing it all the way through in sequence.

“And it works! I feel we were guided by this musical energy. There was a feeling of well‑being about it. I didn’t want to come back; I didn’t want to get out of the car! I was hearing things within it that I’d never heard before. There are always things you miss first time around; there are always different perceptions. This music elevates you.”

What themes are the lyrics exploring on the album?

“The positive side of life is always growing… though the other side of the coin is some say it’ll destroy your soul if you overextend: that’s to keep the people down. Let them be free and positive! They try to keep people hypnotised by advertising by the time they’re 25, so they don’t grow into well-rounded humans.

“I sing about: we are truth, we are heaven, we are. And about the destruction that is religious confusion. We are all one on the planet, of one being. You can compare that to Close To The Edge or Awaken. Every big project I’ve done has had similar themes.

“Know that you will be understood, you will be loved. It’s a natural thing. To put this into lyrics without being preachy is a delicate thing. You have to be warm and open.”

Invention Of Knowledge is out now on InsideOut. See their Facebook page for more information.