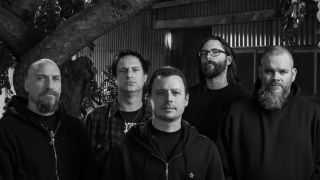 The brain-melting world of post-metal can seem a little daunting at first. The name alone conjures up imagery of a world far beyond metal – how could that be?

With soaring, tsunami sized soundscapes that warp every notion of heaviness and metal into something more beautiful, its a genre that, once you get to grips with it, is infinitely satisfying.

But if you still have no idea what we’re on about, here’s what you need to know…

Droning, sparse guitars hammering the same riff for minute after minute. Justin Broadrick’s scraped raw vocals fed through knackered amps and layered over precise, lifeless programmed drums. Streetcleaner, Godflesh’s first full-length may precede the post-metal movement, but there is no doubt that the sonic nihilism of their aesthetic played a huge part in the formative years of the genre.

Despite forming as a punk act in the mid-eighties, by the start of the next decade Neurosis were showing indisputable signs of the shifting, boundary-pushing band they would become. The release of 1992’s Souls At Zero marked a distinct change in tact for Neurosis as they pushed towards a sound riddled with a variety of influences.

And then there was Enemy Of The Sun, released a year later, which would lay down the blueprint for practically every post band to follow. Within the dense, hypnotic murk of opener Lost, a monster was born.

Isis – The Beginning And The End

If Neurosis spawned the beast, then Isis moulded it into the monolith that it would become. Oceanic was the band’s second album, and inflated the work on their debut Celestial into a vast, considered concept album that introduced a generation of progressive fans to the appeal of grinding, mesmerising heaviness.

Isis frontman and Hydra Head label owner Aaron Turner has been attributed with using the phrase ‘thinking man’s metal’, which would eventually morph into the ‘post metal’ label. In the hands of a less capable band, this would sound pretentious and overwrought. In the nu-metal hangover days of the early noughties, Isis looked and sounded like the saviours of heavy.

Agalloch – You Were But A Ghost In My Arms

The same year Isis were staking a close claim to be the sonic successors of Neurosis, Agalloch were quietly striking a match that would light a storm in the deepest black. The Mantle was their second album, and it showcased a band buried in mystic lore, indebted to Norway’s black metal pioneers, but with an eye focussed levelly on the present.

John Haughm’s vocals echo the swinging of the tone, changing between deep-rumbling growls and Stone Roses-esque singing. Fiercely experimental, but fluid as a singular work, The Mantle became the blueprint for bands drawn by the dark heart and the dazzling light of this post-black metal scene.

Jesu – Your Path To Divinity

Broadrick’s involvement in the genre wasn’t to end with the demise of Godflesh. Jesu, an experimental outfit born from Godflesh’s last breath (the band name is the final song from their last album Hymns), shuddered into existence with the hermetic meanderings of 2004’s debut.

The heavily textured footfall of songs like Your Path To Divinity retained Broadrick’s instinctive ear for depressive atmospheres, whilst the soft exhale of the song’s last minute shows the genre’s ever inquisitive nature.

Cult Of Luna – Leave Me Here

Spawned from the ashes of hardcore band Eclipse, Cult Of Luna continue to invest a huge amount of clout in the emotion they deliver amidst a hammer heavy backdrop.

Harking from the experimental hotbed of Umea in Sweden, home for bands like The Refused and Meshuggah, their 2004 release of Salvation received almost universal critical acclaim, even garnering a 10⁄10 in Hammer’s hallowed pages.

Their back catalogue might have swollen since its release, but Cult Of Luna remain dedicated to serving a loyal fanbase; 2014's Beyond The Redshift festival was curated and put together entirely by the band.

Agalloch proved the dichotomy of their craft, creating beauty and desolation, and Alcest swept in behind. The French shoegazers achieved wonderful lush landscapes in their definitive work, Écailles de Lune, but left the barbs of their earlier aggression to poke through the fug. The one-two punch of the album’s opening, self-titled tracks are hypnotic and beautiful, drawing the listener towards the abyss that lurks just out of sight.

No post-metal list would be complete without the inclusion of Amebix, a band whose output in the eighties has been cited again and again as Neurosis’ reason for setting out their stall in the first place.

Having only released two albums before disbanding in 1987, they reformed in 2008 to release Sonic Mass, a record as dense in its musical delivery and styles as the name would suggest. Protracted acoustic passages make way for crushing riffs and thick Killing Joke-like miasma, with an unruly knack for hooks.

Come the end of the noughties, post-metal’s founding entities were facing extinction. By 2010, Isis had disbanded and Neurosis were in the middle of a five year drought between album releases. A new breed were pushing up through the gaps left by the genre’s forebears, headed by the likes of Belgium’s Amenra, a band who Scott Kelly (Neurosis’ co-founder) has felt to be the most direct disciple of his discipline.

The sloping riffs, the agonising drawl of the vocals, the distance between notes that leaves a tank-sized weight of expectation dragging down your bollocks… Scott Kelly liked it so much he appeared on their most recent EP.

Defying the notion that anything post metal has to be laboured or inaccessible, on-again-off-again Brit band Bossk is the sound of Judgement Day set to disruptive time signatures.

Currently signed to Deathwish Inc, their existence over the last ten years has only yielded a handful of tracks, yet every one displays an amazingly untethered approach to making progressive, aggressive music. Released in 2012, their track Pick Up Artist is possibly the danciest, heaviest piece of music to be released this decade.