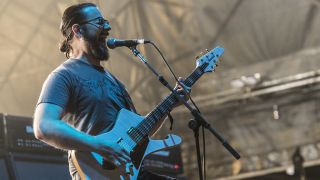 In the first of a weekly series, we're giving you the bluffer's guide to all the subgenres of metal your mates are into but you have fuck-all clue about. If you've ever found yourself nodding along out of courtesy because your knowledge is beyond minimal, allow us to give you some pointers on how to bluff it out – starting with black metal.

The epicentre. A rudimentary amalgamation of Motörhead, Priest and Kiss, Venom’s injection of slavering Satanism into the mix made them a joke to many, but for the likes of Tom G Warrior, Quorthon - who would both go on to become cornerstones of black metal’s first wave - and, later on, a bunch of Norwegian ne’er-do-wells, Cronos, Mantas and Abaddon’s vivid, outlaw stance put up a signpost to realms from which there was no turning back.

Mayhem - Buried By Time And Dust

The band that wrote the blueprint for black metal as we know it, it’s a tribute to Mayhem that Euronymous’s murder and frontman Dead’s suicide have never overshadowed the searing thrill of the music itself. Mixing hyperspeed riffing, otherworldly vocals courtesy of Attila Csihar and the kind of unholy atmosphere every black metal band since has tried to reach the source of, De Mysteriis Dom Sathanas was metal dragged into vortex far beyond the laws of daylight physics.

Emperor - I Am The Black Wizards

Not many people will argue against the case that Emperor are the greatest black metal band of all time, or that they raised the genre into new realms of art. In The Nightside Eclipse in particular, amplified black metal’s invocation of otherness as it imprinted the inhuman on an immeasurably vast and majestic canvas. Keyboards swirled like avenging angels of death, guitars surged as if attempting to reach escape velocity from this mortal realm and Emperor tore open new spaces that drew in innumerable voyagers in their wake.

Murderer and racist its creator may be, it says much about the universal nature of Burzum’s music that many of the bands it inspired sit at the opposite end of the political spectrum, even if the common ground was an obsession with the power of nature and the embers of some lost utopia still smouldering amongst its ruins. Filsofem was a searing pilgrimage, it’s harsh, textural riffing exerting a mammoth pull that fused personal yearning with a sweeping scope, and created another path for black metal in the process that beckoned the likes of Drudkh, Winterfylleth, Alcest, Wolves In The Throne Room, and pretty much the entire current generation of USBM.

A wildcard perhaps, but as an exercise you can divide black metal fans into two camps: those who got Beherit and those who didn’t. For some (notoriously, Enslaved), the Finns were a tuneless, artless, pisstaking dirge. For others, their ultra-primitive, autistic-sounding demonic rites merged black and death as it hit on a primal, subterranean level far deeper in the human psyche than anything approaching the rational. Beherit invoked a thing that should not be that can never be claimed by the guardians of the tasteful, but whose churning tumult can be found in the likes of Mystifier, Blasphemy and in the current wave of occult metal mystics such as Teitanblood.

Blut Aus Nord - The Choir Of The Dead

(taken from The Work Which Transforms God, 2003)

There are two main strands to avant-garde black metal – the carnivalesque, Norwegian variety embodied by Ved Buens Ende, Døodheimsgard and Solefald, and France’s mind-melting, densely philosophical psychonauts, Deathspell Omega and Blut Aus Nord. The Work… was truly revolutionary, its ever-warping pitches like being transported into a dust storm on Venus, but more importantly fucking with your internal orientation until you were putty for its spiritual ends. Like Deathspell later on, they took you through inhospitable hinterlands that resolved into destinations of unspeakable beauty granted to the hardiest of pilgrims willing to have their brains utterly rewired.

With black metal either slipping into orthodoxy or being diverted into ‘post’-styled realms to the point where it was losing all meaning, Watain came along to inject some serious purpose into it once more, recalibrating it to their own, indomitable will. Driven not so much by what they were against as what they were for, Watain’s devotional fury took cues from Bathory and Dissection and melded them to a sound and atmosphere all their own. It’s one who’s spiritual intensity has altered the landscape for bands both old (Markuk and Secrets Of The Moon have notably shown the Swedes’ influence of late) and new.