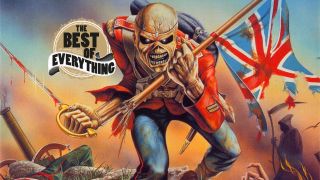 Throughout Iron Maiden’s career, founding member and bassist Steve Harris and vocalist Bruce Dickinson have often turned to historic events for inspiration. John Higgs is the author of Stranger Than We Can Imagine: Making Sense of the Twentieth Century and also, handily, a Maiden fan. We asked him to choose the band’s 11 best history-themed songs, from Egyptian epics to tales of bloody conflict…

ALEXANDER THE GREAT (Somewhere In Time, 1986)
“This has to be the gold standard for a history lesson disguised as a song. The lyrics are a recap of all the major events in the young Alexander the Great’s life, and you wouldn’t get such educational prose as “The Scythians fell by the River Jaxartes / Then Egypt fell to the Macedon King as well / And he founded the city called Alexandria” from the likes of AC/DC. Like the rest of bassist Steve Harris’ history songs, it’s been solidly researched. You could copy out those lyrics for your history GCSE and still be hopeful of an A*.”

POWERSLAVE (Powerslave, 1984)
“Where Steve Harris’ historical songs are scrupulously accurate, those by Bruce Dickinson lean more towards the theatrical – just listen to their Ancient Egyptian-inspired epic, Powerslave. Egyptologists would probably raise an eyebrow at the lyrics, but this is about the drama. The song details an existential crisis we can probably all relate to – you know, that one where you’re a Pharaoh and you can’t quite come to terms with your dual human and divine personas. Yes, that one.”

ACES HIGH (Powerslave, 1984)
“Live versions of Aces High begin with a slice pure history – a section of Churchill’s “We shall fight on the beaches…” speech, in which he set the tone for The Battle of Britain by refusing to contemplate surrender even as France fell. The song itself manages to combine many of Maiden’s lyrical obsessions, namely flight, history and lots of people being killed. There would almost certainly be a Maiden song about the aeroplane-inventing Wright Brothers if their story had a higher body count [although Dickinson touched on the subject on Kill Devil Hill on his Tyranny Of Souls solo album in 2005].”

THE TROOPER (Piece Of Mind,1983)
“The Trooper is Maiden’s account of the famous Charge of the Light Brigade’ during the 1854 Crimean War. Dickinson is known for coming over all patriotic and flag-waving (literally) during concerts, but, thanks to the lyrics being written from the point of view of brave, working-class soldiers, there’s still a universal appeal.”

THE CLANSMAN (Virtual XI, 1998) This is a good, traditional tale of Highlanders defending their land against the English. No, no, it’s not about the recent General Election – it’s inspired by the stories of William Wallace, aka Braveheart, and Rob Roy. There isn’t a huge amount of historical information in the song; instead, it focuses on honour, defiance, and lots of cries of “Freedom!”

PASCHENDALE (Dance Of Death, 2003)
“History lessons in school were obsessed with Tudors and Romans, while Maiden told you about all the other stuff. Paschendale (written by Adrian Smith and Steve Harris) is their non-textbook account of the battle of the same name, that took place during the First World War. In keeping with the theme, Nicko McBrain emulates Morse code with his hi-hat at the start. We can only hope that the message is an apology for their spelling mistake – it’s actually spelled Passchendaele.”

INVADERS (The Number Of The Beast, 1982)
“Axes, severed limbs, bloody corpses, rape and burning flesh – Steve Harris’ account of Viking raids on Britain around the 10th century is not for the squeamish. A cynical listener might even venture that the historical subject matter was just an excuse for some gore and slaughter.”

MONTSÉGUR (Dance Of Death, 2003)
“Slaughter! Death! A long time ago! French people! All the classic Maiden history tropes are bundled into this gruesome retelling of the siege at the castle at Montségur in 1244, where over 200 Cathar people were burned to death as heretics after refusing to renounce their faith. Dickinson’s lyrics include references to the Knights Templar and the Holy Grail, which was said to be smuggled out of Montségur during the siege, but his mentions of Illuminati symbolism like eyes and pyramids are probably stretching it.”

QUEST FOR FIRE (Piece Of Mind,1983)
“Maiden don’t just do history – they do prehistory too. Just don’t expect this one to help you through any exams; Steve Harris’s fanciful lyrics would fail miserably on account of being, well, completely made up. Quest For Fire tells the tale of a Neolithic man competing for fire, and is based on a French novel from 1909. What Harris did was take that novel, decide it needed more dinosaurs, and turn it into a song.”

THE PILGRIM (A Matter Of Life And Death, 2006)
“This retelling of a pilgrim’s voyage to America aboard the Mayflower in 1620 stresses the religious aspect of the journey, but doesn’t gloss over the nasty bits. The lyric ‘Pilgrim sunrise, pagan sunset’ alludes to the journey being as much an end as it was a beginning – many of the Pilgrims died from scurvy on the ship, or froze in the cold when they reached America. You can always rely on Maiden’s historical insights to be on the grim side.”

THE LONGEST DAY (A Matter Of Life And Death, 2006)
“From the same album as The Pilgrim – the war concept record A Matter Of Life and Death – comes this account of the D-Day landings. It’s relatively optimistic war song for Maiden, as the soldier in question doesn’t actually die. When stood next to the band’s other tales of fallen soldiers dying far from home, The Longest Day is positively jubilant. Maiden’s long history of writing songs about heroes of old reaching a grisly end means they well and truly own the genre, although they might not always make the best history teachers.”

John Higgs was speaking to Thea de Gallier. His book Stranger Than We Can Imagine: Making Sense of the Twentieth Century is out now.

Like this? Check out this Top Ten of Iron Maiden’s artwork, as voted for by TeamRock.com readers…

The Top Ten Iron Maiden Album Sleeves – As Voted For By You!