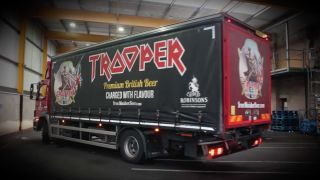 The first cases of Red 'N' Black leave the brewery

Iron Maiden have shared a video of their Red ’N’ Black beer leaving the Robinsons Brewery.

The band’s third ale was announced back in March and was inspired by the song The Red And The Black from latest album The Book Of Souls.

It’s a rich porter that looks black but glows red when lit up, and clocks in at 6.8%ABV in a bottle, or 5.8%ABV from a cask – and it’s available worldwide now through importers. It’ll arrive on Morrisons shelves in the UK from Monday, September 5. It can also be purchased through Robinsons website.

It follows the original Trooper, launched in 2014, and the stronger 666 edition that arrived in 2015.

“With millions of pints sold in 55 countries, Trooper remains a phenomenal success. This year we’re happy to be releasing another limited-edition beer that broadens the Trooper range in an ever-evolving, vibrant market.”

Iron Maiden recently wrapped up their The Book Of Souls world tour and released a thank you message to fans for their support on the extensive trek.