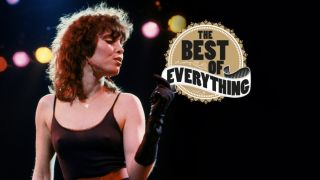 30. CHRIS OUSEY
Chris Ousey is one of the best vocalists to have ever emerged from the UK. His first band, Virginia Wolf, blew the cobwebs off the Brit AOR scene with their perfectly crystallised melodic rock, Ousey’s unique vocal – all raunchy yelps and sky-high screams – their calling card. Chris went on to front AOR heroes Heartland and continues to ply his trade to a world that really needs to wake up and smell the coffee.

29. PAT BENATAR
During the early 80s, Pat was omnipresent, seducing a fledgling MTV with her fresh tomboy image and singing songs about female empowerment, pre-empting the Spice Girls by at least 15 years. Neither did it hurt that her guitarist, co-writer, producer and husband Neil Giraldo was a talented player who’d previously played in Rick Derringer’s band.

28. THOM GRIFFIN
You’ve never heard of him, but Mr Griffin is one of the most accomplished vocalists to have ever swung a mic stand. Replacing future Toto singer Fergie Frederiksen in little-known AOR demi-gods Trillion, Griffin was a vociferous vocal god. Possessing a timbre that could reduce battle-hardened warriors to tears, he took Trillion to heights just south of the Moon.

27. FRANK DIMINO
Frank Dimino had an extraordinary range pitched somewhere between Demis Roussos and Geddy Lee, perfect for Angel’s jubilant anthems and pure progressive pomp. Sheathed in white, Frank cut an intriguing figure, with a mob of tumbling black locks and enough five o’ clock shadow to silence the gender police. He never amounted to much post Angel – a tragedy.

26. JIMI JAMISON
Memphian Jamison debuted with obscure southern rockers Target, before Cobra put him on the AOR map big-time. Sleek yet raunchy, the band grabbed the attention of Survivor, who hired him to replace departing singer Dave Bickler. Jamison’s raspy vocals are delivered with polished professionalism, striking a balance between hard rock and easy-on-the-ear commercial sweetness.

25. MIKE TRAMP
Not just a pretty boy, Danish-born Mike Tramp, leader of New York-based four-piece White Lion, had a style and delivery that could wring a tear from every dry eye in the house. Sure, we know White Lion mainly as a cock rock unit, but Tramp’s ear for melody and Vito Bratta’s precision guitar playing lent them a dollop of harmonious drive, setting them apart from the other big-haired bozos of the day. Tramp was always best on ballads, his slightly Euro-inflected vocal lending the songs a slightly eerie, almost ethereal quality.

24. LEIGH MATTY
Meet Leigh Matty, vocalist for late 80s Brit AOR hopefuls Romeo’s Daughter, a band that snagged not only a major label deal but also managed to persuade multi-platinum producer Robert John ‘Mutt’ Lange to down tools with AC/DC, Foreigner, Def Leppard and twiddle the knobs for them instead. Talented and beautiful, Leigh injected the jam into RD’s doughnut, coming across as a sultry minx with ambition far beyond the confines of low-rent venues like the Marquee or Walthamstow’s Royal Standard. The band released a new album, Spin, in 2015.

23. MICHAEL MCDONALD
McDonald initially came to prominence as a member of The Doobie Brothers, soulfully steering their sound away from hard rock to the AOR middle ground. During this period, they scored a series of top-flight hits, allowing McDonald to assert his presence not only as a Doobie Brother but also as a subsequent solo artist, recording a series of brilliant blue-eyed soul albums that straddle the AOR fence with the same meticulous balance as the late Robert Palmer and Steve Winwood. McDonald, though, has the edge – a rich baritone stretching to a heart-breaking falsetto in the blink of an eye.

21. TERRY BROCK
Although the band were predominantly Scottish, it was American vocalist Terry Brock who turned out to be Strangeways’ ace in the hole. Brock’s range was immense, flying high as a kite one moment, before swooping back down to earth with a whisper the next on utterly exquisite songs that provided him with a launching pad to Jupiter and beyond.

Did you miss the first-part? Get up to speed here…