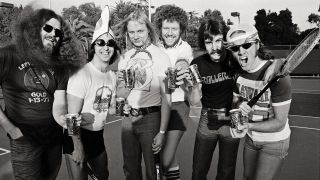 Kansas' Carry On Wayward Son single helped set the bar for the 1970s – a glory era for both AOR and progressive music.

The band Kansas, from the tiny rural town of Topeka in the state after which they were named, were somewhat unique in that their music was a mellifluous yet hummable distillation of the two styles. By 1976, with three well-received albums to their name, the six-man group were within touching distance of major success. And yet somehow it also felt as though the walls were closing in.

Carry On Wayward Son: Kansas' final throw of the dice

“It was a frustrating time,” guitarist and chief songwriter Kerry Livgren told Classic Rock back in 2004. “Having opened for just about every group you could possibly name, we had become such a hot property that nobody would play with us any more. For instance, Mick Fleetwood later told me that Fleetwood Mac died a death every time we went on first. We were a hard act to follow.”

Still known as an ‘albums band’ back then, what Kansas lacked was a single that would get radio airplay. As the band’s fourth album, Leftoverture, was readied, word arrived from Don Kirshner (the entertainment impresario who had gambled by signing Kansas when nobody else would) that, their growing reputation notwithstanding, this would be a final throw of the dice for the band.

“Back then I wrote maybe seventy per cent of each album, with [vocalist] Steve Walsh supplying the rest. And on the very first day of rehearsals, Steve came to me and said that he had nothing – not a single song,” Livgren recalls with disbelief and a chuckle. “I don’t relish that kind of pressure, but with hindsight it really brought out the best in me.”

Each night, Livgren would write a song and the following morning rehearse it at the vacant store in a strip mall in Topeka used by the band and their producer Jeff Glixman. Seven songs, including the aptly titled six-suite epic Magnum Opus, which eventually brought the record to a close, were worked up before the group relocated to the middle of a remote Louisiana swamp to record them. And then something remarkable happened.

“I brought in a song I’d written at the last minute, and said: ‘Guys, maybe you ought to listen to this,’” Livgren says.

“We were packing up our stuff when Kerry walked in with his last-minute addition,” drummer Phil Ehart remembers. “For such a very, very special song, it barely made the record.”

“When they heard it, everybody’s eyebrows raised,” Livgren adds, evidently proud. “And of course it changed everything for Kansas.”

Beginning with an irresistible a cappella chorus and built on a stirring guitar motif, with Robby Steinhardt’s dancing violin of for once taking a back-seat role, Livgren’s last-minute song, Carry On Wayward Son, was a marriage of complexity and melody that gave the group the answer to their prayers, in more ways than one. It became the hit they craved so badly. “From that day on, wherever we were we turned on the radio and heard ourselves,” Livgren laughs.

In keeping with the group’s strong religious beliefs, the guitarist still suspects that a helping hand from above may have played a part.

“It’s an autobiographical song,” he explains. “Parallel to my musical career I’ve always been on a spiritual sojourn, looking for truth and meaning. It was a song of self-encouragement. I was telling myself to keep on looking and I would find what I sought.”

Living up to the band’s early enthusiasm for the song, Carry On Wayward Son peaked at No.11 in the US, helping to propel parent album Leftoverture to No.5 in the Billboard Hot 100. As is fairly commonplace, however, the apparent good fortune of a hit song eventually exerted a negative effect on the band. Steve Walsh, his writer’s block now unblocked, contributed massively to their next album, Point Of Know Return, which actually peaked a place higher than its predecessor, although it was Livgren who wrote the track on the album that gave the band a hit single, Dust In The Wind.

Behind the scenes, though, jealousy between some band members was growing. “When the writers [of the hits] suddenly receive very large cheques indeed, it breeds some animosity,” guitarist Rich Williams later admitted. “Some of us found that situation tough. Certain people also started saying: ‘I don’t wanna work as hard or travel as much.’ I’d say: ‘That’s because you’ve got yours. Let me get mine.’ Money changes everything.”

Livgren, who had been in and out of the group since its formation, and with them through good times and bad, left Kansas, seemingly for good, after writing, producing and appearing on their 2000 album Somewhere To Elsewhere. In 2009 he suffered a stroke, but has since recovered sufficiently to work on various projects. He received a standing ovation when he joined Kansas on stage almost a year and a half later.

Four decades on, Carry On Wayward Son has become more even famous than the band that recorded it. It was the second most-played track on US classic rock radio in 1995, topping the same chart in 1997, and at the last count, having appeared in TV comedy shows and films that include South Park and Anchorman: The Legend Of Ron Burgundy, has logged up more than two million downloads during the digital era. “To me, its inclusion [in such low-brow productions] isn’t in the least bit demeaning – it’s kind of an honour,” Ehart offers. “We look at everything when those types of requests come in. Although we take our music seriously, we don’t mind a little fun being poked at us. We love laughing at ourselves.”

Even after all this time, Kansas without Livgren still enjoy playing their calling card live. “When that a cappella vocal intro kicks in, there isn’t an audience in the world that doesn’t go crazy,” the drummer says of Carry On Wayward Son. “It’s inspirational for the fans, and for us too.”

In moments of self-doubt, Ehart tries to avoid wondering what might have befallen Kansas had Livgren not written his masterpiece – and which almost didn’t make it onto the Leftoverture album.

“Without Carry On Wayward Son we’d have to have waited around for Dust In The Wind – if we’d gotten that far,” he says. “It’s quite possible that Don Kirshner might not have signed up for a fifth album. Things could have been very different.”