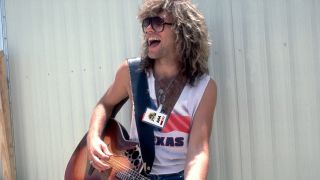 20. KEITH MURRELL
Keith Murrell is best of a tiny handful of British AOR vocalists who can give the Americans a run for their money. With Airrace, he helped craft one of the definitive melodic rock albums of the mid 80s. Burrell was later poised to replace Lou Gramm in Foreigner, only to be beaten out at the eleventh hour by Johnny Edwards. Not Mick Jones’ brightest move.

19. DENNIS DE YOUNG
Dennis wasn’t your average lead singer but his vision, passion and dogged determination to succeed made dreams come true. His onstage theatrical shtick gave Styx’s songs just the right amount of depth to separate them from the pack, arguably turning him into one of the world’s great live performers.

18. KEVIN CRONIN
As a kid, Kevin Cronin must have been hooked on Phonics. With a unique singing style based on extending every syllable of every word of every sentence, the effect is quite mesmerising and sometimes a little perplexing. Still, after an uncertain tenure at the very start of the REO Speedwagon story, Kev’s distinct style came in handy when, against all odds, they started having massive hit records like Keep On Loving You in the early 80s. They had once been a perennial support act, but suddenly became arena fillers, basking in multi-platinum success and nothing up an incredible string of single, all propelled by what seems like Cronin’s extraordinary speech impediment.

17. STEVE WALSH
Athletic frontman of über progressive rock giants Kansas, who stormed the US charts with a neat hybrid of technical pomp and wistful melody, best expressed on their epic smash hit Carry On Wayward Son (inspired by 19th century slave abolitionist John Brown, who graced the cover of their eponymous 1974 debut album). Without Walsh, Kansas might have been just another bunch of midwest no-hopers looking to ride the coattails of the original Brit prog invasion, but his voice took them to levels of success they could have only dreamt about. But it’s not all about Kansas. During the early 80s, he formed Streets, a cracking melodic rock band who recorded two highly combustible albums that sadly failed to ignite the charts.

16. ROBIN ZANDER
With his striking blond locks, pencil-thin build and a voice from heaven, Robin Zander helped elevate the slightly zany Cheap Trick to major stardom. Big in Japan when nobody really knew what that meant, hordes of giggling Japanese schoolgirls fainted at his mere presence. A string of hit albums followed, but like all shooting stars the sparkle soon faded, leaving the band exposed to cruel major label machinations forcing them to use outside material – which rather ironically, produced their biggest ever his The Flame, a song penned, bizarrely, by an ex-member of Brit prog outift Atomic Rooster.

15. EDDIE MONEY
Edward Joseph Mahoney first arrived on the scene as a sort of white soul singer, wielding a sax instead of an axe. Press reports made much of a phoney NYPD career (apparently he was a trainee in the typing pool) but it wasn’t until his fourth album, No Control, that the AOR cognoscenti started to embrace this husky-voiced power-popper, watching wide-eyed as tracks such as Shakin’ and Think I’m In Love gave him hit single success. I remember sitting with Money one time in a London hotel suite, and it was like talking to Rodney Dangerfield on acid.

14. BRYAN ADAMS
Hailed primarily in AOR circles as a songwriter rather than a singer, there can be no denying the impact of Adams’ voice on some of the best material to have ever been crafted by a Canadian this side of, er, Randy Bachman. Most of the key tracks in Bryan’s canon sound like he’s singing with a throat full of wood shavings, in a good way. Immediately identifiable and straddling that difficult line between sounding hoarse and mellifluous, Adams’ early work gives the impression of limitless capacity. The fact that on stage he looks like he’s been placed under temporary house arrest is neither here nor there. Early rock’n’roll hits like Run To You and Summer Of ‘69 later gave way to MOR balladry for movie soundtracks that, while hardly electrifying, certainly proved massively lucrative: (Everything I Do) I Do It For You, from Robin Hood: Prince Of Thieves, infamously held the top spot in the UK singles chart for four long months during the summer of 1991, a record which remains unbeaten.

13. DAVE BICKLER
Millions know the voice, but few know the name. Bickler is the unsung hero of AOR vocalists, having sung on the second most popular track in the entire history of melodic rock (after Journey’s Don’t Stop Believin’), namely Survivor’s Eye Of The Tiger. Bickler had been with the band for four years when Sylvester Stallone heard their_ Premonition_ album, and in particular the track Poor Man’s Son, requesting that they writer a similar tune for his upcoming movie Rocky III. Natch, the song became an American anthem, used for just about any occasion that requires grit and determination. Bickler’s performance is truly astonishing – raspy yet melodious, perfectly matching the song’s revving riff.

12. GLENN HUGHES
Not really known as an AOR vocalist per se, more a man influenced by R&B who just happened to cut his teeth in two seminal British rock bands: funk rock pioneers Trapeze and hard rock behemoths Deep Purple (where he played bass and harmonised with David Coverdale, injecting their love of soul into the group’s pompy riffage). When the latter group crash-landed in 1976, Hughes went on an infamously debauched and debilitating five-year bender, issuing very little in the way of notable product until he teamed up with guitarist Pat Thrall in Hughes/Thrall. Together, they cut one of the greatest, most underappreciated AOR albums of all time, featuring catchy songs and Hughes’ greatest ever vocal performance.

11. JON BON JOVI
We might be lambasted by many for not placing Jon Bon Jovi higher in our chart. Bu this is an exercise based not on popularity but, quite rightly, on vocal ability and in that respect, our boy Jon must take a back seat. Sure, he has all the chutzpah, good looks and the get-up-and-go to make him a star several times over, but even his most dedicated fans must admit that his range had always been, er, restricted. That was until Canadian producer Bruce Fairbairn fixed things with the colossal-selling Slippery When Wet, a record that suddenly gave Jon a voice and hits. If Jon is upset by his placing on this chart, he can always dry his tears on a million dollar note.

Been away? Trapped under a pile of AOR vinyl until now? Then catch up on numbers 40–21 below!