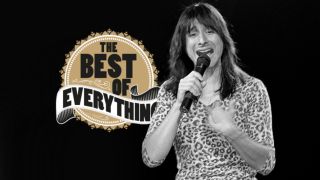 Here it is, the final instalment in our four-part rundown of the greatest power balladeers in melodic rock. So, which singer with a gilded larynx will come out on top?

10. STEVE OVERLAND
Overland possesses one of the most flavoursome voices you’ll hear this side of Paul Rodgers, Robert Palmers or Frankie Miller. His voice has a deep, velvety quality, with the sort of intonation that suggests he’s lived a thousand years and seen it all. Give him the right material and you’ve got a match made in heaven. Steve’s tenure with FM over the years has seen him come within inches of commercial success, only for it to be cruelly snatched away at the last moment. Sure, he’s got a reputation that’s second-to-none, but that doesn’t make up for years of underachieving, despite the fact that the band enjoyed a renaissance on Radio 2 and appearance at Download in 2010.

9. BOBBY KIMBALL
Toto are very much the epitome of AOR as we know it. Their diligent approach to every aspect of compositional craft is to be commended and, frankly, not unexpected bearing in mind that they were mainly comprised of the creme of the LA session world, musicians who anonymously laid down the faultless instrumental tracks behind many of pop and rock’s greatest hits. Singer Bobby Kimball had previously been in an obscure Three Dog Night spin-off band called S.S. Fools (don’t bother trying to locate the album, it’s really not the considerable effort) before finding his feet with the boys in Toto and cutting their debut album. The results were spectacular, giving Kimball a platform to shine brighter than any other singer of the era. An industrious band, Toto could do no wrong, notching up hit after hit, culminating with the worldwide smash Africa, from 1982’s Grammy-winning multi-platinum album IV. By this point, however, touring had taken its toll upon the singer, and Kimball was a wreck. The band mounted an intervention of sorts which resulted in him leaving, only to return some 14 years later after they had ploughed through umpteen replacements only to conclude that the original was probably the best.

**8. JOE LYNN TURNER
**He launched his career in a blaze of obscurity, via a band called Fandango (who infamously boasted a guitarist by the name of Rick Blakemore) only to be ‘discovered’ by Ritchie Blackmore, who had tired of Rainbow’s then-vocalist Graham Bonnet. Blackmore’s plan was simple: he would use Turner’s voice to ram-raid the US charts. For five minutes, it worked. I Surrender reached Number Three on the UK singles chart and Rainbow’s profile went into overdrive. But it wasn’t to last. Turner was blessed with the perfect voice for US FM radio but, try though Rainbow might, the airwaves resisted them at every opportunity, leaving Blackmore no option to dump the band and reform Deep Purple. For Joe, it meant a lifetime hopping from one high-profile project to the next, including, of course, a stint in Deep Purple. The only questionable episode was teaming up with Yngwie Malmsteen, and that was just because of the poor-man’s Rainbow accusations. Joe’s output has always been of the highest calibre.

7. ERIC MARTIN
Cherub-faced Martin was a fixture on the Bay Area scene for much of the early 80s with his band 415 (San Francisco’s area code), later changed to EMB – the Eric Martin Band – upon signing with Elektra Records. Failing to make commercial headway, Eric dismantled the band and commenced a solo career, issuing two albums of perfectly precise AOR that forced the melodic rock world to sit up and take notice. The songs were strong (mostly covers and co-writes) but it was Eric’s voice that really caused heads to turn. With the voice of an angel, his tone was straight from the Stax stable, immediately comparable to Otis Redding, Wilson Pickett and Marvin Gaye. Of course, his greatest commercial achievement was the formation of powerhouse rockers Mr. Big, a virtuoso ensemble whose influences stretched back to the early 70s and acts like Free, Humble Pie and Led Zeppelin. Eric’s impressive roar drew instant comparisons to Paul Rodgers and Steve Marriott, hardly surprising, considering their own personal debts to 60s R&B.

6. JOHN WAITE
Lancashire born and bred, Waite’s introduction to the world of AOR came via British ex-pats the Babys, with whom he scored several sizeable hit singles. When that project fell apart, he went solo, hitting the big time in 1984 with Missing You, a million seller. When Journey ceased trading in 1987, Neil Schon and Jonathan Cain turned immediately to Waite, inviting him to front a new band that they were putting together called Bad English, a supergroup aimed precisely at Journey’s recently abandoned audience. Their second single, When I See You Smile, was an immediate success, topping the US chart and cementing Waite’s reputation as one of the world’s greatest singers.

5. ANN WILSON
Ann Wilson is unquestionably the greatest female AOR vocalist of all time. Her early years with Heart were spent fine-tuning a folky hard rock sound of a Led Zep hue; she could imitate Robert Planet perfectly, but the hits soon started to dry up, and by the early 80s the band were wandering around looking for an appropriate exit strategy. Columbia Records insisted on a visual makeover and bringing in outside songwriters, resulting in the still-thrilling AOR hits like Alone and These Dreams. Ann and guitarist sister Nancy later dismissed this era of the group, but we would respectfully suggest that they are wrong: the quality of material and performance was hugely impressive, Ann delivering some of the finest vocals of her career.

4. MICHAEL BOLTON
Modelling a hairstyle based on a controlled explosion in a deckchair, Michael Bolton’s journey through AOR was initially slow but rapidly accelerated when he issued two jaw-dropping solo albums. Still, though, this combination of his vocal range and Grade-A material eluded commercial success. The Hunger, issued in 1987, found him entering the MOR snooze zone and a world of homogenised family entertainment. Still, he should worry – at the last count, he’s sold well over 52 million albums worldwide.

3. BRAD DELP
Brad Delp emerged from the superunknown in 1976 as lead vocalist for Boston, whose self-titled debut was an instant success, notching up sales in excess of 17 million units. The sound was built on brilliant songs, a great guitar sound and, perhaps most conspicuously, Delp’s incredible signature vocal. Regrettably, guitarist Tom Scholz’s autocratic leadership, together with various lawsuits, served to impede the band’s progress, resulting in just three albums over 17 years, leaving Delp’s incredible talent cruelly underused. As time moved on, he had pretty much become just an occasional contributor to Boston, one of several singers. Sadly, he took his own life in 2007, depriving the world of a truly incomparable voice.

2. LOU GRAMM
One of the few American vocalists to rival the melodic earthiness of the early-70s Brit blues howlers. Gramm’s hurricane of a voice – part Paul Rodgers growl and part David Coverdale raunch – gave both form and function to Foreigner’s hook-laden pop rock compositions, providing a foundation to impress with his unique and immediately identifiable style. The great thing about Gramm (like, say, Rodgers) was his ability to handle both gutsy rockers and gentle ballads with equal confidence and ability. There’s a gospel quality to his vocals too, something that Foreigner leader Mick Jones soon realised and made conspicuous use if, especially on I Want To Know What Love Is, holding his own alongside the New Jersey Mass Choir (and, indeed, The Thompson Twins and Broadway actress Jennifer Holliday, who also contributed to the song’s mammoth backing vocals). As the singer flirted with a successful solo career, Gramm and Jones grew apart, resulting in a perhaps inevitable split within the ranks of Foreigner. They reunited in the mid-90s for a remake of I Want To Know What Love Is, and even continued touring after Gramm bravely weathered debilitating treatment for a benign brain tumour, but have since gone their separate ways. A pity, as given the right circumstances a reactivated alliance between the two could have been a force to be reckoned with.

1. STEVE PERRY
Appointed in 1976, Steve Perry’s initial contribution to Journey was with the Infinity album, a platinum record that set the scene for a string of super-selling releases and riches beyond their wildest dreams. Perry’s effortless switch from breezy improvisation (La Do Da) to epic bombast (Wheel In The Sky) provided a template from which future grandeur would merge, a metamorphosis, broadening the appeal of Journey while the rest of the competition looked on aghast.
Perry’s reference points evolved from diverse if not unexpected sources, including the R&B of Sam Cooke and Smokey Robinson. These influence would eventually erupt to the surface on 1981’s multi-million selling Frontiers LP, and the blatant soul-strutting of the penultimate Perry-fronted Journey album Raised On Radio (especially Girl Can’t Help It) securing his place not only in the hearts and minds of melodic rock lovers but reaching out into a wider world of mass pop culture.
His good natured bonhomie, enhanced by boyish looks and the world’s most charming smile, knocked fans off their feet. Sporting a formal black tailcoat, performances came alive as he swished around the stage entrancing audiences with charisma that instantly burnt the oxygen right out of the venue. It was pure dynamite.
As the undisputed king of the power ballad, Perry reigned supreme. Faithfully, from Frontiers, is sublimely moving. Who’s Crying Now made me reach for a crate of Kleenex, and Open Arms was like navigating by moonlight. There are many more, of course.
Perry released his first solo album in the wake of Frontier’s impressive success, 1984’s Street Talk followed a decade later by his second, For The Love Of Strange Medicine. Journey meanwhile, went on hiatus between 1986 and 1989; following their comeback album Trial By Fire, Perry finally vacated the Journey mic stand in 1997, when an injury to his hip while hiking in Hawaii meant he couldn’t tour with the group without painful replacement surgery, which, understandably, he was reluctant to undergo.
But, after almost two decades largely away from the spotlight, Perry has revealed that he’s almost completed work on a new solo project. When the album finally surfaces, it will be a most welcome return.
As we wrap up our countdown of the greatest AOR vocalists of all time, check out Perry’s performance on Mother, Father. In this track, taken from Journey’s 1981 album Escape, listen to how he pushes himself to the absolute boundary of human sensitivity – an emotional masterpiece.