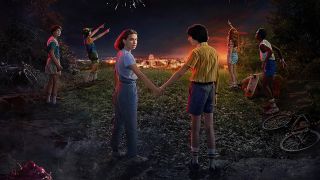 When Stranger Things flickered onto our screens in 2016, surrounded by a level of fevered hype usually reserved for Marvel film releases and royal weddings, it quickly became clear that we had a modern classic on our hands.

A delicately-crafted paean to an era of pop-culture that many of its viewers hold in a fond – and deeply protective – nostalgic glow, its retro soundtrack has become almost as much of a focal point as the show itself. While most of the series' soundtrack comes from the minds of synthwave composers Kyle Dixon and Michael Stein – AKA one half of the band S U R V I V E – it also cherry-picks the best of the 80s' pop and rock, dipping into the back catalogues of Peter Gabriel, Foreigner, The Cars, The Go-Go's and more.

Season 3 picks up in 1985, where we find the gang a little bit older, a little bit wiser and a whole lot more interested in matters of the heart. So, prepare yourselves for the vaguely gratuitous amount of power ballads in the list below.

Here, the best songs to appear in Stranger Things season 3, and where exactly in the action you can hear them. Disclaimer: This list may contain the vaguest of spoilers. Think twice about reading on if you wish to view the series with completely fresh eyes.

The name may not be immediately familiar, but trust us: as soon as that trumpet kicks in, you'll recognise this funky little ditty. Mansfield, a composer from London who was pretty prolific in the 70s and 80s, is actually better known for penning the theme tunes to both UK sports show Grandstand and the opening theme for the BBC's Wimbledon coverage. So now you know.

Hear it: As the gang find seats in the cinema, around 10 minutes in to episode one.

Stalwarts of the 80s Arizona new-wave scene, this band – known to fans as The Gents – perfectly captures the energy of the scene and era. With this slice of power pop, you can picture the big hair, skinny ties and keytars as soon as the opening bars hit.

Hear it: Nancy and Jonathan's expletive-laden reaction to waking up late, around 13 minutes into episode one.

Having been entranced by rockabilly and lured into a lifestyle of pink peg slacks and bouffant quiffs, the Stray Cats – helmed by the now legendary Slim Jim Phantom – spearheaded a full-scale rockabilly revival in the 80s. The band's second single, this classic has become one of the best-known and most loved of their oeuvre.

Hear it: Around 17 minutes into episode one, when the gathered masses of Hawkins enjoy the town pool.

The Cars - Moving In Stereo

This slice of electro new wave from The Cars is one of the band's best experimental moments, all brooding synths and jangling guitars. Its tantalising, seductive undertone makes it the perfect introduction to the topless Billy.

Hear it: Billy starts his lifeguard shift, much to the delight of the town's women, about 18 minutes into episode 1.

Huey Lewis & The News - Workin' For A Livin'

Not ol' Huey's best-known track – that, of course, was the one immortalised by actual 80s classic Back To The Future – this 1982 single was written by Lewis about his life as a hard-up truck driver before he made it big with The News. And don't be mistaken – this high energy, blues-tinged bar rock is as quintessentially 80s as any moody synths.

Hear it: As Nancy dashes to her office to deliver lunches to her ungrateful colleagues, around 22 minutes into episode one.

What was that we said about power ballads? REO Speedwagon's biggest hit presses all the right buttons on that power ballad beverage machine and delivers a hot chocolate with six sugars and a Cadbury’s Flake on top. As sweet and sticky as you like.

Hear it: About 37 minutes into episode 1, as Hopper practises his speech while Mike and El make out in her bedroom (we warned you about all the teen romance).

Cutting Crew - (I Just) Died In Your Arms

Yup, another power ballad. This song, apparently written about the delicate act of ejaculation, was taken as the lead single of the pop-rockers' 1986 album Broadcast. Which technically makes its inclusion here a little cheeky, as we're meant to be in 1985 America, in a pre-IJDIYAT world.

Hear it: As Mrs. Wheeler gets ready for her appointment with Billy, about 44 minutes into episode 1.

Jim Croce - You Don't Mess Around With Jim

It could, and should, be Hopper's theme tune, really. You don't mess around with Jim indeed, and this gleeful 1972 single, written about a pool hustler in New York, has been used in various TV shows and movies to indicate we have a badass called Jim on our hands.

Hear it: As Hopper finishes a bowl of cereal and sings along with his car radio as he drives to Mellard's General Store, around five minutes into episode two.

If there was ever a band to soundtrack the tenacious hi-jinks of Nancy, then the Go Go's are it. Famously the home of Belinda Carlisle before she made her fortune as a solo crooner, this Go Go's track is an irresistible slice of attitude-laden power-pop perfection.

Hear it: Around nine minutes into episode 2, as Nancy heads off to the mall to investigate the sinister rats.

It makes sense that this DC hardcore band should soundtrack a skating scene, all its snot and fury making it perfect fodder for a failed ollie. A little older than their peers in Minor threat and The Faith, Black Market Baby's garage-influenced punk owes more to the likes of The Clash and New York Dolls than the blistering hardcore DC came to be known for.

Hear it: Almost 13 minutes into episode two, as Max struggles with a skateboard.