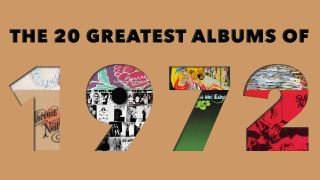 Elsewhere, 11 Israeli athletes were murdered by the Black September Gang at the Munich Olympics, five White House staffers were arrested for burglarising the offices of the Democratic National Committee, and the American Space Shuttle Programme was announced. It wouldn't fly until 1981.

In music, Wings made their debut performance at Nottingham University (Paul McCartney's first public show for six years), Dark Side of the Moon was performed for the first time (at The Dome, in Brighton), Aerosmith were signed to Columbia Records, and Creedence Clearwater Revival disbanded.

While At Fillmore East is arguably the Allmans’ defining statement, Eat A Peach is far from rotten fruit.

A combination of new studio tracks and live material left over from the Fillmore recordings, the sprawling, live Mountain Jam is balanced by studio cuts such as the fragile Blue Sky, and the punchy One Way Out and Trouble No More.View Deal

The second of a brace of albums after putting together a new version of the Jeff Beck Group is another varied and masterful collection of funk-laced rock-metal from one of the most innovative, influential and maverick guitarists rock has seen.

Coming after Master Of Reality, Vol 4 was always going to struggle against such a great record – but it only lost the fight on points. It may not match its predecessor for killer riffs, but it shows Black Sabbath embellishing their sound and beginning to explore different themes.

Overall, it might not have the steamroller weight and momentum, but Supernaut is among the heaviest tracks the band ever recorded, which is counter-balanced by the gentle ballad Changes.View Deal

With their heavy riffs and high-pitched lead vocalist, it’s easy to see why Welsh power trio Budgie were often seen as a hybrid of Black Sabbath and Rush.

But really Budgie have a sound of their own, and the classy metal on Squawk – highlighted by Drugstore Woman and Hot As A Docker’s Armpit – really does make you wonder why Budgie never took off in as big a way as many think they should haveView Deal

Like only a few of all the albums listed here, Ziggy Stardust… is gold-plated from start to finish, with not a poor/filler song in sight.

Covering a range of musical bases, and with Mick Ronson’s sublime guitar work simply sparkling throughout, when it comes to highlights, with the likes of Starman, Suffragette City and Moonage Daydream, you really are spoiled for choice.View Deal

What can you say about such an all-time great album as this in just a few words? It’s got power, it’s got intensity, it’s got amazing instrumental pyrotechnics.

It’s also got a brilliant overall vocal performance, it’s got some unforgettable songs, and it’s got the guitar riff to trounce them all: Smoke On The Water. It’s not a bad album, you know.View Deal

Deep Purple - Made In Japan

And this isn’t a bad album either, if you don’t mind understatement. It features material from Deep Purple In Rock, Fireball, and Machine Head (not bad songs, then) extended, embellished, improvised on and generally mangled into twisted metal monsters.

With Ritchie Blackmore’s guitar playing and Jon Lord’s virtuoso displays on Hammond organ adding to the highly energetic and electric performances, this is both a great Deep Purple album and a great live album.View Deal

Less of a prog rock edifice than their previous records, ELP’s fourth album had more to do with focused, disciplined songwriting than with bombast and grandeur (although those things were not completely thrown out with the bath water). And on that level, it shines.

The songwriting is tight and precise, the performances are relatively restrained, and the result is the favourite ELP album of people who are not big ELP fans.View Deal

After a period of always looking like they were going to record something a bit special that would raise them to the next level, Foxtrot lit the blue touch paper and launched Genesis into the prog/art rock stratosphere.

With not a single damp squib in sight, the magnificent, shapeshifting, gleefully complex 23-minute Supper’s Ready is the glittering centrepiece of a scintillating album.View Deal

Jethro Tull - Thick As A Brick

Conceived as a single idea in several pieces in a themes-and-variations ‘suite’, Thick As A Brick is a one of prog rock’s touchstones.

Mott The Hoople - All The Young Dudes

The album that gave the band a new lease of life just as they were about to take their last breath. And what a new lease it was.

There are a number of wonderful but underrated band songs alongside the Bowie-written title track and Lou Reed’s Sweet Jane, while Bowie sideman Mick Ronson arranged the strings on the stirring Sea Diver.View Deal

Featuring Lou Reed at his most tuneful and accessible, with a collection of strong songs that he would arguably never better: Walk On The Wild Side, Satellite Of Love, Perfect Day.

Produced by David Bowie with Mick Ronson on guitar, piano and arrangements – a good year for Dave and Mick, then.View Deal

Given a critical kicking at the time, this double album has come to be widely regarded as one of the Rolling Stones’ definitive records, even though (or perhaps because) it contains relatively few Stones favourites.

At times dark, shadowy and bleak, at others it’s relentlessly upbeat and rockin’ – only repeated listening reveals all of its treasures.View Deal

They looked like an overdressed bunch of freaks, and Roxy Music’s genre-defying, futuristic-primitive debut record was a completely different animal to anything else that was around at the time.

Todd Rundgren - Something/ Anything?

The album that cemented Todd Rundgren’s reputation as a genius in the studio (he played virtually all the instruments) and a gifted songwriter, this was also the record that brought him a much wider audience.

Something of an epic journey through the history of popular music, sprinkled with some exquisite pop-rock songs Something/ Anything? is one of rock’s greatest and genuinely awesome single-handed achievements.

Slade may be mostly remembered as one of the really great British singles bands, but this early-days (real) live album shows convincingly that Slade knew how to cut the mustard in front of an audience.

Typically raucous, boisterous, loud and stomping, with the element of chaos just adding to the electric atmosphere, it really does make you wish you’d been there.View Deal

Steely Dan’s debut album, is a gloriously slick, superbly crafted and stylishly played collection of songs that raised the barrier for American pop-rock.

Standout tracks among a number of real gems include Dirty Work, the blissful Do It Again, the country-flavoured Brooklyn and the driving Reelin’ In The Years – the latter featuring a spine-tingling, cheese-grater guitar solo that is reputed to be one of Jimmy Page’s favourites.View Deal

Yes - Close To The Edge

With this album, Yes’s ambitious eclecticism was stepped up a gear. Comprised of just three tracks, with the sprawling Close To The Edge taking up half of the album, it’s a tour de force of changing rhythms and time signatures, virtuoso instrumental bombast, lush harmonies and soaring and swooping melodies.

It was keyboard player Rick Wakeman’s second Yes recording – he made his debut on the previous year's Fragile – and his contribution was crucial.View Deal

Having used his previous album, After The Goldrush, to emphasise his more sensitive, pastoral side (and with great commercial success), on the wonderful Harvest Neil Young continued in the same vein.

Typified by Heart Of Gold and Needle And The Damage Done, this record received similarly deserved acclaim.View Deal

Continuing the basic simplicity of their debut, ZZ Top this time had a much better collection of songs on which to hang their gloriously dirty blues-rock boogie.

The production is raw, the guitar and bass have just the right amount of grimy fuzz, and highlight Just Got Paid is an absolute stonker.View Deal