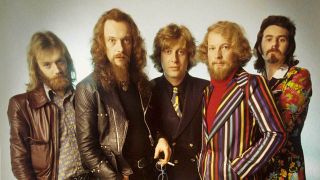 Jethro Tull in 1972: \u201cThick As A Brick was the mother of all concept albums\u201d (Image credit: Gijsbert Hanekroot\/Redferns)

Monty Python. It might seem a little odd to mention the influential British comedy troupe as we begin a journey through the story of the groundbreaking album Thick As A Brick. But Jethro Tull mainman Ian Anderson believes there’s a common thread.

“Monty Python lampooned the British way of life,” says Anderson. “Yet did it in such a way that made us all laugh while celebrating it. To me, that’s what we as a band did on Thick As A Brick. We were spoofing the idea of the concept album, but in a fun way that didn’t totally mock it.”

It’s often been said that the seeds for 1972’s Thick As A Brick (the band’s fifth album) were sown when its predecessor, ’71’s Aqualung, was wrongly perceived as a fully-blown conceptual piece. Myth has it that Anderson was angry about this misconception.

“Not angry, no,” explains the man nearly four decades on. “I was actually mildly irritated and wryly amused. However much I insisted that Aqualung wasn’t a concept album, the media still persisted in treating it as such. They seemed to believe the whole record was a major religious story. The truth was that three or four songs were linked by questioning the nature of religion. But the rest were stand-alone tracks. So, after this whole scenario, I thought, ‘OK, we’ll not only now do a real concept album, but we’re going to make it the mother of all concept albums!’.”

Adding to this determination was Anderson’s belief that progressive rock had become a touch too self important, needing to be pulled down a peg or two from its Olympian pretensions.

“When progressive rock started out, it was all about bands such as ourselves moving beyond merely being influenced by American blues. We stopped trying to be the next Fleetwood Mac or Chicken Shack – in other words, derivative of Elmore James – and began to take on board so many diverse musical ideas. It was exciting and dynamic. But, by the time the 1970s had begun, bands like ELP were a little up their own arses. Everything was too serious and overblown. So, we set out with Thick As A Brick to show up this side of the genre.”

The centrepiece of the album was a poem, ostensibly written by 12-year-old Gerald Bostock. However, this is a totally fictitious character, created by Anderson himself. Despite attempts over the years to uncover the true identity of the poet, the truth is that ‘Bostock’ has no connection to anyone from Anderson’s past. However, we can reveal that the poem itself does draw from the man’s childhood.

“Yes, there’s an autobiographical element in what I wrote. As a child, I was a bit of a rebel. Most of my peers aspired to going to grammar school, getting eight O Levels and three A Levels, then becoming part of conventional society. That never appealed to me. I was the sort of child who loved spending time collecting pond life and then analysing it. I also loved science fiction stories of the era (the 1950s), because they told of a different, exciting future. So, I stood apart from others of my age, and drew on this for the character of Gerald Bostock. But he himself is a fiction.”

“I suppose I have to admit that I really imposed the whole idea on the other guys,” laughs Anderson, a benign dictator in this instance. “But, for whatever reason they went along with it, and actually warmed to the task once we got stuck into the music.”

Tull elected to work out the album during two weeks of intense rehearsals using the Rolling Stones mobile studio.

“This was based in Bermondsey, a rather dreadful part of South London. The way it worked was that I’d spend the morning in my home in Hampstead – sadly, not the posh part of that North London suburb – and get three or four minutes of music down on a sheet of paper from an exercise book. Then we’d meet as a band and go through not just the new part I’d written, but everything from the beginning. So, gradually we’d build up the piece.”

Finally, in December 1971, the band entered Morgan Studios in North West London and, under the production aegis of Anderson himself, recorded the album (which is effectively just one composition, split into two movements) over a period of a fortnight, including the mixing stage.

“It’s only in recent times that I’ve appreciated how complex the music is,” admits Anderson. “I was only 24 at the time we began to put this together. Yet there are so many weird time changes and musical innovations on the album. I would never compare what we did back then to jazz rockers like Weather Report or the Mahavishnu Orchestra – they were really amazing musicians – but we were a little more sophisticated than the usual riff rockers you’d find on the scene.”

But the music was just part of the ambitious concept the band put together. Almost of equal importance was the cover, which was in effect a 16-page newspaper called The St. Cleve Chronicle & Linwall Advertiser, which was a spoof of the sort of local newspapers prevalent around the UK at the time.

“That was a massive undertaking,” says Anderson. “Fortunately Roy Eldridge, our A&R man at the label [Chrysalis], had worked as a journalist on local papers prior to joining the company. So, we drew on his experience. We put together a lot of silly stories and also used lyrics from the album itself. We also got the road crew, label people and girlfriends to pose for photos.”

One of those names used was Derek Smalls, who emerged over a decade later as the bassist with the fictional heavy metal band Spinal Tap. “I was convinced that Harry Shearer (the actor who played the character in the celebrated movie) must have gotten the name from Thick As A Brick, especially as the Smalls in the film smoked a Peterson pipe – and the only three people I know in rock’n’roll who smoke such a pipe were all members of Jethro Tull! But, when I got the chance to interview Harry for a US TV show, he denied ever hearing Thick As A Brick. I find that somewhat hard to believe.”

However, the album did get some cultural recognition in the States when it was featured in an episode of The Simpsons. Not only does the character of Martin Prince sing part of the song in the episode Girls Just Want To Have Sums, but the original is used over the end credits. Perhaps this isn’t too surprising when you consider that the album reached Number One in the US when released in May 1972 (it hit Number Five in the UK).

“I must admit to being a little surprised that we got to the top of the charts over there,” says Anderson. “But everything had been building for us. Aqualung sold steadily, so either Thick As A Brick was going to take off, or we’d just sink. However, I’m not sure our American fans understood the humour behind our live performance on the subsequent tour.

“We decided to bring all the characters mentioned on the album and in the cover newspaper to life, and it was quirky, very British. We weren’t trying to be comedians, just to enhance the concept. The rest of the band got the chance to step outside of their dapper personae. It was funny because we had a laugh. But in the US… well, all I can say is that I’m none too certain they understood what we were doing. I recall a few years later when the film Monty Python And The Holy Grail was released… I’d help to finance it, and saw a preview in New York. The audience laughed in all the wrong places, which was what happened with Thick As A Brick live.”

But perhaps this comes down more to the whole premise of progressive rock rather than anything else – at least as far as Anderson is concerned.

“Progressive rock is a purely British phenomenon. And these days all of us – and I include the likes of ELP here – know that there was a sense of fun about it. Privately, we all saw the silly side, we were like John Cleese in a bowler hat lampooning the bureaucrats, while revelling in it.”

Any spoof done well enough enhances both the perpetrators and the intended victims – think of Spinal Tap and the heavy metal genre. But, surely if it’s done too well then it becomes indistinguishable from the real thing? How does Anderson react to the fact that Thick As A Brick is frequently cited as the ultimate prog rock album?

“Job done, I’d say. We set out to make the mother of all concept records, as I stated earlier, and if that’s the way people see the album after all these years, then we achieved the ambition. It is hard sometimes to differentiate between what’s serious and what’s a send-up. But, for me, that’s beauty of true prog rock – it must have both.”

For more classic Tull, then click on the link below.