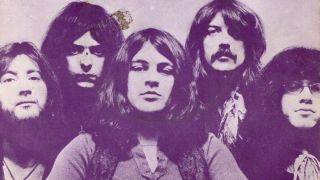 So Smoke On The Water has just been voted the Greatest Riff Of All Time and some people don’t like it. “It’s so old!” they say. “It’s boring!” they bleat.

But think about it. What did you really expect?

It’s like asking people what their favourite sandwich is and being surprised that the most popular answer is “cheese”. What, most people didn’t choose Crayfish and Rocket? Cream Cheese and Strawberries didn’t make the cut? Brie and Avocado was unfairly overlooked? Gimme a break.

Smoke On The Fucking Water is what people think of when they think of A Riff. And it is A Riff (unlike some of the songs on this list): memorable, hooky, direct, big and dumb and undeniable. The Smoke riff takes no prisoners and it powers one of the biggest, most obvious and over-played songs in rock music.

C’mon. Even Deep Fucking Purple are bored of Smoke On The Fucking Water. Deep Purple – who have recorded 14 albums in the 45 years since Smoke came out – go do a radio interview in the US to promote their new album and when they walk out of the door the DJ, who’s just chatted with them for 15 minutes about their latest album, plays Smoke On The Fucking Water and Ian Gillan wants to smash their perfect teeth in. (Actually, Ian Gillan is pretty chill, by all accounts. He probably just gets someone to pass him the Pinot. I mean, who can be arsed?)

So Smoke On The Water might be boring, but it is timeless. It is classic. And it is the very definition of “riff”. The problem is that lists like this make the world of rock seem monochrome, when it’s really technicolour.

There are “better”, younger, more interesting, more complicated, more graceful, less predictable riffs than Smoke. Of course there are. Just like there are “better” paintings than the Mona Lisa. Romantic paintings, surreal, post-modern, pre-Raphaelite, you name it. But ask people to name their favourite/the greatest painting, and you can be sure the Mona Lisa is going to be up there.

A colleague of ours once interviewed the guitarists from Korn at the peak of their careers.

“What are your favourite riffs?” she asked.

“You know,” she said, “like Smoke On The Water or Whole Lotta Love…”

“Oh right,” they said. And then they thought about it for a bit.

The first point here is that Smoke On The Water and Whole Lotta Love have almost become synonyms for ‘riff’. The word ‘riff’ means nothing without them. They are “riff”.

And the second point? Never, ever, ask the geniuses from Korn to be on your pub quiz team.

World Guitar Day 2017: Everything you need to know!

The Greatest Guitar Riffs Of All Time – Revealed!