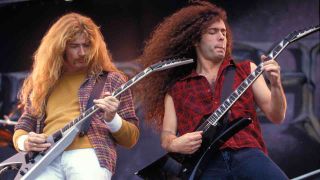 As vocalist and guitarist of German tech metal virtuosos Unprocessed, Manuel Gardner Fernandes has an expert grasp over his instrument.

The band gained worldwide attention with debut album Covenant thanks to their stunning guitar work, showcasing a novel take on djent and refreshing approach to metalcore.

With their latest album out now, Unprocessed have been busy on the road supporting none other than genre masters Animals As Leaders.

Yet, even with all that under his belt, there are some guitar solos even Manuel struggles to master. We caught up with him to find out his 10 most tricky guitar solos, in descending order, from "least difficult but still difficult" to "this one is fucking insane"...

"As soon as the, in my opinion, strongest Born Of Osiris album came out, I tried to learn the solo and failed. It is in my opinion one of the most beautiful solos ever written and connects many elements with one another.

"I particularly like the combination between plain shredding and high fidelity phrasing over the positions. It was also written by my favourite shredder, Jason Richardson"

"It's definitely not the most complicated solo in the world but it was the very first solo I could play on the guitar, and that's why it's at the 9th place.

"It was the first time I learned the tapping technique too. Metallica was the biggest influence for me at that time and that’s why I started a band."

"The same with this solo, it’s pretty nostalgic. As a little boy, Pantera's Dimebag was my biggest idol.

"His highspeed shredding during the breakdown in the middle part of Domination was the most brutal thing I knew and impressed me. It was also the first time I got to know the Phrygian scale."

"Arpeggio over Arpeggio and at a fast speed - I was very proud when I could play it back then. This solo was also written by Jason Richardson.

"Lead guitar over breakdowns has always impressed me, it was very good for practicing sweep picking and it was also the first video I uploaded on YouTube."

"Our guitarist Christoph Schultz wrote this solo for the opening track on our latest album Artificial Void. He did a really sick job and I especially like what he did with the transition in it from A major to C major.

"There are also some really cool arpeggios, as well as some tasteful and melodic bends towards the end!"

"It is easy to break the solo, especially because of the quieter background.

"The rhythm and the phrasing are high performance, these aspects combined with his delayed tone creates some really cool textures and you never feel like Plini's showing off or overplaying. His solos always serve the song."

"Megadeth's Tornado of Souls is a very special one to me, not only because it was one of the first solos I learned on the guitar but also because Marty Friedman perfectly shows his ability of astutely combining far Eastern and Japanese scales with metal, building up a melodic web.

"The solo itself has a beautiful syntax, which erupts in a beautifully arpeggiated finale. Overall I was always fascinated by Friedman’s unique and extraordinary playing style."

"That solo immediately stunned me after listening to it for the first time, it has a strong construction and a fantastic climax. Furthermore it functions as a perfect ending for an outstanding instrumental album."

"This is, in my opinion, the most difficult solo I know right now. Jason Richardson plays incredibly fast and precise, few can match. Wow, what a solo – gives me goosebumps every single time!"

"It took me 3 weeks to play it and every time I saw Guthrie playing the solo I took it as a massive inspiration. Guthrie’s ability to improvise and his creative approach to the guitar is breath-taking, and his legato technique is on another level.

"Even though the entire song is built up like one big solo, you don’t get tired of listening to it because of the combination of various styles and influences. My number one."