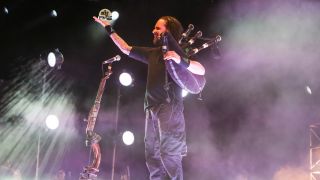 The unmistakable sound of misty Caledonia is capable of making even the most stoic of Scottish men’s eyes glisten, but generally, bagpipe music tends to divide opinion.

If the guitar represents a phallic potency harking back to pagan fertility rituals, then bagpipes are surely the emphysemic wheezing of a sheep who refuses to go gently into the abattoir. Being an instrument completely incapable of subtlety does have its benefits though, and bagpipes have found a home in rock music. Here, then are 10 of the best examples…

A charismatic figure with a voice capable of exuding comic charm one moment and snarling malevolence the next, Harvey is perhaps best known for his covers of Tom Jones Delilah and Jacques Brel’s Next but his legacy of theatrical rock is worth revisiting. From his 1974 album The Impossible Dream, Anthem is one of Harvey’s more thoughtful moments, with the bagpipes kicking in to fine effect around the six minute mark.

If a man in a tartan skirt and cheeks like Dizzy Gillespie is too ridiculous how about a grown fella duck-walking in a school boy’s uniform? Producer George Young (brother of Angus and Malcolm) persuaded frontman Bon Scott to pick up the ‘pipes for the AC/DC’s 1975 signature tune and from his droning entrance to a playful musical call and response with the guitars, Scott crafted that rare thing: bagpipes you want to play again and again.

No bagpipe list is complete without an appearance from what is probably Paul McCartney’s forty-third best song. Written during his retreat to the bucolic windswept peninsula after which it is named, it represents pipe-rock in its purest form and as such became the then-bestselling single in UK history and became a Christmas Number One single. Which is actually mental because it’s not that good, in the grand scheme of things.

Everything that was good about moody post-punk and anthemic rock is captured in The Bunnymen’s stirring 1983 single. Where contemporaries had one eye on filling stadiums, Ian McCulloch and co. were more interested in exploring Eastern-tinged tunings and utilising bagpipes to add another level of grandiosity. It’s also the only known rock song that makes the word ‘mustard’ sound mysterious.

Applying a prog fan’s understanding of rock music to pure pop music during something of a golden era for the genre paid dividends for Tears For Fears. With a keen interest in psychotherapeutic techniques (true), they hit paydirt with a song so grandiose that you barely even notice the bagpipes.

Classic ‘80s production. A man blessed with Jason Donovan’s hair. An impassioned message and an accompany video designed to really make you think, man, You’re The Voice had already pulled out all the epic-rock stops before it cranked some bagpipes all up in the mix. In 2012, it inspired a number of flashmobs who descended on public locations to blast out the song. That’s not annoying, though is it. No. Not at all.

As intrinsic a part of their aesthetic as baggy tracksuits, dreadlocks and white vests, bagpipes feature on numerous Korn songs. From an appearance on Shoots And Ladders on their 1994 debut, no release was without a man sporting a half-hearted moustache flapping his arm like a rooster ablaze. Handily someone has put together this Korn bagpipe medley – featuring Lowrider, Dead, *I Will Protect You *and Liar – if you have a spare 10 minutes and a high pain threshold.

Incorporating Celtic music and imagery as only Americans can, Dropkick Murphys’ output is what happens when street punk grabs Irish music in a friendly headlock. Spicy McHaggis and Scruffy Wallace played on a plethora of Dropkicks tunes, including the straight-for-the-jugular Amazing Grace. With names like that, perhaps they were destined to take up the instrument.

The only surprise about Biffy’s pipe usage on the thunderous Stingin’ Belle is that it took them so long to get round to it. Recorded in the studio with Eric Rigler, who has played on everything from the Titanic soundtrack to Ronald Reagan’s funeral, this rousing coda is best heard in a Scottish field after three days of being off your blooter on Buckfast and neeps.