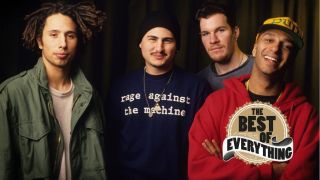 We’ll just go right ahead and say it: Rage Against The Machine were one of the most important metal bands of the 1990s. With their anarchic take on metal, they incorporated elements of funk, hip-hop and pretty much everything in between with a devil-may-care regard for convention, making way for a sound both fresh and unique in the process. They also reinforced to us all what a powerful political force rock music could actually be.

So, it makes sense that their incendiary sounds inspired a legion of bands in their wake. One such band is Kent hardcore crew Feed The Rhino, whose own innovative heavy sounds were born from a shared love for the Los Angeles funk metal squad. So, it seemed only right to ask them to provide us with the ultimate Rage Against The Machine playlist, which is exactly what they’ve done. Check out their choices, along with video for single Timewave Zero, below.

Know Your Enemy (Rage Against The Machine, 1992)

Oz Craggs: “This song is a masterclass in groove and syncopation. The way the band bounce between the two main riffs is effortless, and the guest vocals from Maynard add a whole new layer to the Rage sound.”

Fistful Of Steel (Rage Against The Machine, 1992)

Oz Craggs: “I love how the dynamics of this song are so wide. The verses are practically hip hop, with a drum and bass groove, and the guitar just playing noise that’s like a 90s West Coast sample. Then the chorus drops with one of the band’s heaviest and gnarliest riffs. I think the chorus and middle eight riffs of this song are a huge influence on Feed The Rhino.”

Lee Tobin: “This song blew my mind! It was the first Rage song I ever heard and definitely the most memorable. A pure riff machine – straight from the off it grabs you with its head-banging groove and opening riff. It makes you want to go nuts. Zack’s vocals are second-to-none throughout, with his potent lyrical contact spurred on by his venomous hip hop swagger. As a 15 year old teenager, listening to this track for the first time was an awaking.”

Lee Tobin: “The way this track twists its way through just over two and a half minutes is awesome. The build from the main riff and driving vocals into the first chorus; feeling that first big drop really makes you respect the dynamics of the song. Again through the second verse, where parts drop in and out and build with such intensity, backed up by the unusual but cool as hell guitar tone and heavy bass… Well, it’s just Rage genius! This song’s a banger.”

Killing In The Name (Rage Against The Machine, 1992)

James Colley: “Apart from the creative riff masterclass you always get from with Rage, hearing this on live radio and them being asked not to swear was one of the funniest things I’ve heard. Obviously the opposite was inevitable, this was all help towards making it Christmas Number 1. Brilliant!”

Take The Power Back (Rage Against The Machine, 1992)

James Colley: “With one of the strongest rhythm sections of any band, Rage demo this perfectly in this song, and for me has unbelievably good lyrics that just make you want to learn them. As a guitarist Morello shows off his unbelievable tekkers to a mountainous level on this track. Hearing this for the first time just left me cross eyed!”

**
Chris Kybert:** “I just think this song is pure genius. The way it opens with that unique Morello sound and crushing drums, and then explodes into that riff that sounds like nothing you’ve ever heard before blows my mind. I’ll never forget the first time I heard Zack De La Rocha charge into the track like a wrecking ball, grunting those lyrics ‘Yeah, rolling down rodeo with a shotgun, these people ain’t seen a brown skin man since their grandparents bought one’, and thinking ‘Holy fucking shit, this the best singer I’ve ever heard’. What a statement – punk rock or what?! It’s just a phenomenal song, and that ending when Zack’s screaming “Just a quiet peaceful dance” gives me chills every time. Amazing.”

Chris Kybert: “I can remember seeing Rage perform this track live at Rock Am Ring festival on the telly. I think it was around 1999⁄2000. It was the first time I’d watched the band live and it changed everything for me. The moment I saw Rage perform, and Zack leave his soul on the stage, I knew I wanted be a part of a band of brothers that fought for something every night and lived every second of it. The experience left every hair on the back of my neck standing, and I’d found my new heroes. Not only that, but the song itself is absolutely stunning. It’s a work of art from the intro to the main hook and riff, the poignant lyrics, right through to the middle eight build up, before the drop into that ‘Now testify!’ statement, before the chorus rips through you one last time. What a song! what a band.”

Sam Colley: “I love how this song opens up with a big smash in the face with its siren-like guitar. It does exactly what it says on the tin – makes you wake up! The opening riff is also very reminiscent of the song Kashmir by Led Zeppelin who, like Rage, are one of my personal favourite bands.”

Township Rebellion (Rage Against The Machine, 1992)

Sam Colley: “Firstly, who knew a cowbell could sound so cool?! Township Rebellion has got the perfect blend of funk, hip-hop and rock’n’roll, which combined with Zack De La Rocha’s political rebel yell lyrics is still relevant. This song sounds fresh and could easily have been released this year instead of 1992, which just goes to show how timeless this band really are.”

Feed The Rhino’s new album The Silence is out on 16th February via Century Media. Catch them on tour at one of the dates below, and check out the video to single Timewave Zero:

Why did Rage Against The Machine stand naked onstage at Lollapalooza in 1993?

The real story of Rage Against The Machine's debut album