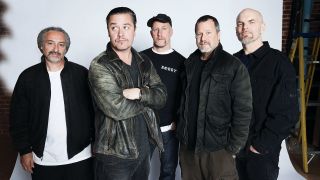 Quite possibly the closest band in terms of style to Rage Against The Machine, the influence of Chuck D’s incendiary hip hop crew cannot be understated. Public Enemy made rap hit harder sonically, whilst also chronicling the seething anger toward the establishment in 80s Black America in a perfectly blunt and uncompromising way. Galvanising an entire generation of musicians in the process, Public Enemy provided a blueprint for rock, rap and dance music to morph into a far more aggressive and articulate beast in the 90s. Their influence on Rage, and hard music at large, is enormous.

From the ashes of Minor Threat, whose pure, white-hot blasts of noise mixed with social polemic were also a massive influence on Rage Against The Machine, came Fugazi. Arguably, Ian MacKaye’s eclectic quartet were the seed from which the entire alternative rock scene of the 90s grew. They were clearly paying attention in the Rage camp, and you can bet your ass a band that took early hardcore and distorted it into jazz rhythms, dub basslines, defiantly anti-capitalist lyrics and an unmovable DIY moral stance had an effect on Tom Morello’s crew.

It might seem like an odd comparison, but there’s more to Rage Against The Machine than anger and righteous polemic. Namely two utterly unique guitar players. Van Halen had Eddie Van Halen, who took 70s hard rock and twisted it into his own unique style before being copied by a million chancers. Tom Morello’s attitude was much the same: inspired by Eddie, not just to copy his idol’s style, but to create his own. The squalls of noise over both bands’ debuts blew minds the world over.

The original crossover kings. Such was the influence of Bad Brains that they are claimed by both punks and metalheads as one of their own. Forming in Washington, DC, they lit the touchpaper for the first batch of American hardcore bands, then relocated to New York to add a metallic sheen to their unpredictable noise. Take this level of musical eclecticism, from punk to reggae to metal in the blink of an eye, and mix with some of the most unhinged and energetic live shows our world has ever seen, and you’ve got everything we associate with Rage Against The Machine.

Sly And The Family Stone

The psychedelic funk soul pioneers may predate Rage Against The Machine by a good couple of decades, but their music and attitude still resonate today. Coming off the back of Woodstock’s musical revolution, Sly Stone and his band eschewed the feelgood soul they were known for and replaced it with a darker and heavier deep funk sound on 1971’s classic There’s A Riot Goin’ On, made against the backdrop of the Manson murders and the militant Black Panthers. That idea of drawing on cultural happenings, and their bass-driven musical style, loom large over Rage’s career.

Possibly the world’s first politically minded, truly revolutionary rock band, Wayne Kramer and the MC5 existed with two simple aims in mind: to push their far-left, anti-establishment agenda as far as they could, and deliver explosive and powerful blues-tinged garage rock. Or, as Kramer himself puts it in simpler terms, to ‘Kick out the jams, motherfucker’. The 1960s flower power movement didn’t know what had hit it. It’s an amalgam of ideas and an approach that Rage Against The Machine picked up and ran with for their whole career, updating their attack for Generation X 20 years down the line.

The New Yorkers have provided inspiration to countless bands over the years, mostly for their refusal to stick to one style – a trait they absolutely share with Rage Against The Machine. The musical chameleons started as a bog-standard punk band, before becoming the enfants terribles of the music world when they switched to bratty rappers, finally gaining critical acceptance for the classy hip hop and acid funk of their final years. During this period they also developed something of a social conscience, which, ironically, could well have been accelerated by the presence of a certain LA-based supernova.

In terms of hearing a band and thinking ‘What the hell is that?’, there aren’t many as distinct or unusual as The Dead Kennedys. The San Francisco quartet were lumped in with punk, hardcore, post-punk and whatever else people could throw at them, but were too odd to fit the mould of any genre. Much like Rage, their influence is huge, yet no one sounds quite like them. They also were fuelled by the righteous indignation of frontman Jello Biafra, and were partial to a slogan or two to boot. Which, as we all know, is something Rage have utilised to great effect in their career, too…

If there was one band that proved a genuine soundtrack of boundary-less musical styles in the alternative rock era, then it was Faith No More. Whether it was Ministry, Korn or System Of A Down, all of the 90s’ most successful offspring owe a debt to FNM’s groundwork. Rage Against The Machine are no different – particularly when you consider the impact that Faith No More’s funk/rap/ metal hit Epic had on MTV. Suddenly, the idea that forward-thinking and unique bands were able to break big on a major stage was no longer a pipe dream. Only a few years later, Rage were one of the hottest bands on Earth.

The most recognisable hardcore band in history. A band that not only provided a soundtrack for the volatile mindset of Los Angeles in the mid-80s – an LA that most of Rage Against The Machine grew up in – but actively played a part in the chaos themselves, with their shows often sparking riots. But where Black Flag’s DNA looms the largest over Rage is in their seethingly angry, yet introspective My War album. Take a moment to listen to a song like Settle For Nothing and you will hear the same quiet-to-deafening dynamic and utterly unrestrained anger that is pure Black Flag. A generation was listening. Rage Against The Machine were among them.

The A-Z Of Rage Against The Machine