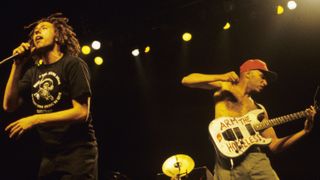 They Were Genuinely Ground Breaking
Rage Against The Machine weren’t the first band to meld the worlds of hip-hop and rock together, but they were the first band to do it with such verve and panache. They were also a band of multicultural, mixed raced individuals that put their varied influences, experiences and into a massive sonic blender like no one that had ever gone before.

They Still Sound Fresh Over Twenty Years Down The Line
Whack on their, now 234 year old, debut album and try and deny that it’s dated or lost any of its potency. In the same way as Sabbath still sound crushing and The Sex Pistols still sound furious, the self-titled Rage record still seethes with an uncontrollable, impassioned, eclectic, unrestrained Molotov cocktail of sublime music. It still puts most metal bands that have come since to shame with its forward thinking nature. Will anyone ever catch up?

They Pick Great Bands To Cover
Cover albums can usually be indulgent, label quota filling rubbish, but when Rage Against The Machine released Renegades they opened the alt-rock generation up to the work of Springsteen, Dylan, Cypress Hill, Minor Threat, The Stooges, MC5 and Eric B And Rakim. All of which, in case you didn’t know, are worth listening to.

Tom Morello Is A Guitar God
In the era of grunge it wasn’t considered particularly cool to be proficient or showy with your instrument. The approach of Morello was to think about his technique in a totally different way, writing riffs and solos, yes, but also coaxing all manner of unheard squeals and sounds from his guitar. As the man himself says ‘I loved Eddie Van Halen and Randy Rhodes but there were already so many people doing that. In Rage I was the DJ in the band.’ This thought process has made him a true one-off.

Insane Live Shows
There’s something about the combination of a large stage in a field, a shit-load of people and Rage Against The Machine which melds to create the perfect storm. If you’ve ever been present at one of their shows you’ll know that this is a band for which the word ‘intense’ barely does justice. In the last 20 years only The Prodigy and Slipknot can hold a candle to the kind of uncontainable madness that you’ll see at a Rage show, both on stage and off.

They Unite The Tribes
For most sentient human beings hating a person on the basis of the band t-shirt they are wearing is a pretty absurd thing to do, but in the early 90s there was still a large amount of segregation between fans of metal, punk, rap and the like. One of the great things about Rage shows was looking at the guy in the Metallica shirt banging his head in between the punk decked out in a Black Flag vest and the dude grabbing his crotch like he was at an NWA show all to the same band. That we can now like everything, regardless of ignorant genre politics, is massively due to them.

They Backed Up Their Politics With Action
‘Yeah, we really hate THE MAN! We, like, hate war and inequality and… you know… stuff like that! Now buy our record please, this private jet doesn’t pay for itself you know!’ That tends to be the sum total of most so-called ‘political bands’ attempt at speaking out about issues. Rage are different, Tom Morello is a Harvard graduate who started up the Axis Of Justice with System Of A Down’s Serj Tankian to bring music fans attention to the ‘Fight for social justice’, Zack De La Rocha spent time living with Mexican freedom fighters and Rage even closed Wall Street trading whilst filming the video for Sleep Now In The Fire. This is no empty rhetoric. Rage walk the walk as well as talk the talk.

They Wrote The Best Christmas Number One EVER
Killing In The Name had been an anthem for a couple of generations of rock fans already when Jon and Tracy Morter decided to campaign to have it shoot to the Christmas number one spot in 2009. That a band like RATM could be number one at all was phenomenal, that they could do it with the most radio unfriendly sound of their career ON CHRISTMAS WEEK was insane, that it was all started by a single Facebook group bored of X-Factor toss is possibly the greatest triumph for rock over artless, premeditated bullshit that has ever happened. Simon Cowell et al had a strop, Louis Walsh claimed Rage could never headline Wembley (even though they had a decade previously), Cheryl Cole pleaded with people to make it a British person at number one even though it was a cover of a Miley Cyrus song and Joe McElderry boo-hooed that his nan didn’t like it. As if anyone gave a toss about his nan and her opinion. Rage celebrated by playing a free show in Finsbury Park the following summer and Joe McElderry probably works in Footlocker or some shit now.

They Influenced An Entire Movement In Music
You might not like it, hell even the members of Rage themselves have done all they can to steer clear of any association, but without them the 90s nu-metal explosion might not have happened. And don’t just think that this means RATM are responsible for Linkin Park and Limp Bizkit, plenty of hugely credible and varied rock acts, from Stuck Mojo to Pitchshifter to System Of A Down have held them up as a huge inspiration. Muse formed after watching them headline Reading and even retro rockers Monster Truck recently cited them as a band they aspire to ape.

They Are Untameable And Dangerous To Mainstream Culture
Poor Simon Mayo nearly lost his job when he played the full and uncut version, f-words and all, of Killing In The Name on BBC Radio 1 when it first entered the chart. 19 years later, clearly having not learnt their lesson, the BBC interviewed Rage live on BBC Radio 4 and let them play the song again on the understanding that they wouldn’t swear. But they did it anyway prompting furrowed brows and tongue-tied apologies from the shows presenters. Fuck you John Humphrys, I won’t do what you tell me!

For more on RATM, not least their free show at Finsbury Park in London, then click the link below.

Rage Against The Machine: Live At Finsbury Park