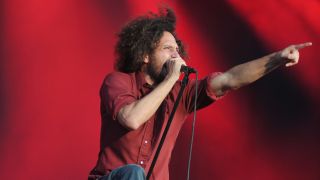 Killing In The Name has been voted the best Rage Against The Machine song of all time by Metal Hammer readers. In a poll posted last week on the Hammer website, Rage’s iconic 1992 track claimed the top spot by just one vote.

By far the most famous song in RATM’s catalogue and an anthem for an entire generation, its message and vitriol is just as fresh and vital today as it was 25 years ago.

The song was a direct response to what the band saw as endemic racism in US security agencies, with further reference to the Ku Klux Klan.

Producer of Rage Against The Machine’s self-titled debut Garth Richardson previously spoke to Classic Rock about the societal influences on Zack De La Rocha’s writing for the album.

“I was in LA when the whole Rodney King episode went down… That was a big thing for the city. Zack and I had a long talk about the power of speech and how whatever he needed to say, he had to say it. Malcolm X was a major influence in Zack’s life, and this was not the time to back down.”

These are the top ten Rage Against The Machine songs as chosen by Metal Hammer readers.

In the new issue of Metal Hammer we tell the story of Rage Against The Machine’s seminal debut album and how it sparked a revolution throughout the metal world and beyond. We have new and exclusive interviews with the band and producer Garth Richardson, plus so so much more.

The new issue is in stores now and available to buy online.

Guerrilla Radio: The influences behind Rage Against The Machine