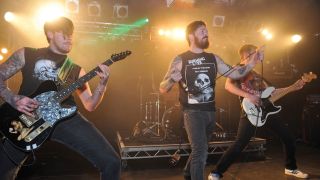 What can people expect from your forthcoming Camden Rocks show?

Lee Tobin [vocals]: “Playing Camden is always a buzz. We always look forward to going back there and having a great time! This is our first time on the Camden Rocks festival, so we’ll be bringing a full Feed The Rhino attack!”

Are there any other bands on the Camden Rocks bill that you’re going to check out?

“I’m just going to harass my mate Benji from Skindred! Nah, we’ll be hanging around most of the day so we’ll try to watch as many bands as possible.”

“It’s going great so far! We’ve already been out on an incredible tour with Enter Shikari, which was mindblowing. Being able to reach out and play to such awesome crowds every night. Just incredible!”

**What have been the best and worst gigs in your career as a band so far – and why? **

“Playing a sold-out Camden Roundhouse was by far the best show we’ve played! It was incredible! I try to take the positives from every show we play to be fair, but we did play a show not too long ago where we were opening the night and there were some problems with getting the doors of the venue open on time, so we ended playing a very, very big room to pretty much the bar staff and that was it. It was fun nonetheless!”

If money was no object, what would a Feed The Rhino stage show be like?

“We’ve always been a pretty stripped-back sort of band, but if money was no object we would definitely take the piss! Sod it! Flames, lasers… even bubbles! I’d say it would be a cross between Pink Floyd’s The Wall, The Rocky Horror Picture Show and a hint of Rammstein.”

TICKETS ARE AVAILABLE FROM WWW.CAMDENROCKSFESTIVAL.COM