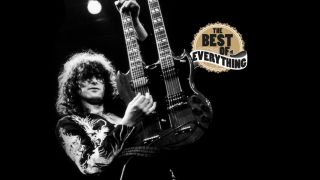 Guitarist Rich Robinson co-founded The Black Crowes with his brother Chris and drummer Steve Gorman in the late 80s.

The band released their debut album, $hake Your Money Maker in 1990 which went on to sell over five million copies. They released a further eight studio albums and four live collections before announcing their split earlier this year.

Robinson has three solo albums to his name. His latest, The Ceaseless Sight, was released in 2014.

We challenged him to pick the best 10 guitarists – until he suggested his own spin.

“I thought it would be cool to talk about guitar players who are unique unto themselves,” says Rich. “Sometimes you hear a guitar player, and you just know it’s them. I remember when The Black Crowes first played with Jimmy Page. He’d just kick in and we’d be like, ‘Damn! That’s him!’ That’s how it is…”

JIMMY PAGE
Rich: “Any time you hear that sound you know that it’s him: any time you hear him solo and the way that he digs in. It just goes to show that, really, it’s all in your fingers and how you turn your amp. I could plug into Jimmy’s amp – anyone could – and it’s not going to sound like Jimmy. That’s what was so cool as we [Rich and his brother and ex-Black Crowes bandmate Chris Robinson] grew up, was realising that and seeing it in all of our favourite musicians. If you’re really good, you have uniqueness to you. I think the ultimate goal for today’s musical standard is that everyone is trying to sound like someone else, more so. But I think it’s the unique people that really stand out.”

KEITH RICHARDS
“The next would be Keith Richards. Growing up and listening to Keith play, just his approach to the guitar and to rhythm playing was what set him apart. No one played like that. No one used those note choices, especially within the composition, and the way that he writes songs in particular. Then he has that tone, too. Sometimes it can be really sharp, like the biting sound when he plays his solos, but then he has this amazing rhythm and the timing with which he plays. And the note and the chord choices that he makes are unique to Keith.”

PAUL KOSSOFF
“He always played the same Les Paul guitar – it was like a ’58, or a ’59, flame top Les Paul. When you listen to Free playing Mr Big or Ride on Pony, or even All Right Now, you can hear that chord come in and his attack. You can really dig into the frequencies of how people when they strum the guitar create multiple frequencies and harmonics, and everyone has their specific signature style that you can really hear. One of the other guys I can really hear is Paul Kossoff. No one sounds like him.”

PETE TOWNSHEND
“I missed The Who growing up, really. It was cool and all, and there were certain songs that I loved, but it wasn’t until I got older and I started delving in that I really learned to appreciate Pete – especially the live at the Isle of Wight stuff. He had this beautiful and clean, but also huge and powerful sound. There was a tremendous amount of frequency coming off those huge amps that he had. And when he wanted it to kick in he would turn it up and hammer that Epiphone SG. It was unbelievable, and the way he would hit an A chord was so powerful. No one hit chords like that. I think chords and rhythm guitar players a lot of the time tend to get overlooked, but it’s the multiples of all those notes that are put together that create these worlds between worlds, and that’s what I’ve always been interested in. For me, sometimes just hitting a big ass A chord can be even more powerful than a solo. That’s what sends those shock waves through your system.”

NEIL YOUNG
“No one plays guitar like Neil Young. And it’s just this tiny little amp, and he’s got like three of them on stage. Luckily, I was able to tour with most of these guys with The Black Crowes, so I was able to watch them and see it up front. He would turn his little Fender up all the way, and his vibrato, note choices, and the way that he approaches the guitar is just totally unique. And the more he would dig in, the more the compression of that amp would come in. To me, he almost makes his guitar sound like a cello, because of the way that he would hit the notes in such a round way. And he covered so many styles. There were no boundaries with Neil, but whatever he played you knew from just one note that it was him.”

MALCOLM YOUNG
“The next one would be Malcolm Young – two Youngs in a row. I mean, fuck man, are you kidding? The first guitar I wanted growing up was an SG, because of Angus, and I can clearly remember Angus running all over the stage. As a kid you’re really drawn to that eye candy, but you listen to Malcolm back there just rocking out, and there’s no two ways about – he’s the man. And when the two of them would come in together that unison thing they had going on was like brotherly harmony, and there’s nothing like it. They were so tight and so powerful, but never overdriven or shitty sounding. It elucidated a visceral response from me when I first heard it. The big open chords sounded so fucking heavy.”

DUANE ALLMAN
“First of all, you can’t discount [The Allman Brothers Band guitarist] Dickey Betts at all. He’s an amazing player. But Duane had that fire, man. It’s like that little thing that you can’t quite put your finger on it. But he really raised the bar. He’d kick in with these solos that were very reminiscent of B.B. King and his favourite blues players, and he’d play a lot of open tunings. He was like Jimi Hendrix to the slide guitar. There’s slide guitar before Duane, and slide guitar after Duane. It was almost like night and day. Listening to that dude and the music that would come out of him - the musicality and tone, and the joy and all that stuff - just hits you right where it needs to hit you.”

GEORGE HARRISON
“A lot of people don’t talk about George, but you could put him in any context and you’d know that it was him. It’s glaringly loud and obvious when you listen to the Travelling Wilburys or All Things Must Pass [George Harrison’s triple solo album] and The Beatles, where he’d come in with these beautiful, simplistic, but long melodies. He wasn’t in a hurry, and that’s what I liked about him. It was almost like he was playing the sitar before he played the sitar, you know. His beautiful, wavering approach was something that I was always drawn to from early on. And I loved compositionally how he chose to write his solos – let alone his songs, but the solos in particular.”

J.J. CALE
“There’s some really cool footage on YouTube of J.J. playing with Leon Russell – that’s the one good thing about YouTube actually, is that you can look up anything. This guy wasn’t in a hurry either. And the rhythmic and tonal approach to the way that he played was subdued, yet it was really present. It was a very natural sounding, and there was nothing forced about it. He wasn’t trying to reach beyond his ability, but his ability was obviously great. So he just lived within this world with the most choice licks that he could play. The way he put all his music together, when I hear J.J. Cale I know immediately that it’s him.”

JIMI HENDRIX
“The last one is Jimi Hendrix. I’ve been a huge Hendrix fan since I was in sixth grade. What came off his guitar, you still don’t even know to this day what the hell he was doing. Almost from a metaphysical standpoint, just listening to it and the feeling that he inspired and what it drew out of you, it was unlike anything else - especially at the time. At the time he was doing all that stuff people were like, ‘What the fuck is that guy doing?’ Neil Young said he was just on another planet. And it’s true. It’s amazing to watch people who are able to take this one instrument and this relatively finite framework of music – because it’s the same six strings and it’s tuned the same way – and turn it into a language of their own, and take it to places that no one else could. A good writer can do the same thing; because words are just notes and everyone has their own patterns and favourite words that they go to. Everything has a tempo and a flow, and musically that’s what he did. And then he sang on top of it as well, and it was all part of the same instrument. It never felt like he slapped some vocals on top. Everything was just there.”