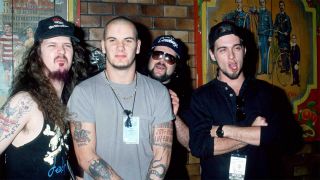 Everything's bigger in Texas, and Pantera are proof of that. One of the heaviest,  grooviest and most in-your-face metal bands of all time – a brutal mash of revved-up riffs from Dimebag, battering ram drums from Vinnie Paul, the walking basslines of Rex Brown and gnarled vocals from Philip Anselmo. A powerhouse and an inspiration to a generation of bands in the 21st century, few can come close to the ambition and aggression of Pantera.

Here are ten of their greatest songs (we don't include the glam metal years).

A full on display of fury. Right in your face; it’s the tale of a young metal band from Texas taking on the world. And it has a guitar groove from Dimebag that not only shreds hard and heavy, but also has the type of grade few others could hope to match. With this one song, the Pantera sound was cemented.

An anthem that might have a thrash mentality, but goes way beyond what you could achieve by sticking rigidly in this genre. At once the band prove they could be melodic, nasty and musically simple but creative. It’s all built around some breathtaking guitar work from Dimebag. He fires and pounds, and never sits back to milk the adulation.

To call this, as some have done, a power ballad is to underestimate what’s being routed here. This is an astonishingly dark parable of a suicide solution that’s not the answer. It’s a lament, with the guitar part emphasising that sometimes the space left between notes gives the performance credence. The affirmation of an all time great.

The positive side of hate, on a song that understands anger needs a channel to come to rightful fruition. While on the surface, it’s snarling, gnashing and biting, if you listen carefully, there’s an underlying sense of vulnerability. Few others could have convincingly delivered such opposing textures.

Not only perhaps Pantera’s most recognisable intro, but one that stands among the most identifiable of any metal beginning. The first second gives the song away. It’s a riffing headbutt that opens up a gaping wound, allowing Anselmo to charge through the viscera. This is one of the those Pantera high spots when you appreciate how Dimebag and Anselmo worked as a team.

Another song that looks deeper at the causes of attitude, and says society is too rigid, creating pathological turbulence. Dimebag’s guitar shots generates an almost staccato agitation. It careers headlong, bursting into a pummelling polemic, but as with everything he did, it’s less about guitar heroics, more about shading in the song.

This is based on a threatened confrontation between Anselmo and a fan’s dad. It’s lyrically no holds barred, but what the guitar does is back up the emotions expressed by the vocals, yet also offers another avenue of thought. There’s almost a funky groove to that takes the piss out of the whole incident. It adds humour to the pugilistic spice.

An example of how things could work in Dime World. He cut into a spontaneous riff during a soundcheck, suffering from a huge hangover. And it inspires the rest of the band to take it forward. The riff actually has the stench of a hangover cure, and smells of tobacco, weed and booze – the essence of a classic riff.

Daring to take on a Black Sabbath classic is brave yet foolhardy. Pantera, though, do exactly that here, and successfully transcend the legend of the original. Of course, they are respectful to what Sabbath had done, but take it as a blueprint rather than an imprint. It makes you appreciate why Tony Iommi holds Dimebag in such esteem.

One of Dimebag’s most popular solos turns this into a monster. It’s an idea he’d had for several years, before finally getting the chance to bring it into form. This is a lot more orchestral than most of Pantera's work, and the way Rex Brown complements the guitar on bass adds to the impact. It underlines the band were about more than The Shred.