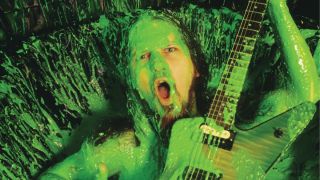 Everyone who met Dimebag Darrell has a story about him. Some of these involve great memories, some involve altogether hazier ones. But all of them involve copious amounts of alcohol and a head that felt like it had a Texas chain gang working on it the next morning. Here’s Dime’s longtime friend and Black Label Society guitarist Zakk Wylde on a typical night out, for instance: “I remember being in a bar with him, and everyone’s drinking, cracking the fuck up, having a good time. He’s got this one guy absolutely fucking hammered. Dime’s like, ‘Come on! Come on!’ This guy was smashed out of his mind. Then someone goes, ‘Dime! What are you fuckin’ doin’? Joey’s been sober for six years, you asshole!’ Dime’s like, ‘Oh shit… fuck it, come on!’”

Dimebag Darrell wasn’t just a Guitar Hero. He was a Party Hero. A connoisseur of booze-fuelled carnage. A man who could conduct a room like an orchestra, his baton a bottle of Crown Royal whiskey.

“He was the life and soul of the party,” says Alice In Chains guitarist Jerry Cantrell, who first met Dime when they were both living in Texas in the mid-80s, long before either became famous. “I used to dig that at the shows he would have a whole tray of cups with a splash of Crown and a dash of Coke. He would throw them out into the fuckin’ audience ass first so if someone caught it, there would still be plenty left at the bottom of the cup.”

It wasn’t just booze that drove Dime in his search for a good time. His friends say that he was a fully qualified practical joker. “One time, I had to fly to New York and I left my car with a mutual friend,” recalls Jerry. “Dime convinced my buddy to give it to him. He put decals on it, put a cop siren inside, horns on the front – I don’t know how many thousands of dollars he spent. When I got back, I saw the car and I was pissed. I tore out of there, beads all over the place, flames on the steering wheel, the cop light going. I started laughing out loud, saying, ‘You fucking asshole, you got me.’”

It wasn’t just booze, of course. It was just mainly booze. “I always remember the Black Tooth Grin,” laughs Jerry. “I had kind of burnt out on that and moved on to other things. But I’d be around Dime and he’d say, ‘C’mon, Black Tooth!’ He’d always say, ‘Drink it or wear it.’ That was the deal when he was ready to go and he’d poured a drink for you: ‘Drink it or wear it.’”

“If you put the Rat Pack into one human being, that’s Dime,” adds Zakk. “He was Frank Sinatra, he was Dean Martin, he was Joey Bishop, all those guys. If the Rat Pack was around, then you weren’t gonna have a bad time.”

Sometimes, his associates got their own back. It didn’t happen often, but when it did, it was sweet revenge.

“Dime was relentless,” says Satyricon frontman Satyr, whose band supported Pantera in 2000. “I was terribly hungover from a night of his bourbon madness, and I told him that there was no drinking today. He got upset. I said, ‘I’ll do a whiskey shot if you smoke a cigarette.’ I don’t think he’d ever smoked one, and he said, ‘No way!’ Philip [Anselmo] said, ‘Why not? If you want him to drink, why can’t you smoke?’ So he tried it and got really nauseous. He was whining and coughing. That was fun.”

But mostly, Dime was the Commander-In-Chief of Chaos. His heroic consumption of booze combined with a superhuman generosity insured he was the party. Even so, every one of his friends insists that the drinking never got in the way of the show.

“I’ve been with him where he’d wake up the next day trembling,” says Zakk. “He’d always brush his teeth and wash his mouth out with mouthwash – he’d say, ‘You gotta have fresh breath, man!’ – and then he’d find another bottle of Crown Royal. But you never saw him wasted onstage. You’d be looking at him, going, ‘He’s got to feel like prison ass,’ but he’d have a couple of cocktails and then it was showtime.”

Nor does it seem like the guitarist was ever stricken by an attack of conscience over his behaviour. And he certainly wasn’t ready to mellow out.

“I’d say most of the time he was on, but I saw him turn it off,” reveals Jerry. “You can’t run at that speed all the time, but he tried. We all tried. Let’s put it this way: it wasn’t anything different, just the volume might be turned down.”

“He was a beautiful soul, man,” says Zakk. “He embodied a love of life. Every night was Friday night. No matter how bummed out you’d be, he was a ray of sunshine when he walked into the room. Like, ‘What are you all sad about? Why don’t you just cheer the fuck up?’”

“So Machine Head are playing in Kalamazoo, Michigan, as main support to Pantera on their 101 _Live Proof _tour. After the show we’re partying and hanging out and we’re all in the back parking lot of the venue. I’ve got a bunch of quarter-sticks of dynamite and we’re blowing up garbage cans and we’re all drinking. Dime and his roadie are running around with two gallons of Seagram’s Gin and his roadie has two litres of Sprite, and they’re running up randomly behind people, grabbing them by the head and sticking the Seagram’s into their mouths, and then the other guy would pour in some Sprite in. It was a surprise attack shot!

“Everyone’s getting super-wasted, but eventually I thought, ‘Alright, big show tomorrow, I’ve got to get some rest,’ so I retire and wake up at about 5.30am. Dimebag is still up and on top of a Volkswagen Beetle, doing back flops onto the roof of this car, but that wasn’t that unusual, so I went back to bed. The next day, Pantera’s crew run up to me and shout, ‘If you give Dimebag a fuckin’ drop of alcohol, you’re off the fucking tour!’ He hadn’t stopped drinking all night! The band were furious, really pissed off, so I’m like, ‘Holy shit!’

“So the opening band goes onstage, and suddenly Dimebag walks on, and he’s standing there drunk and headbanging, and of course the crowd goes crazy. Then he stumbles over to my guitars, puts on my back-up guitar, walks back out onstage and slams it, SMASH, down on the floor, and breaks the neck in half. I’m like, ‘Dude! What the fuck!’ So we go on stage later and the show goes fine, but we’re wondering what’s going to happen with Dime. Now, this dude is fucking wasted. He hasn’t stopped drinking for 24 hours straight and he hasn’t been to bed. But then, Pantera come onstage, and if I hadn’t seen it with my own eyes, I would never have believed it. The guy played note-for-note perfect. He did not miss a fucking riff and all the solos were perfect! It was like watching a movie, the thing that couldn’t possibly happen.

“So the next day, Dime is walking off his bus with a giant bottle of baby diarrhoea medicine that they used to drink to rehydrate after big drinking sessions. I said, ‘Hey man, don’t suppose you remember anything about what you did to my guitar last night?’ and he was like, ‘Er, refresh my memory?’ I told him and he was so sorry he gave me a brand new guitar – a Washburn, his very first signature series! He gave me this brand new, prototype, one-of-a-kind guitar. That was fucking awesome. But that’s the kind of dude he was, man. He was one in a million!”