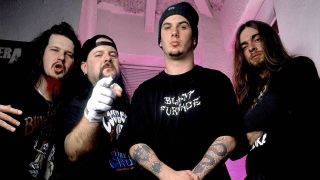 There aren’t many more fertile breeding grounds for music on Earth than the state of Texas. And while there are many different styles and genres that have thrived there, rock and metal has arguably been the dominant force. Whether it’s thrash, alt-rock or hardcore punk, Texas is responsible for some of the best music around… and Bowling For Soup. Enough about them though, here we present ten of the finest bands from Texas.

Might as well start with the most obvious choice. If you were to compile a top ten list of any bands, from anywhere, ever, there’s a pretty strong chance that Pantera would feature. What is there to say about their mix of thrash, Southern rock, groove and extreme metal that hasn’t already been said? Very little, and with good reason, but just in case it needs hammering home again; without Phillip Anselmo, Vinnie Paul, Rex Brown and the incomparable Dimebag Darrell, the metal scene would be a much less rich interesting place.

Although they quickly moved to San Francisco, and are currently based in Portland, Millions Of Dead Cops were born in Austin, Texas. They remain one of the most important and shockingly controversial bands from the early years of American hardcore. They play typically short and warp-speed punk, but with openly gay frontman Dave Dictor’s lyrics supporting his militant anti-capitalist, pro-transgender and far left socio-political opinions. Add that to their name, EP titles like John Wayne Was A Nazi, and a reputation of live shows breaking into violent stand-offs, you’ve got one of the most ground-breaking bands in hardcore.

John Congleton is a deeply disturbed man, and as frontman of The PAper ChAse he has spent a career making some of the most unsettling albums in rock music. TPC meld alt-rock, noise and avant-garde experimentation to devastating effect, while Congleton delivers lyrics that read like the diary of a serial killer. Any of their albums are worth investigating if you’re up for looking directly into a man’s pitch black heart, but 2002’s Hide The Kitchen Knives is particularly twisted.

Often citiedas one of the most important exponents of crossover thrash, Houston’s D.R.I. (Dirty Rotten Imbeciles) have managed to survive for 34 years, which is no mean feat for a group dealing in ultra-savage hardcore punk and some of the finest thrash riffs in the game. They also have the iconic Kurt Brecht on vocals, who continues to release incredible music with his other band Pasadena Napalm Division.

One of the more typically Texan sounding bands on the list, The Sword were hand-picked by Metallica to open for them in 2008 and have since played some of the biggest festival and arena stages on Earth – all thanks the almighty power of the riff. If the Freya EP in 2005 made fans of heavy, stoner rock sit up and take notice, then debut album Age Of Winters turned them into one of the hottest bands in the world. It’s a modern classic, and if you like the idea of a Texan-tinged Sabbath, then it’s a record you need right now.

The band that came from the minds of Gibby Haynes and Paul Leary in San Antonio are one of the most unusual bands in history. Butthole Surfers transcended their place in the hardcore punk scene of the 1980’s, using psychedelic rock, mind-bending visuals, black comedy and just downright weirdness to fry the minds of their audience. And, somewhat surprisingly, they became a gold-selling rock act that were briefly, nearly, MTV darlings after the mainstream success of 1996’s ElectricLarryland. It’s still one of music’s most bizarre occurrences.

One band that could not be further from the stereotype of the typical Texan band, Absu have been around since 1989 and have never stopped pushing their own sonic envelope into more and more extreme areas. Starting life as a run-of-the-mill thrash metal band before incorporating elements of early death and black metal, Absu have since taken on Celtic mythology and progressive elements – most noticeably on their 2001 conceptual masterpiece Tara.

For a brief moment at the turn of the Millennium, it seemed that the music world was going to belong to five young punks from El Paso. It didn’t, but that says more about the approach and the distain for mainstream music of At The Drive-In than it does about the songs they created. 1998’s In.Casino.Out. was an exceptional effort from an unknown band that saw ATDI sign to Beastie Boy Mike D’s Grand Royal label and rope in super-producer of the day Ross Robinson to chair 2000’s Relationship Of Command. The rest is the stuff of legend: one of the greatest albums in post-hardcore, the wildly chaotic live shows, the band’s fracturing and split only a year after its release… It was brief, but when At The Drive-In were here they were the best band on the planet.

It may not be nice, it may not be pretty, it may not be very original, but there is something deeply satisfying about the sickening death metal of Dallas’ Devourment. They have had a pretty rough time of it, with the band splitting up and reforming on numerous occasions (with so many musicians passing through that it makes Guns N’ Roses seem stable), but that hasn’t stopped them from being one of the strongest proponents of slam death metal. Plus you can’t fuck with the artwork from 1999’s debut album Molesting The Decapitated. Dirty buggers.

They were Metal Hammer’s first ever cover stars, so it seems only right that we doff our cap to the boogie blues, rock ‘n’ roll masters that are Houston’s finest; ZZ Top. They’ve been at it as long as Black Sabbath, have one of the greatest back catalogues in the history of music and… well, let’s be honest here, even to this day they still look SO FUCKING COOL! They aren’t the heaviest band on this list, but they are the most iconic. Whack on Tres Hombres and try and disagree with us!

10 of the best metal bands from California

10 of the best metal bands from Ireland