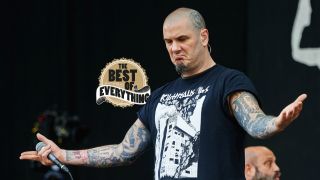 The world needs another Pantera. They were dangerous and unpredictable, but always could back it up with their music. By the mid ‘90s, Phil Anselmo became the archetypal metal frontman. He’s always delivered his vocals so aggressively, he’s written some great lyrics and he’s the same guy onstage as you see offstage. Just look at what he’s done in his career: from Pantera to Down to Superjoint Ritual - you just can’t argue with that…

5 MINUTES ALONE (Pantera, Far Beyond Driven, 1994) It’s one song I wish that I’d written. It’s quite a simple song but the way Phil delivered his vocals here was perfect. It’s brutal, and the back story is great. Apparently, some kid’s dad said he’d like five minutes alone with “that Phil Anselmo” after his kid got injured at a Pantera concert. I mean, why would you want to pick a fight with Phil? No, thanks.

NEW ORLEANS IS A DYING WHORE (Down, Down II: A Bustle in Your Hedgerow…, 2002) The title of this song says it all: dirty, ugly and gritty. Phil sounds as pissed off as possible throughout it all. The lyrics are killer; it’s just a great, heavy song – one of my favourites by Down.

THIS LOVE (Pantera, Vulgar Display of Power, 1992) I love that song has two distinct feels. There’s the dark, eerie bit – and when the heaviness comes in, it sounds all the more heavy. I think without Phil, it’s a really dark and creepy song, but his vocals here suit the mood really well. It took me years to really appreciate that song. But once it clicked, I just loved it.

BURY ME IN SMOKE (Down, NOLA, 1995) One of the best song titles ever. I wish I had that as one of our own! I remember when Down did their comeback at Download 2006. Before they played this song, Anselmo said something like, ‘I’m sick of people just standing there and staring at me. Don’t stare at me unless you wanna fight’ and you could just feel 100,000 pairs of eyes staring at the floor. Six or seven years later, Hang The Bastard were meant to go out and jam that some song with them, but we didn’t realise it. So some other bunch of guys just went out and took advantage of our ignorance – which is a bit gutting! This is just such a powerful song.

SUICIDE NOTE, PT. 2 (Pantera, The Great Southern Trendkill, 1996) It took me a while to get into The Great Southern Trendkill, but once I did, I really respected it as an album. It just clicked one day and it’s fantastic. Suicide Note, Pt 2 is such a brutal and relentless song. And on this recording, Phil does that thing that no one else can do – he just sounds so angry. Those long screams… I can’t even explain how they sound, but they just encapsulate what is so great about Phil Anselmo.

FUCK YOUR ENEMY (Superjoint Ritual, Use Once and Destroy, 2002) With that title, I think you know what’s coming. It’s a short song that pulls no punches. I remember picking up the album in… 2002? That’s depressing. I bunked off of school and went to a CD Warehouse to get the album, and that song just opens up the whole world of Superjoint Ritual. Not enough people checked that band out – if you haven’t, I think you should.

CEMETERY GATES (Pantera, Cowboys From Hell, 1990) I know it’s cheesy, but I just wanted to pick a few songs where you can actually hear Phil sing. Because, as I said before, he really can sing. Cemetery Gates is just a really cool song. He only had that voice for a few years but when he did it was certainly something to hear.

HAIL THE LEAF (Down, NOLA, 1995) This was the very first Down song I heard. A lad in school made me a tape and this was on it. I think Phil sounds amazing on it, the whole album is amazing, isn’t it? The moment where the song just builds, then breaks down is one of my favourite moments in music. It just sounds so heavy. I remember seeing them do this at Download 2013, and when it dropped, seeing all these old dudes kick off was one of the greatest things I’ve ever seen!

HARD LINES SUNKEN CHEEKS (Pantera, Far Beyond Driven, 1994) It’s got a really slow intro, but when it drops it gets really heavy. When I was young, it blew me away. There’s a lyric in there that I asked him about, I thought he said, ‘I took Madonna’s breath away‘ and he said, ‘Why would I talk about taking Madonna’s breath away? It’s ‘I took your daughter’s breath away’…’ This is a great song, especially the bits where it really slows down and he’s mumbling through it – but it made me look like a bit of an idiot.

FUCKING HOSTILE (Pantera, Vulgar Display Of Power, 1992) Short, brutal, powerful. When I first heard this as a kid, I was actually scared that my parents might walk in and hear me listening to something like this. It would have been trouble… I got over that pretty quick. But it’s so aggressive, I wish I’d been the age I am now in ‘92 to hear it when it first came out. I wish we had a band like this doing that now. It’s such a shame to hear this guy spitting, screaming and snarling with such intensity – we’ll never hear the like again…

Joe Nally was talking to Stephen Hill. Hang The Bastard’s album, Sex In The Seventh Circle, is out now through Century Media.