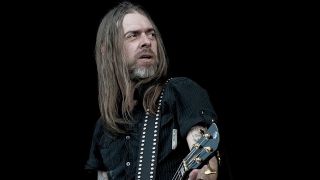 What was the general feeling in the Pantera camp when the 90s dawned?

“One word: indestructible. It was us against the world and we gave everyone the big middle finger. A lot of people didn’t know what to think of us when Cowboys From Hell came out [in 1990], but then we did 338 days on the road, took three weeks off and went into the studio and started making Vulgar… That was just a fuckin’ mindblowing experience. All these riffs coming out of us… man, it was insane. I listened to it and thought, ‘Holy shit, what have we done?’”

Did its success take you by surprise?

“We knew it was possible. But it was our lifelong dream and it was all coming true. When the money started flying out of the trees, we didn’t know what to do. It was like, ‘OK, I’d better go and buy a house or something… ha ha ha!’”

What did you do in your downtime?

“I played a lot of golf. We toured a lot with Ozzy and it was always one day on, one day off. You’re bored as fuck out there, so I’d go golfing during the day and then I’d come back and I’d cook out for the whole crew. We were also very thirsty beasts in those days!”

“Oh man, I don’t drink anymore but back then it was crazy. I don’t know how we fuckin’ did it. Dime was sometimes up for a couple of days straight. Those were some of his best performances, believe it or not. He’d play off the cuff. I thought he couldn’t fuckin’ stand up, but he’d get up and play his ass off. We were a very functioning alcoholic band.”

What was the high point of the 90s for you?

“Oh, man, just the fuckin’ chemistry between us. I’ll never experience anything like that again.”

And the low point?

“Philip’s overdose shook everybody up pretty good. It was just a mistake that happened but it opened up a lot of eyes, and from there I just felt bad for him, because there were so many eyes watching all the time. The guy was in pain.”

What album sums up the 90s for you?

“On a personal level I would have to say Vulgar Display Of Power, because nothing else comes close to that. I don’t remember what I was listening to back then, if I’m totally honest. It becomes a big fuckin’ blur. But I do think that Soundgarden’s Badmotorfinger was a killer record and we certainly jammed that a good few times on the bus. Facelift, the first Alice In Chains album, was fuckin’ great, too.”

On the frontlines: Anthrax's Scott Ian remembers the 90s