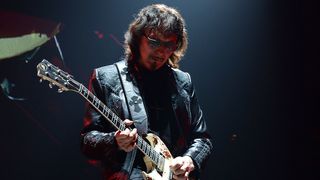 It’s long been said that Dave Grohl is the nicest guy in rock, which is hard to argue with, but it’s safe to say that Tony Iommi is the nicest guy in metal. Full stop, no arguing. Anyone who has ever met the Riff Lord will attest that he’s a gentleman and one of the most accommodating people to ever pick up a guitar.

Today is no different.

Basing himself in Central London’s swanky Hospital Club, the Black Sabbath founder is spending his day talking to gurning idiots like us about the upcoming cinema release of The End Of The End, a film which documents his band’s final ever show at Birmingham’s Genting Arena. Well, it had to be Birmingham didn’t it?

“It’s where we all started,” says Tony, stirring his coffee, reflecting on the past five decades. “I did push for [the tour] to finish there because it’d be quite easy to finish in America and that would be it, but it had to be there.”

Birmingham is woven into the DNA of Black Sabbath. The dark, bleak overtones of the music aren’t an artificial construct to scare would-be listeners, it’s the result of growing up in the colourless Iron City, offering very little hope or reasons to rejoice.

Growing up in Aston, alongside his Sabbath brothers, Tony admits it was a rough area.

“The particular area we all lived in was not very nice, really. There were some nice people around, but there was a lot of gangs and things like that – it was a bit depressing. Being able to play music really lifted us from what we were involved in where we lived. I think it also had an influence on what came out of [us] because it was aggressive music.”

Black Sabbath’s self-titled debut album was released in 1970 and came as an antidote to the ‘60s summer of love and flower power hippy nonsense. Coming as perhaps the wake-up call the world needed, Sabbath tackled real-world issues like the horrors of war. But they also made references to the occult and black magic (notably on the song Black Sabbath itself), which soon became their calling card. For better or worse.

“We had witches, occultists and god-knows-what-else approaching us. It got a bit worrying at first, especially in America because they were quite heavy on that sort of stuff. And then of course all the churches started against us – it got a bit hairy at times. They tried to ban us from this and that and the other.

“I remember three witches came to the show and saw that we had three crosses the right way up and they left,” laughs Tony, recounting various altercations with fanatics over the years.

“We had another lot that came to our hotel. After we played this show and went back to the hotel, all these people were sitting outside the doors of our rooms, chanting with candles. We thought ‘What the hell’s going here?’ so we climbed over them and went into our rooms, with these people are still outside. We thought ‘What are we going to do about this?’ because in them days we didn’t have security guards. We decided to go out there in precisely a minute, open the door, blow the candles out and sing happy birthday to them! Which we did and they promptly left.”

Stories like this are gold for fans and journalists alike, not least because you just don’t get this sort of behaviour any more. But in the early days an anecdote wasn’t enough to get the inventors of heavy metal noticed, let alone receive any positive press. The recently re-released book Ten Year War documents the band’s struggles with the press in the ‘70s, proudly stating that they received ‘More good press than most, more bad press than any,’ with the infamous Rolling Stone review of their debut album declaring Sabbath as just like Cream but worse.

“We had a hard time with everything,” remembers Tony of the music press. “A lot of people didn’t give the chance to listen to what the songs were about. For many years, people tried to put us down. The press just didn’t understand it.”

But then, with the release of runaway hit single Paranoid, the press had to take notice. The single reached number two in the official charts, leading to Black Sabbath being invited on musical TV institution Top Of The Pops, which Iommi was initially against.

“Tony Blackburn – who hated us and wouldn’t play our records – had to introduce us,” he laughs. “We started attracting all these different people, all these screaming girls and stuff, which we weren’t about. When we were doing shows there were all these teenage girls up front who had no idea what we were really about, they just knew Paranoid.

“These people come and go, but our fans are true fans – they have belief in what you did and liked what you did. They weren’t there for the minute and gone, they stuck with us and we’ve got fans now from the very early days when we started.”

Despite Black Sabbath inventing the genre that came to be known as heavy metal, they’ve never been that accepted by the mainstream. Bands like Maiden and Metallica have gone on to sell far more records, but you’ll still hear Paranoid on adverts and Iron Man used in the movie of the same – you’ll even hear War Pigs in the odd historical epic. Tony mentions that he received an email from Jethro Tull’s Ian Anderson just the other day, saying that Ian’s friend had both War Pigs and Paranoid on the radio list for troops during the Vietnam war.

These songs are some of the biggest songs in Sabbath’s repertoire and receive a deafening response in The End Of The End, alongside everything else. It’s a veritable greatest hits set from the Birmingham masters, with everything from Fairies Wear Boots to Behind The Wall Of Sleep belting out across the arena in the ears of the heavy metal hordes.

Were there any songs you wanted to play that didn’t make the setlist?

“There were a lot of songs we didn’t play that we’d all liked to have done. In fact, when we first put the list together, even before this last tour, we tried doing some more songs we hadn’t done for a long time. We got them musically but it was a struggle for Ozzy because when he did those songs it was 40-odd years ago, and you can’t expect him to still sing that high.

“He always wants to reproduce it like it was, he won’t duck and dive in the song like a lot of people do, so he was blowing his voice out by trying to do it. We had to come up with a set that we knew he was going to be comfortable with, so we end up doing the classic songs.”

A few days after the final show, Tony, Geezer and Ozzy headed to Angelic Studios in Oxfordshire to spend a few hours, playing through tracks that didn’t make it into the set to be included in The End Of The End. A blistering version of The Wizard and an emotional rendition of Changes prove just how versatile and powerful Sabbath’s sound really is, and that there’s more to them than chunky riffs and wailing vocals.

As our time draws to a close, there’s one question looming in the air – what do you do now? Having spent the past 49 years as a cog in the Sabbath machine, the mechanism now nearing an end. Ozzy is out on tour with his solo material, but what about the guitar god?

“I’ll be partying every night, of course!” he laughs, before admitting that he hasn’t actually made a plan yet.

“There’s a lot of things on offer at the moment, I’m almost bombarded with things, but I’ve got to see where I’m at and what I want to do. I’d like to get a bit of time to start writing again, not for any particular thing, but just to start writing and putting some ideas down. That’s probably what I’ll do.

“I’ve been offered TV stuff and offers to play with other bands at big occasions, but I can’t decide on anything yet. I’ve not been able to get my head into a different space yet, I’m still in the Sabbath mode and the more you talk about it the more you’re in that mode.”

There probably won’t be a time where Tony isn’t talking about Sabbath to superfans like us, but as we pose for the obligatory photo, it’s heartening to know that this isn’t the last we’ll see of him. Whether Sabbath play more shows remains to be seen, but you can never say die.

Black Sabbath: The End Of The End is in cinemas worldwide for one night only on September 28. Tickets are available now.