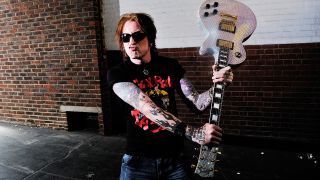 After grunge peaked in the early 90s, a gap opened in the market - one that was rapidly filled by a disparate bunch of rock bands whose only common denominator was that they were British. Twenty years after the movement that was christened Britrock exploded into the mainstream, we look back on the finest albums that the scene had to offer.

Earth Vs The Wildhearts (EastWest, 1993)

How To Make Friends And Influence People (Total Vegas/EMI, 1994)

Raised on Kiss, AC/DC, Elton John and The Beatles, Bradford’s Terrorvision were viewed as the relentlessly chipper, slightly daft face of Britrock; a shiny-trousered Slade for the 1990s. Endlessly patronised by the London media, and always much smarter than they let on, on their second album the quartet delivered a succession of killer singles (Oblivion, Pretend Best Friend, Alice, What’s The Matter) and became Britrock’s definitive festival entertainers.

A million-selling album which transported “three chubby hicks from the sticks”, as Therapy? frontman Andy Cairns once described his band, into rock’s premier league, Troublegum plays out like a teenage diary from hell, with Cairns rendering the frustrations of small-town adolescents in blackened punk-metal nuggets. Featuring five Top 40 singles (Screamager, Turn, Nowhere, Trigger Inside, Die Laughing), the album convinced A&M Records that they had the European Metallica on their hands; its doomy, arty follow-up Infernal Love swiftly disabused them of this notion.

Paranoid and Sunburnt (One Little Indian, 1995)

In the ‘provincial white boys with guitars’ Britrock club, Skunk Anansie stood out like a drum solo at a Ramones gig. Fronted by the switchblade-sharp, fearless and charismatic, Brixton-born Skin, the London quartet announced their arrival with 1994’s explosive Little Baby Swastikkka before delivering a striking debut album, showcasing Skin’s exceptional vocals amid taut punk/funk/metal songs. Lemmy, an early champion of the band, remains their number-one fan.

Young, good-looking, cocky and blessed with top-grade management, a major-label record deal and a raft of brilliantly infectious, sussed, diamond-hard pop-rock songs, it’s a mystery why Baby Chaos never truly fulfilled their potential. Labelmates of The Wildhearts (whose frontman Ginger has encouraged their recent comeback), the Glasgow quartet toured relentlessly, were press favourites, and with Love Your Self Abuse delivered one of the best British rock albums of the decade… and still no one cared. It’s a shit business.

Dublin-born but based in north London, Compulsion were always a little bit too smart, too awkward and too self-aware to throw themselves wholly into the hedonistic whirl of Britrock. The Future Is Medium, their second album (the follow-up to 1994’s Comforter) was a fiercely intelligent, acerbic state-of-the-nation address, wrapping frontman Josephmary’s scathing, sarcastic lyrics in the sunniest pop melodies. Guitarist Garrett Lee has since become a superstar producer for the likes of U2 and R.E.M.

Babies of the Britrock scene, Downpatrick teenagers Ash were still in high school when they began notching their first Top 40 hits. Formerly a metal band called Vietnam, the trio were turned on to alternative rock by Nirvana, and while frontman Tim Wheeler possessed none of Kurt Cobain’s existential angst his band’s pop-punk anthems mined Cobain’s sense of melody. Featuring five hit singles (Girl From Mars, Kung Fu, Angel Interceptor, Goldfinger, Oh Yeah), 1977 was the first of the band’s two UK No.1 albums.

Thanks to the patronage of TFI Friday host (and Radio 1 DJ) Chris Evans, Reef were arguably Britrock’s biggest household name. West Country boys who took their musical cues from Zeppelin and Free, and had zero interest in chumming around with their Britrock peers, Reef were introduced to the world via a Sony Mini-Disc advert (featuring their track Naked) but hit commercial paydirt with this, their funky, hard-rocking George Darkoulis-produced second album, which featured the monster single Place Your Hands.

Creation Records boss Alan McGee, a man with a fabulous gift for hyperbole, once bracketed his new signings 3 Colours Red alongside Oasis as “the most exciting British rock bands since the Sex Pistols.” They weren’t, obviously. But before dreamboat singer Pete Vukovic succumbed to starry-eyed notions of becoming Britrock’s own Richard Ashcroft, the band he formed with guitarist Chris McCormack were one of the most engaging on the Britrock circuit. Pure, their debut album, threw up five Top 40 singles and remains a masterclass in punk-metal melodicism.

Initially touted as the UK’s answer to the Smashing Pumpkins, Feeder emerged at the tail-end of Britrock and became standard-bearers for British guitar music well into the next decade. Though their biggest commercial success came with 2002’s stately, half-million-selling Comfort In Sound (written in the wake of drummer Jon Lee’s suicide), their debut album – Metal Hammer magazine’s Album Of 1997 – remains their most charming, full of sweeping, roaring guitars and watertight choruses.

The Wildhearts, Reef and Terrorvision to tour UK

Ash: The Kids Are Alright!