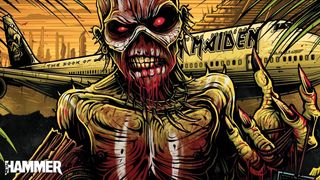 In a world exclusive, Metal Hammer invites you on board Ed Force One to spend 120 hours in the belly of the beast.

Check out the special collector’s cover from Star Wars illustrator Dan Mumford. You won’t see this anywhere else in the world. Get your copy of the magazine here.

Metal Hammer headed out to Mexico for three shows and 120 crazy hours of metal that only the mighty Iron Maiden could provide. With Bruce Dickinson piloting the band, crew and Hammer across the country, we give you unrivalled and unseen access to the new plane and new stage show with exclusive insights from the band themselves on everything from their bonkers fans to Bruce’s health to the material. We have it all!

We’re also giving away these exclusive Ed Force One decals so you can turn your car, bike, boat, helicopter, unicycle, roller skates, pogo stick and everything else into your very own Maiden transport!

We also talk to Deftones about their new album Gore and the turmoil surrounding the album – from frictions within to postponing their biggest UK show in a decade. Dig deep inside the psyche of a band that are no strangers to the struggle and find out why bust-ups are have become part of the Deftones process.

What’s it like being the face one of the most ridiculous, glamorous and notorious hair metal bands in the world? Well, let’s ask the man himself! We talk to Steel Panther’s Michael Starr about his messiest nights out, his childhood dreams, American football and his love of Steve Tyler. And would he rather give up drugs or sex?

Following the recent Phil Anselmo controversy, we investigate the question a lot of fans are wondering but too afraid to ask out loud – does metal have a problem with race? Is our world as inclusive as it claims to be or is there something sinister lurking inside? We talk to bands and metalheads alike to find out if metal does have an issue with race, and what it means for the place we call home.

Ministry’s Al Jourgensen is no stranger to drugs – his new band Surgical Meth Machine is named after them – but after spending 18 years as a bona fide junkie he’s living an (almost) clean life. But what did he learn in his former incarnation as a snorting, smoking, injecting maniac? We reveal Al’s Guide To Drugs from his own experiences with everything from alcohol to acid to heroin.

From one dangerous obsession to another, we find out why New Years Day’s fiery frontwoman loves the antichrist superstar Marilyn Manson. Just look at this kickass illustration to go with it!

And we’ve got features and interviews with Heck, Zakk Wylde, Rolo Tomassi, Walls Of Jericho, Testament, Chthonic, Blood Ceremony and a lot more.

Plus a free 15-track CD celebrating the hottest names in desert rock and two massive posters from Asking Alexandria and Babymetal!

Read Metal Hammer the way you want. Instantly read the articles from issue 282 of Metal Hammer and dive into the back issues right now on TeamRock+. Experience the interactive digital edition for your iPhone and iPad or Android device.

Or pick up a REAL PHYSICAL COPY HERE!