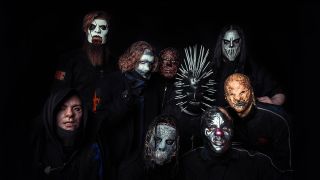 The wait is over: Slipknot's new album, We Are Not Your Kind, is here.

It's been five years since we last had an album from the Iowan wrecking machine, and plenty has happened in that time. Most notably, we saw the departure of long-time percussionist Chris Fehn, who left Slipknot under a cloud of legal claims and law suits. "Evolution in all things is a necessary part of this life," the band wrote of his exit.

Never has that ethos been clearer than on album number six.

Vocalist Corey Taylor promised that the new album would be "Iowa levels of heavy" while teasing new material, and he's delivered on that claim. But it's also so much more. We Are Not Your Kind manages to pull together everything Slipknot have excelled in previously, while pushing into new ground entirely. There's the trademark stomping riffs and irresistible grooves, but there's also forays into delicate avant garde experimentalism and cinematic introspection.

It's a description that makes perfect sense. As the new singles were released, each served as an intriguing marker in Slipknot's progression, dropping clues about their development as artists and musicians as they went. Evolution in all things is a necessary part of this life, after all.

"It’s us at our most ambitious, our most experimental," Taylor told us. "It's us doing what we fucking do best, which is basically when everybody thinks they’ve got us figured out, we just smack them in the face with everything we’ve got."

Here, we go through each song on We Are Not Your Kind one track at a time.

Ever since 742617000027 provided our glitchy, sample-laden introduction to Slipknot, the industrial, throaty chaos of (515) lead us into Iowa, or even the looped distortion and radio static of .Execute. ushered us into All Hope Is Gone, Slipknot's obscure opening gambits have come to play an essential role in setting up their albums as a whole.

Insert Coin is no different. Stabbing electronics give way to tactile, expansive noisescapes and sweeping waves of sound. 'I'm counting all the killers,' sings Taylor, before his voice dissolves into a distorted, looped mess.

It's unusual, it's disarming, and it's unlike much we've heard from Slipknot before. And so the rest of the album follows.

The first single Slipknot released from We Are Not Your Kind (All Out Life came first, but mysteriously didn't make it onto the final tracklist) this track came with a video that introduced their new masks for the very first time – and caused the internet to go into meltdown as a result.

Those creepy church bells, that siren-like guitar, and the operatic vocals send shivers down the spine before it goes All Out Slipknot.

Their workmanlike percussion is sped up to 11, Corey’s throat-shredding vocals are on point and hooks such as ‘I didn’t come so far to sink so low’ are made to sing out loud. It already felt like a staple of their back catalogue when they played it at Download Festival earlier this year.

Birth Of The Cruel

Opening with a sinister, industrialised drum loop, Birth Of The Cruel quickly kicks into a guitar line that sounds like it was taken straight out of a John Carpenter soundtrack and shoved through a blender.

And then comes that riff: a stomping, menacing, groove-heavy killer out of the Robb Flynn songbook. It's a beast, and it underpins what is essentially a slower, more brooding Slipknot song. It's a smartly restrained use of Slipknot's skills.

That said, when the big moments come, they come hard. The breakdown just after three minutes is one of the most simplistic and savagely heavy Slipknot have ever written, smatterings of scratches from DJ Sid Wilson helping to give it a small whiff of the psychotic, genre-mashing approach of their debut.

Death Because Of Death

You can tell a lot about an album by its instrumental interludes: what they sound like, where they're placed and the role they play in breaking an album up into acts.

One of two interludes on We Are Not Your Kind, this fuzzy, unhinged chant-a-long is underpinned by slices of static and tribal drum beats that mimic instrumental trends that run throughout the album. 'Death because of death because of you' moans a mournful, harmonised Corey.

After the full-throttle opening one-two of Unsainted and Birth Of The Cruel, it's a nicely executed break in proceedings – a brief pause to draw breath and ramp up the tension before what comes next.

Slipknot were never a nu metal band, but their knack for big grooves and bouncy riffs meant they found plenty of fans from that generation of metalheads, and Nero Forte shows that they still haven't lost that connection.

The most 'jumpdafuckup' track on the album, this is the sound of Slipknot letting loose and having a blast doing it – Corey even proudly spits 'I haven't felt this way in years' at one point.

It also features one of the most unusual choruses Slipknot have written thus far, sounding like a creepy children's choir mumbling a nursery rhyme from your worst nightmares.

We've spoken already about this album containing all of Slipknot's trademarks and beyond – this song is possibly the most profound example of that.

This track has it all: a glitchy intro, an undeniable groove, nostalgic riffs, that hooky-as-hell melodic chorus, Corey's old-school spitting on the verses, unapologetic kick-your-door-down heaviness and a sinister outro that'll leave your skin prickling with goosebumps. It's pretty much everything you want from Slipknot rolled into one, and then some.

Lyrically, we're moving into deeper territory – 'we tell ourselves it cant be hell if theres no heaven'. Some fans will no-doubt decry the catchy and clean chorus, but this track is no-doubt an album stand-out.

Maybe the boldest and most expansive track on the album, Liar's Funeral runs a startling gamut of emotions. It starts with a melancholic swell of acoustic guitar and piano, sounding initially like it might be the token 'soft' number on here. No chance.

A taught, militaristic drum beat begins to rear its head, before the track bursts into lumbering, marching riffs and an explosion of marauding heaviness in the chorus. 'Burn! Burn! Burn the liar!' roars Corey. He's in an angry mood, and we like it. The song finally simmers back out into acoustic territory, bringing us full circle.

After the boundary-stretching journey of Liar's Funeral, it's a refreshing slap in the face to find Red Flag bringing us straight back into familiar Slipknot territory, that unmistakable rolling riff and rumbling guitar tone serving as the kind of pit-starting mayhem the Knot can probably write in their sleep at this point.

This is one of only a couple of by-the-numbers Slipknot tracks on this album, but that's no insult – from the smatterings of psychotic electronica that permeate the guitars to the bouncy-as-fuck breakdown at 2:30, this is a song one band and one band only could write, and it's executed perfectly.

An instrumental number that effectively serves as a prolonged intro for Spiders, we can only assume that Slipknot have managed to nab the music from the elevator that drops you off in Hell and managed to clear its use on an album. Fair play to them.

Remember what we said earlier about a nursery rhyme? The Nine have gone the whole feral hog with this one. 'The spiders come in side by side / Two by two and night by night / Who is food and who is thrown away?' ponders Corey around a cacophony of scattershot drum beats and creepy piano twinklings.

It's spooky as shit, and it's fun as hell. We highly recommend playing this to your kid while they're tucked up in bed. (DISCLAIMER: Don't actually do this).

Another Slipknot-doing-Slipknot-as-only-Slipknot-can track, this crusher is slightly more traditional than most of the other songs on the album, but only in the sense that it follows that good ol' fast and heavy verse/big and catchy chorus formula.

As always with Slipknot, the heavier parts are still more brutal than anything any other 'mainstream' metal band will ever serve up, and the chorus is a disarmingly nifty little number that'll get hooked in your brain for days.

Opening with a low hum, My Pain is like being in an eerie meditation session where you know some weird shit is about to go down. We love the Slipknot-doing-Slipknot tracks, but when they head outside of the box? We might just love it even more.

Whispering rises up like smoke, segueing into a disorientating section that sounds like a striking clock, and progressing into a claustrophobic industrial nightmare with twisted lyrics about love.

Apparently Clown had a strong hand in this, and it shows. Slipknot x Nine Inch Nails x avant-garde madness = brilliant.

Not Long For This World

Not Long For This World is another seamless blend of every single element of Slipknot we’ve come to know and love: nightmarish, subdued verses interspersed between a heavy as fuck chorus with industrial guitar chugs and powerful, layered melodies.

Then we get to the erratic tribal rhythms, a nu-metal finale and some scratching that leads us into a cyberpunk instrumental, ready for the build up to Solway Firth. Honestly, this tune has everything but the kitchen sink – and yet it somehow works.

After quiet glitches and Corey's sober, folky crooning, Solway Firth kicks off with that unmistakable percussive clatter and pounding riffs.

But it's the brooding underbelly of the song that really lures us in. It builds as the band race along, with those urgent melodic guitar lines that cue Corey's harsh yet catchy vocals. Mournful piano is juxtaposed by more stabbing electronics – tying this closing track to the album's opener, Insert Coin. Corey also repeats his 'I'm counting all the killers' line from the opener here, taking us full circle and making clear to us that as far as this album goes, everything's planned and nothing's by chance. Classic Slipknot.

Even when they pause for breath, the whole thing sounds like it's going to come off the tracks. It's dramatic, a little troubling and downright heavy, and an emphatic exclamation point on a thrilling comeback.