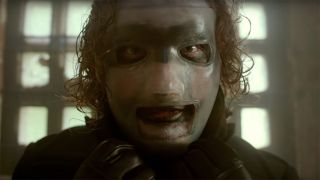 Corey Taylor with his new mask

Last Thursday, Slipknot revealed their new masks in their video for Unsainted and later showed them to the world when they performed a blistering two-song set on Jimmy Kimmel Live!.

The focus was on frontman Corey Taylor’s creation which was designed by horror special effects guru Tom Savini, who has worked on productions including Dawn Of The Dead, Day Of The Dead, Friday The 13th and The Texas Chainsaw Massacre 2.

And in a new interview with Kerrang, Taylor has given some insight into the ideas behind the creation,

He says: “My vision was about trying to create something uncomfortable – not only for me to wear, but for people to look at.

“It’s the representation of public opinion turning on a dime. They want to tear people down for the way they live, even if they don’t really know them.

“It’s been liberating to embrace that side and be like, ‘Fuck you. I really don’t give a shit what you think about me, so here’s this!’”

Slipknot will release their new studio album We Are Not Your Kind on August 9 through Roadrunner Records and will head out on tour across Europe in the coming weeks.

Speaking about the follow-up to 2014’s .5: The Gray Chapter, guitarist Jim Root said: “This is the most time we’ve had to write a record and work stuff out together. One of my inspirations this time around was those artists that recorded full length albums – not just songs.

“While the industry is moving toward singles, Slipknot wanted to make an album experience, front to back.”

We’ve taken a closer look at Slipknot’s new masks and compared them with their 2014 creations.