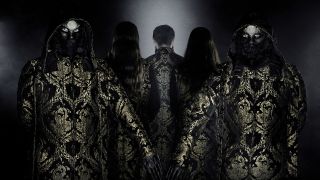 The late summer sky above Basel is clear blue and endless. It stretches over elegant, pastel and slate low-rise buildings still steeped in old-world, picture book charm, community gardens nestled within apartment blocks and the Rhine river that slakes underneath arched stone bridges. Gothic cathedrals rise above the skyline, their steeples like insectoid antennae hoping to catch a whiff of celestial static.

Sitting in a spacious, artisan café in his picturesque hometown, Schammasch frontman and mastermind C.S.R has more than enough reason to be positive. The three full-length releases since the band’s formation in 2009 have grown ever more ambitious – from 2010’s turbulent, black metal-steeped debut, Sic Lvceat Lvx, through to 2014’s expansive, double album follow-up, Contradiction, to 2016’s triple-album magnum opus, Triangle.

Not only are Schammasch visually striking, adorned in exquisitely embroidered cowls and black-and-metallic facepaint like a devout, mystic sect but, at the behest of C.S.R, they’ve charted a personal, if somewhat cryptic odyssey of enlightenment that’s marked them out as one of the most sonically arresting, genre-transcending and spiritually elevating bands to have emerged from the underground in recent years.

“There’s certainly not very much danger in living here,” says the frontman, when asked why Swiss bands – from Samael and Triptykon through to post-metallers Abraham, metal-sampling industrialists The Young Gods, spectral black metallers Darkspace and even pop pranksters Yello – are so naturally geared towards sonic grandeur.

“The majority of the people live very comfortable lives, and also very predictable ones. Maybe that takes away the rawness within the music, but it makes space for something else, which for other bands wouldn’t be within reach.”

After the universal acclaim for Triangle, the high-profile tours supporting Batushka and fellow Basel-ites Zeal & Ardor, and the landmark set at 2017’s Roadburn festival where Schammasch played all 100 minutes of that album in full, C.S.R ought to have been contemplating his next step with renewed confidence. The reality turned out to be very different.

With a new album, Hearts Of No Light, imminent, this is C.S.R’s sole face-to-face interview, an undertaking approached with a mixture of diligence and trepidation, as if he’s trying to tune into and translate an internal frequency whose natural resonance isn’t the spoken word.

“I just felt very empty after Triangle was done,” he says carefully, outlining the Hades-esque path that revealed itself in the album’s wake. “I had a feeling of, ‘I said everything and there’s nothing else to say.’ I just really didn’t have a clue where to go and in which direction to go from there, especially from a thematic point of view. That put a lot of pressure on me, because it’s a pretty shitty feeling.”

It offered an opportunity for creative recovery from the understandably intense Triangle sessions, but it was the attempt to chart the next stage for the band that left him asking hard questions of himself.

“Once I really looked into this situation and looked into the fact that I felt this way,” the frontman recalls, “suddenly something evolved out of that feeling. I reached a point where, if you’re honest about certain things towards yourself, then you can go on from there, instead of just walking into the same wall again and again.”

To find a way forward, C.S.R found a clue in his past. Having abandoned his first band, Totenwinter – a black metal band with the Chernobyl disaster as its central theme (“I was very fascinated by how it got handled and what it did to people. I saw it as a perfect representation of what of what humanity does to the planet, and to itself as well”) – he spent a year in a “shitty” grunge band before reaching an epiphany.

“I realised it was never going to go anywhere, and that it didn’t do anything valuable for me or [anyone] else,” he says. “That’s what the starting point for Schammasch was, basically, which was the exact opposite of what I was doing.”

That willingness to destroy in order to rebuild was alluded to in the opening title track for Contradiction, its first lines a quote from Aleister Crowley: ‘Worship what you’ve burned, burn what you’ve worshipped.’

“It’s a very interesting formula to live by,” says C.S.R, “because it makes you question the things you do and the things you believe in. Everybody gets stuck at one point. Everybody gets trapped within their own dogmas, so burning them down is destructive, but it can also be the most constructive thing you can do – to reinvent yourself every time and start from a new point.”

Triangle’s three discs were representations of separate yet connected states of being: the acceptance of death, the balance between the physical and spiritual worlds, and the ultimate liberation of the soul, free from the demands of the ego. Looming over the next horizon, however, was a reality check.

“The overall goal or message of that album was always a very positive one and a very hopeful one,” says C.S.R. “Everything about Hearts Of No Light is the exact opposite of that. I feel like a lot of what I’d been trying to reach with Triangle, I’d nowadays look upon as illusions, or dead ends even.

"That might sound quite negative, but it’s just more honest than negative. There is a much more sober view on the new album. I think I’ve just given up on certain things that I was trying to explore or reach within the Triangle cosmos, which kind of led nowhere, or they didn’t lead towards the goal I wanted to achieve back then.”

So was it a state of enlightenment that he had been aiming for up to that point?

“Absolutely. And during the process of making the new album, I came to realise that a state of enlightenment is quite a vague goal. Nowadays, I’m discovering a much more earthly, realistic view, ever since I started to really dive into this feeling of emptiness, and really embrace that.

"For a long time I tried to fight that idea. I was pushing it away and not wanting to realise that this emptiness is the starting point for creating a new cosmos within a new work of art. It’s the first time I really felt this emotion while working in this band. It was tough to really accept.”

Running at a relatively restrained 67 minutes, Hearts Of No Light is recognisably Schammasch, but this time around the surging, exquisitely wrought, Behemoth-pacing will to power and the apocalyptic knife-edge drama that roils throughout the album finds no oases of elevating calm.

The atmospheric way stations – A Bridge Ablaze and the closing Innermost, Lowermost Abyss – are states of elegant, awe-inspiring purgatory, beautiful to apprehend yet uncertain in their fate. Darker and more fevered than anything they have released before, the album’s soul-scourging scope leaves you feeling like more than ever is at stake.

If there is one moment of succour, it’s the track A Paradigm Of Beauty. Amid reverberating, post-punk-infused riffs, C.S.R’s vocals turn from a gathering-stormcloud bellow to wracked eulogy: ‘In the midst of burning ruins / Your light was never seen before’ – a calling to a divine spark.

“That’s absolutely what I’m trying to say in that song,” he agrees, “that there is divinity in creativity. I’m telling it to myself as well, because pretty much everything else on the album is putting the process of creation into a negative and destructive light.

"You have to let go of a lot of things, like your picture of what the album should have become and all the expectations you have towards yourself. Something in you dies during that process as well, and at the same time something gets born.”

That seeming negativity reaches its apotheosis in the album’s haunting final track, which is, as C.S.R puts it, “a representation of the endless fall of man”. Is there an ultimate benefit to reaching that point?

“Well, you certainly let go of something by putting it into expression. It wasn’t done because it was a constructive thing to do, it was the necessary point to end the album, which is the absolute lowest point where you could go. It’s not necessarily a negative or a depressed state. It’s just an honest state and a sober state, where I’m not under any illusions.”

Hearts Of No Light may not be brimming with PMA, but it’s a necessary and enthralling step in both Schammasch’s and C.S.R’s personal evolution – a willingness to give oneself to the cycle of death and rebirth, and submit yourself to all the self-examination that entails.

“Honesty is a difficult thing,” he concludes. “You’ve got to destroy a lot of your own self, your own ego, your idea of who you think you are, and it’s a very painful but very rewarding process as well. Because the more you get rid of these shells, the freer you are in terms of what you can become.”

Hearts Of No Light is out now via Prosthetic and available to order on Vinyl, CD or MP3.