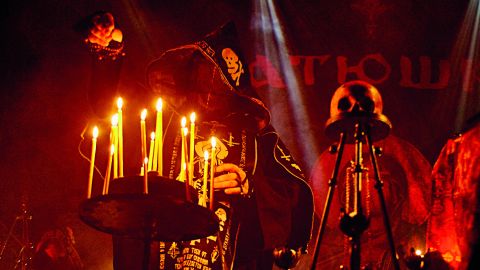 There’s something in the air tonight, and it’s not just the foul stench of blasphemy. For on this Sunday, the holiest of days, a sinister sermon is taking place inside the grandiose surroundings of this historic venue in north London. Opening proceedings are Switzerland’s SCHAMMASCH [7]. With secretive frontman C.S.R draped in his trademark cloak and facepaint, the avant-garde black metallers blast through an hour of spiritual hatred – which is short by their standards. The material from magnum opus Triangle easily stands above the rest of the set, but disappointingly they’re hindered by a muddy sound, losing much of the nuances and subtleties amongst the destruction. Of course, as great as it is to see Schammasch’s pomp and ceremony, tonight is really all about the headliners. Embarking on a European tour, dubbed the Pilgrimage, tonight is apparently BATUSHKA’s [9] biggest ever show outside of Poland, and it’s packed. Despite dabbling in an arguably more palatable brand of extremity, this is a thoroughly metal crowd – not the true cult hordes Watain attract, but Satyricon and Behemoth t-shirts abound. As the lights go down, a hushed silence takes the crowd, waiting to see the hidden figures make their UK debut, and if the fables of their black masses are true. A minion enters the stage and silently lights the myriad candles across the front of the stage, flanking the pulpit on which sit sacred texts and a portrait of Mary. Various other religious iconography and skeletal curios fill the stage, while a gigantic faceless Madonna stares out from the back. True care and attention has been paid to the aesthetic, including the outfits of the eight anonymous bandmembers, led by the beastlike Bartłomiej. Having released their debut album, Litourgiya, in 2015, the band have remained firmly underground, but tonight’s gathering of believers have been baptised in blood of Batushka. Bartłomiej’s baritone bellows ring out across the sold-out hall of sinners, juxtaposed by his glass-shattering screams, and bolstered by the three-man choir of anonymous chanters. Premudrost sends the amassed hordes into raptures, clapping and singing as one wicked entity, having their souls sullied in the process. It’s a short performance (what do you expect from a band with one album?) but enough to satiate the appetite for heresy. But there’s more to this band than onstage rituals and incense; something real and organic is happening here, bubbling below the surface, ready to summon us all down to the depths for eternity.